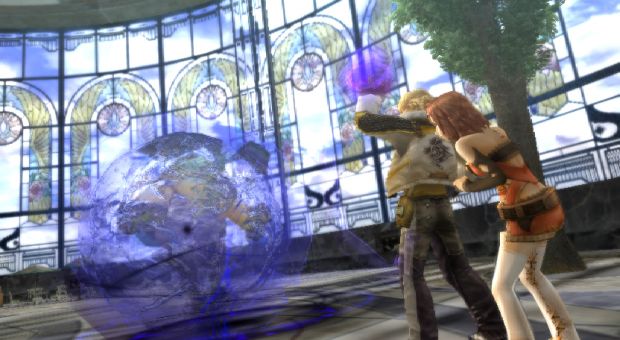 Surely any fan of the Final Fantasy Crystal Chronicles series is wondering what to expect from the upcoming Wii title The Crystal Bearers. After all,you have Bon Jovi doing the music for the commercial (whoa), the ability to use your enemy as your weapon, and the fact that the game has a December 26th release date (why the day AFTER Christmas?).

We considered the best people to reveal all these mysteries and more were probably Square Enix themselves, and lucky for us, we got a chance to talk to them about itm specifically with Crystal Bearers producer Akitoshi Kawazu. Follow me past the jump to learn how much gameplay you can expect to get out of The Crystal Bearers, why they chose to work with a non-traditional control scheme and much more.

Destructoid: In the West, developers can sometimes be more quick to make games where you can do whatever you want, be it good or evil. It seems like there is a lot of that kind of “morally grey” area gameplay in Crystal Bearers. Were open world games such as Grand Theft Auto or Fable an influence on the development of the Crystal Bearers, and if so, what elements did you borrow from those games?

Square Enix: I’m sure there are many people who were influenced by GTA’s success all over the world, including Japan.  I felt as though many people expected that from now on, games based on crime and violence geared towards adults were going to be popular, but I don’t feel as though it was the crime and violence that led to the success of such games.  I feel that the players appreciated the high sense of freedom, and I knew one day, Square Enix would have to create a game with as much freedom in our own way.  FINAL FANTASY CRYSTAL CHRONICLES: THE CRYSTAL BEARERS was a game created based on this foundation.

Destructoid: To follow up on that, which features from those games did you not want to borrow?

Square Enix: Unlike games, the real world can be a harsh and cruel place.  I don’t see why we should have stories and situations that can bring you down in games too.

Square Enix: Expressing a story through a game has always been the common theme, since the time I was involved in creating FINAL FANTASY.  FINAL FANTASY CRYSTAL CHRONICLES: THE CRYSTAL BEARERS is no different.  I don’t feel that visible elements such as the game system or character design define what FINAL FANTASY is.

Destructoid: Third parties have had mixed luck in bringing their “hardcore” franchises to the Wii. What do you think it takes to make a traditional action/adventure game on the Wii a success?

Square Enix: Of course we would love to succeed, but seeing the current Wii market, it will be no easy feat.

Destructoid: Another thing about developing for the Wii is that it’s reportedly much less expensive than developing for the PS3/360. Was that part of the reason that The Crystal Bearers is coming to the Wii instead of one of the HD consoles? Was it easier to get a game this risky made for the Wii, where the install base is larger and the development costs are (reportedly) smaller?

Square Enix: We did not select the Wii console for its development costs.  We feel it is most important for those of us in the gaming industry to create games catering to a wider range of audiences.  But this also does not mean we chose the Wii because of its high installment base, as we have all learned in the case of Gameboy Advance that a high installment base does not necessarily guarantee high sell through per title.

Destructoid: The Crystal Bearers’ use of pointer controls look totally original. A few WiiWare games like Lost Winds and NyxQuest have tried similar “psychic” mechanics, but this is the first retail Wii game (that I’m aware of) that asks players to constantly manipulate objects on screen with the pointer while simultaneously using the nunchuck’s analog stick to control the character. What inspired you to go in this direction with the Wii, as opposed to a more traditional, Twilight Princess-style take on action/adventure gaming?

Square Enix: There was a consensus within the development team that using the A Button attack is simpler and exhilarating, but that would only create a game much like what is already on the market.  Eliminating the existing standard controls forced the development staff to be inventive, therefore creating a game with enjoyment you could not get until now.  For this reason, there are no attack or jump buttons like most action games.  By unifying the controls, regardless if you are interacting with the NPCs, battling a monster or exploring a dungeon, the same controls can be used.

Destructoid: What are some of the things that you can do in FINAL FANTASY CRYSTAL CHRONICLES The Crystal Bearers that you can’t do in a traditional action/adventure game?

Square Enix: Games up until now were typically enjoyed by pressing the appropriate button at the appropriate timing, and punished the player with a game over if you did not do this. In FINAL FANTASY CRYSTAL CHRONICLES: THE CRYSTAL BEARERS, the controls are reliant on the motion sensor, thus establishing a system which must be lenient on mistakes.  In the end, these mistakes and various attempts are what add entertainment value to this game.  Rather than perfect controls, game play with some mistakes provides more excitement for the player and those who are watching.

Destructoid: The Crystal Bearers also features one of gaming’s more original takes on superheroes. The game’s main character reminds me a bit of Hancock, the Will Smith character. He’s a superhero that doesn’t always do the right thing, to the point where it seems that the public is sometimes more afraid of him than anything else. Was Hancock a influence on The Crystal Bearers development? If not, where you influenced by any non-game related media?

Square Enix: We have in fact been compared to Hancock in regards to the setting, but when we began the production of FINAL FANTASY CRYSTAL CHRONICLES: THE CRYSTAL BEARERS, Hancock did not exist, so there were no influences derived from it either.  With that said, TV and film are rivals of video games in the entertainment field, so we did aim to achieve a level that is expected in them in this title too.

Destructoid: What’s your favorite moment in The Crystal Bearers? What part of the game do you think will be remembered for years to come?

Square Enix: Of course the last battle!  The satisfaction of completing a game is incomparable.  People tend to remember the tough times, and for me personally, I remembered every mission and level of the game as an enjoyable challenge.

Destructoid: How many hours of gameplay can we look forward to from The Crystal Bearers?

Square Enix: The first play through will be about 15 hours, which may seem short, but considering it uses the Wii remote, it seemed like the appropriate length of time.  You can also play a second round with the clear data, which we definitely recommend, but to play every single element of the game, 2 rounds may not even be enough!

Destructoid: Thanks so much for your time!