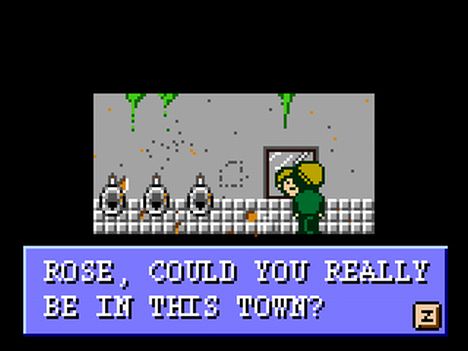 I made no secret of the fact that stumbling across the Silent Hill II demake Soundless Mountain II last week was one of the most thrilling gaming moments I’ve had all year, not only because it was based on one of my favorite titles of all time, but also because it allowed me to see a Silent Hill that I might have discovered as a kid in my NES days. Next gen be damned, I had to know more about this game.

As is the norm when I get a jolt of inspiration, I tracked down the game’s creator, Jasper Byrne, with all the fury of a rabid wombat. Jasper was kind enough to not only answer my questions but also talk about what goes into a demake and spill some dirt on his newest project in the works.

Destructoid: You must be a big fan of Silent Hill II. Tell me about what inspired you to create Soundless Mountain.

Jasper: I’ve entered into two TIGSource competitions before (Emo Harvest on the Oregon Trail for the Videogame Name Generator compo and The Germinator for the Procedurally Generated compo).   I think the thing that keeps me coming back to the compos is the fact that I actually get things finished if I have a deadline!
When the ‘Bootleg Demakes’ compo was announced I knew I’d make one of two games – either a Street Fighter RPG or a NES Silent Hill 2, simply because they’re my two favourite games of all time.

It started with a simple mockup, and then I began to realise that the mechanics of SH2 might work just as well in 2D, as long as I could simulate the ‘difficult’ camera, as well as the fog.  I ended up making the camera have its own path that isn’t necessarily the same as the player’s path, so I could create tension by ‘pushing the player up against the edge of the screen’.  As far as I know, I haven’t seen this done in 2D before… but I’m sure someone’ll prove me wrong!

Silent Hill 2 means a lot me.  No game has ever conveyed so perfectly the human condition.  Everything is there for a reason, even the red herrings.  All of the gameplay and audiovisual elements are based around telling the story, and not the other way round.  Everything in it re-enforces everything else with extra layers of depth and suggestion.  The story is one we can all relate to – a man going through pain and loss, and it shows how fine the line is between being an ‘everyman’ and being a ‘bad man’.  It’s a tragedy in the classic Greek sense, although the tragic act has already been committed when we begin.

The theme of illness also made it particularly resonant for me, as my dad recently passed away from cancer.  Because of this, making the game was a little traumatic at times.  I remember watching the ‘Making of…’ video for SH2 and seeing the project leads get the team in and ask them to ‘meditate on pain and suffering’ (a  Buddhist idea used in a strange context) – and I realised while making it that mindset was totally necessary, yet not very comfortable or easy.  It wasn’t that the game was hard to make, but it wasn’t an easy mental place to be!

Destructoid: I know it must be a lot of work to create a project like this. Do you ever plan to complete the game?

Jasper: What took longest was probably just my analysis of the original game.  I spent about ten or fifteen hours looking at every detail of the first 15 mins play of SH2, making notes about pauses, transitions, sounds, camera and ‘feel’.  It was then just a case of seeing if the same thing could be done in low-res 2D.  I spent a lot of time on the sound as that is perhaps the most defining part of SH2, and I am a drum’n’bass DJ by trade (under the name ‘Sonic’) – so getting that spooky sound design right was really important to me.  I also really admire Akira Yamaoka who did the sound for the SH series, and actually became the lead designer on the fourth game.  He’s the only other musician / game-designer I know of!

I will complete the game in the sense that I want to put in what I originally planned – the journey through the grim apartment buildings, leading up to the encounter with ‘Polygon Head’.  There wasn’t time for the compo, but I’m working on it now, and already have the handgun, various apartment rooms and a new enemy – the Mannequin.  It’s getting a lot darker in the new version – those cramped corridors are very claustrophobic!

Destructoid: Was your interest in demakes specifically sparked by this project, or have you created them before?

Jasper: No, I’ve always made original titles, although I did make a game kind of based on Bubble Bobble before.  When making a game normally, it would feel like a waste to not use an original idea, as I have so many that won’t get made even as it stands!  But there was an opportunity with demaking SH2 to perhaps discover some small part of the magic that Team Silent created with the title – really my motivation was to try and learn Team Silent’s way of thinking, as well to express my undying love of their title, haha!

Destructoid: What other demakes inspire you?

Jasper: Funny enough I don’t think I’ve ever played a demake before, although I always enjoy seeing how companies approach, for example, hand-held versions of triple A titles.  I think I actually prefer Civilisation Revolution on DS to PS3.

Destructoid: What other games would you like to see “demade’?

Jasper: I like the idea of seeing games which have introduced new mechanics since the 2D era put back into pixel form.  A game like Super Mario Galaxy would work great in 2D I reckon, and could be even faster and more fluid.  Because I have a love for big bosses in 2D, I’d also love to see Shadow of The Colossus with enormous sprites (Ico would make a great platformer too).

In fact, something I think got missed out on in the games industry transition to 3D is that we had all this new technology but it hasn’t really been applied back into 2D – realtime shadows, lighting, filters, shaders, film grain, potentially huge sprites, more detailed animation etc…  I’m hoping to redress this balance somewhat with my next game, Amnesia.

Destructoid: If you could make any type of game at all, what would you like to create?

Jasper: Well there are a few genres that are closest to my heart, and point’n’click adventures are probably my biggest weakness.  I’m sad that the greats of yore (namely Lucasarts and Revolution titles) have never been equalled or surpassed.  There are some great-looking modern adventures, mostly from the non-UK parts of Europe, although none has had anything like the compelling story and sharp dialogue of those old games.  I think one of the reasons I got into Survival Horror games was that they in some ways echo those old mechanics of item puzzles (although greatly dumbed down.)  That and the potential to tell a great story, which I think is my main interest as a game designer, and what Silent Hill 2 did so well.  I’m interested to see what Quantic dream come up with in Heavy Rain though.

Destructoid: Do you have anything new in the works?

The “serious” title that I’m working on, besides Soundless Mountain II, is called Amnesia.  It’s now in a pre-production phase and has changed from being a classic point and click to more of a Survival Horror title, partly due to the fun we had making SMII, and the great response it had.  The story is essential the same though – it’s about a Japanese man called Aruku re-discovering his identity through dreams and nightmares, in a recurring Groundhog day.  Solving puzzles ‘positively’ will give you a piece of a jigsaw puzzle that is white, solving them ‘negatively’ will give you a red puzzle piece.  When the puzzle is assembled you will regain your memory, although the ending depends on the makeup of your physical jigsaw puzzle.  It deals with the theme of isolation from society so present in modern Japan (I lived in Tokyo until recently.)  In fact we hope to really tackle some issues about modem life with this game, the distance and loneliness people can feel even when surrounded by others.

Visually we’re using what we call a ‘Moving Mosaic’.  This is our tech term for chunky, grainy, dirty hand-drawn pixels with lots of noise and filtering.  As well as this we have dynamic 3D shadows, so the torchlight will be spectacular!  It still is very self-consciously low-res pixel art, but with a modern twist, scaled up 4 times as in SMII – although it is in a higher resolution than SMII and with no colour restrictions.  We using rotoscoping like the Amiga Prince of Persia or Another World to get that really hand-drawn feel to the animation.  There will be a lot of ‘being chased’ in the game, and you’ll have to escape this unkillable protagonist time and again by any means necessary, pulling obstacles in his path, cutting rope bridges etc.  Dreams will range from flying to escaping a filthy prison, and that’s all I can give away at the moment!

Destructoid: It sounds great. I hope you’ll keep us posted as it evolves! Thanks for your time.