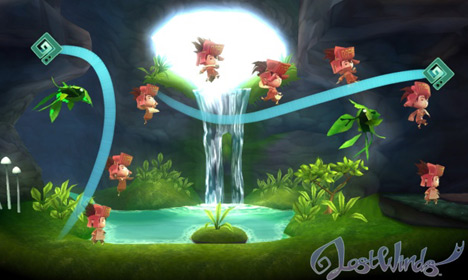 If you’ve heard anything about Nintendo’s recent launch of WiiWare, then you’ve heard of LostWinds. Despite going head-to-head with a Final Fantasy game, Lost Winds has still managed to be the focus of nearly every gaming media outlet’s coverage of Nintendo’s new downloadable game service. Created by Frontier Developments, a low-profile European developer, LostWinds could go on to be gaming’s biggest Cinderella story of the year.

I recently had the opportunity to pick the brain of Frontier’s Founder and Chairman, David Braben. Hit the jump for David’s thoughts on game development, working on WiiWare, and what Frontier has in store for us next.

Destructoid: How long was LostWinds in development?

David Braben: LostWinds is one of many strong ideas we have built up over time, and it gathered a number of very enthusiastic internal advocates who worked on the story, game design, art direction etc.

Many third parties fear producing games for Nintendo consoles, as Nintendo has a history of dominating the software sales on their own consoles. Why did you choose to develop Lost Winds for WiiWare instead of Xbox Live Arcade or PlayStation Network?

To be honest, we never even thought about the issue you raise — when we heard about the service and its aims from Nintendo, it seemed to us like LostWinds was exactly the kind of game they were trying to encourage with WiiWare, something specific for Wii that innovated around the controller. So we took them at their word. LostWinds was only ever intended as a Wii game, and so XBLA or PSN were not on the cards. That’s not to say we’ll never do a game for those services, but when we do it will be a game that is suitable for the audiences and consoles they address.

What were the downsides of making a game for WiiWare, as opposed to for other downloadable game services ? What would you change, if anything, about the way WiiWare is currently structured (*hint* hard drive *hint*)

We’ve never done a game for other downloadable services, but we have worked on just about every console there is. So we already had Wii experience through Thrillville: Off the Rails released last year. The only thing we needed to be aware of with a WiiWare title is that there is a smaller file size than if it were a disc based game, to save on download times. During any game’s development we are always conscious of certain limits so this is not actually that different an undertaking for us, we’re just working within a different number. Other than that, the same production values apply to LostWinds as they would to any disc-based game we do.

Sure it would be great if there was a hard drive, but that would increase costs of the hardware, so there are swings and roundabouts to these issues.

How do you feel about LostWinds‘ reception thus far, both critically and commercially?

It’s amazing! With any game you eagerly await people’s “verdict” on the game, and even more so with LostWinds, because it is the first game that has come “fully formed” from Frontier’s [internal] Game of the Week forums (which is mentioned in the credits, by the way) — everyone at the company feels a strong attachment to it, like a parent.  It’s very rewarding to have so many people enjoying what we did, and making such kind comments on it.

The only aspect of LostWinds that is consistently criticized is its length. Why is the game so short?

I don’t think its *that* short – when we were doing focus tests it seemed like it averaged four hours plus for people who haven’t seen the game and puzzles before and did a bit of exploring in the world.  The game only records ‘successful game-play’ so the time-stamp on save games judges it a little low if anything.

We have had a very high number of players contacting us, uniformly to say very positive things about the game, people saying it’s the best money they’ve spent on a videogame for years.  On the evidence we have, it seems that people are enjoying the experience and not clock-watching!

LostWinds exists in a strange place in today’s gaming landscape. I’ve heard from many developers that trying to get a 2D platformer made today on a home console, even as downloadable “budget” title, is still no easy task. Why did you decide to keep LostWinds on the 2D plane?

The accessibility and focus of the 2D platform genre has always made it very popular with both players and developers — in our game Thrillville: Off the Rails, for example, some of the most popular sub-games were the 2D games like Sparkle Quest and Bandito Chinchilla, even though we also had kart racing, first-person shooters, and so on, in glorious 3D.

The focus offered by 2D allowed us to explore the control system more fully, and use the opportunities offered by the Wii to experiment with new ways to engage the player.

What inspired the initial creation of LostWinds, and did the game go through any drastic changes over the course of it’s development?

As I mentioned, at the time we were already brainstorming what we could do with the Wii controller. The game idea itself came from Steve Burgess, one of Frontier’s designers, who was watching the trees and leaves from the window on a windy day. He remembers thinking about how many ways the wind shapes and manipulates different things within the world, and if only there was some way to become the wind in game. He then applied this train of thought to the Wii controller.

The LostWinds core concept was nurtured for a quite a while inside Frontier, so when we went into full development this meant the visuals and game-play already had solid focus, making the actual development amazingly smooth — probably the least amount of work has ended up ‘on the cutting room floor’ during LostWinds than any of our other games; it was actually quite remarkable how it transferred straight onto the screen.

I heard through my inside sources that you recently had an online get-together with Luc Bernard, creator of the upcoming WiiWare game Eternity’s Child (and Destructoid community member). Do you consider yourself highly aware of what other developers are doing? Do you play a lot of games yourself?

Yes, I’m still a gamer! I play a lot of games, unless we’re at an exceptionally busy time on a project. So I do see the fruits of other developers’ work that way, although actually I’d say we are quite insular — we have always had a very strong vision as to how we see the games industry developing and are pretty focused on our own future plans.

What can you tell us about Lost Winds 2? Please, tell us everything you can!

The enthusiasm of the team who developed the Lost Winds concept meant they created a very detailed, coherent world and back-story for the game. There are a lot more game-play ideas and story waiting to come out of Mistralis, but we feel now is the time for people to try LostWinds for what it is, and then hopefully when we are ready to talk about another game they will remember a positive experience and feel that they want to sample a new experience in the world.

How many titles is Frontier currently working on, and on what consoles? Any retail games in your future?

We’re currently developing three major disc-based titles for a mix of Wii, Xbox 360, PS3, PC. Two we can’t talk about yet and one called The Outsider, which is a third-person action-thriller that allows the player to influence the story of the game to an unprecedented degree.

Bonus Question: Any chance Mr. Destructoid can make a cameo in Lost Winds 2? (Hey, it’s worth a shot!)