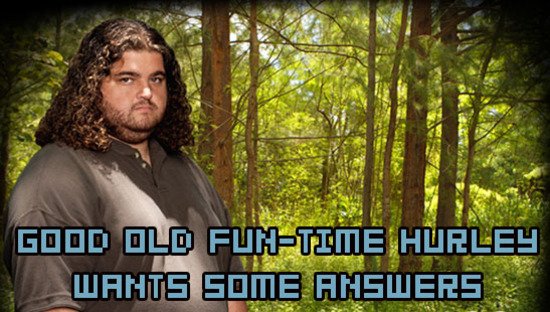 Some people call him the hatch cowboy; some people call him the gangster of love. But to us he’s just Hurley, the immensely likeable everyman on the TV show Lost. For series stalwarts, Jorge Garcia has become the main reason to continue tuning in during the show’s occasional low points (see Sun and Jin Flashback Filler Vol. 12). Jorge’s affable personality and admirable character traits shine through in his acting on the show. If you ever imagined yourself stuck on that island, chances are you imagined yourself as him. In real life he’s got a sense of humor, he avoids drama, and he’s also a gamer. He’s one of us.

Last week, the show’s producers hosted a panel at Comic-Con where they debuted the trailer for Ubisoft’s Lost: The Game, headed for the PlayStation3, Xbox 360 and PC. Jorge and I got together last night to discuss the game’s potential. The interview began while we lounged in the hot tub on the roof of my high rise condo in West Hollywood, where we binged on the gold-plated bottles of Armand de Brignac that my wait staff served us. After I loosened him up, Jorge invited me to go on vacation to France with him and Evangeline Lilly. Then he drunkenly blurted out what the black cloud means and how the entire TV series will end.

At least that’s how it played out in my head. We really just chatted over the phone about videogames.

Have you seen the trailer yet for the Lost videogame?

Did you know you were going to be in the Lost game? Or was it a surprise to you?

I didn’t know exactly what they were planning on doing, but I knew there was a good possibility I’d be in there, because that would help move the game if they involved the actors on the show.

So you didn’t have to go in and do any scans similar to the McFarlane toys?

No, I haven’t done anything for the game yet. I haven’t been contacted about doing voice or anything.

What are your first thoughts on the game and on seeing yourself represented as a video game character?

It looked pretty good. I think they got it from the show and I think it transferred well.

For a lot of people, part of the visceral thrill of playing videogames is getting to do things they couldn’t in real life, whether it’s something benign like gaining super powers or something darker like hijacking cars. Now that you’ll actually have a representation of yourself in a video game, are there things you’ve been dying to try, if you’re a playable character?

Yeah, it’ll be fun just to kind of abuse my cast mates and stuff like that, put them in different situations and positions.

Are there some hidden aggressions you’d need to take out in the videogame?

Oh, no. It’ll be strictly in fun. But I’ll probably try and record it so I could share it later with friends.

Speaking of abusing the cast, there’s some racy fan fiction that’s floating around on the Internet. Have you read any of the love triangles between you, Sawyer and Jack?

Me, Sawyer and Jack? No I haven’t. That’s an update. Around season one we found some of these fan fiction stories. We printed them out and passed them around to other cast mates and we’d have them read these stories that featured themselves in various rough situations and combinations. They all had a good laugh about it.

People who play video games worry about movie tie-ins. Putting it nicely, they don’t have a reputation for being very good. There have been recent exceptions like the Godfather and Scarface games, and The Warriors. Are you at all worried about Lost: The Game? Do you have your fingers crossed that it won’t suck?

Yeah, of course. I think that there’s almost a higher level of scrutiny for a game based on a TV show. It’s been in the works for a while, so hopefully, with that lead-time … you know, they didn’t just rush something out to the market. But yeah, I’ve got my fingers crossed.

Damon Lindelof and Carlton Cuse (two of the show’s producers) announced at Comic-Con that they had a Lost writer working pretty closely with Ubisoft. That got my hopes up.

I’ve definitely heard you’re a fan of videogames. When did you get into them and what kind of games do you enjoy?

I’ve been into them for a while, when I was a kid, you know with Atari and the NES. Then I kind of put them aside when I was in college. I knew if I owned a system it would occupy a lot of my time. Later, a buddy of mine who worked for a company that makes games, he got me a Game Boy Advance, and that was my first step toward getting into video games again. And then at a silent auction I won an Xbox, and since it was for a charity I got to write off my Xbox purchase.

After I moved to Hawaii a buddy and I both got Xbox Live accounts so that we could catch up that way. Since then, I’ve tried to keep pretty up to date. Having a little disposable income benefits that. I bought the PS2 just so I could play Guitar Hero. I have a Wii now and an Xbox 360.

Are there any particular games for the Atari or NES that you remember fondly?

For the NES, I loved Kid Icarus. I used to love the challenge of it. I also enjoyed Castlevania. Especially once you got the boomerang. It made it so much easier.

Are you downloading any of the games off the Wii’s virtual console?

No. I haven’t connected my Wii online yet. I have my cable internet connection reserved for my 360. The games I have for Wii are Rayman, Super Monkey Ball, Call of Duty 3, Trauma Center, Zelda, Excitebike and Red Steel. I keep going back to Wii Sports. It’s the most fun with a group of friends when people come to visit. It’s fun to play tennis and make each other’s little faces. That’s my favorite part about the Wii.

Have you played Wii Sports against any of the Lost cast members?

No, just friends and family so far.

Have you heard of the Xbox Live celebrity tournaments called “Game with Fame”? They’ll have people like Jack Black or the guys from Green Day come on and play against the public. Is there any game you’d totally kill us in if we ever challenged you?

I’ve never heard of that. That’s cool. I’d need at least a week to try and get good at a game first. I don’t know. Whenever I’ve gone out and played against the public, I get creamed! It’s impossible! But that’s an interesting idea. It could be fun. Usually my buddy and I do co-op missions when we go on Live. The last game we went through was G.R.A.W. I just got out my old Xbox to play Future Tactics again.

Are you and Dominic still kicking those PSPs around?

Yeah, for the PSP we used to play FIFA. He turned me on to Lemmings. He got that early from the UK. I’ve also got Katamari and LocoRoco.

You’re somewhat known for your good taste in music. One of our readers loved your Clap Your Hands Say Yeah recommendation. Do you have anything else for us?

Oh man. No pressure, huh? I did just recently see the movie Once and I immediately went out and bought the soundtrack. Straight from the theater to the store to buy the soundtrack. Glen Hansard and Marketa Irglova do most of the stuff. They’re the songwriters in the movie. I had to just go out and buy it.

One last question, Carlton Cuse announced at Comic-Con last week that Libby will return for the fourth season of Lost. A lot of Hurley admirers consider your storyline with her in the second season one of the high points of the show. Do you miss working with Cynthia Watros? Are you excited about the news that she’s coming back?

Yeah, of course! Without question, some of the most fun I’ve had on set was with Cynthia just hanging out in between takes. So if she comes back I’ll be very excited.

Thanks so much, man. You’ve been very generous with your time. I’ll have to send you a Destructoid t-shirt in the mail!