Some of our European members might recognize Germany-based developer Master Creating and its action role-playing game Legend: Hand of God, which was warmly received when it released there last year. After receiving a positive reception in its home country — such as winning Best RPG of 2007 at the German Developer Awards — Legend will finally be making its way to North America when it releases on August 1 exclusively for the PC, thanks to publisher THQ.

I had the chance to talk with Master Creating’s co-founder and creative director Jan Beuck about Legend’s cinematic combat system, extensive character development, and why, exactly, the mouse cursor transforms into a light-emitting fairy.

The full interview can be found, as always, after the jump.

DESTRUCTOID
Legend: Hand of God is an action role-playing game, but does the focus tend to be more on the action (slicing through hordes of ferocious monsters) or the role-playing (story, character development, NPC relationships) aspect?

Jan Beuck
Legend has a stronger RPG bent than comparable titles. While you will spend most of your time fighting monsters, the world, the story, and the character development play a bigger role than in typical action-RPGs. For example, you can travel through the entire world without level breaks; there are multiple-choice dialogues, lots of sub-quests and so on. Additionally, we implemented many innovative features; for example our unique mouse cursor which takes the form of a small light elf – a character in the game world. Not only does it constitute a sort of sidekick to our hero, but it’s also the player’s light source, illuminating the dungeons and casting dynamic light and shadows. 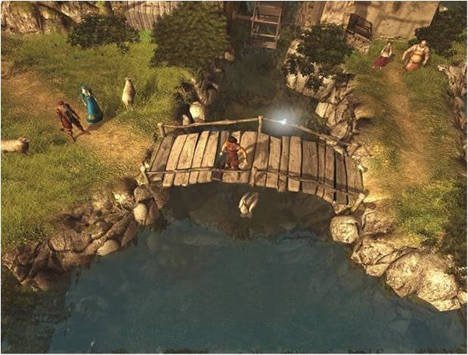 How customizable will the main character be? Is his development based on class levels or a skill point system? Is there any sort of morality system or is the main character, who was about to be ordained a paladin at the game’s outset, stuck following the path of a “goody-goody”?

You can develop the hero in a multitude of directions: skill trees offer you the opportunity to develop a straight-up warrior or a powerful wizard, as well as any number of hybrid characters in-between. Combined with the different magical disciplines and weapon specializations, this provides for a large amount of interesting combinations. You can wield flaming swords if you combine fire magic and swordsmanship for example, or shoot frozen arrows by combining long-range weapons and ice magic.

As for morality: there is no “system” for being good or bad. And you can´t be plain evil because of your, well, role. But in most dialogues you can chose between being – what we call – “nice” or “tough”. For example, a woman seeks your help because she lost her son. You can´t kill her, but you have the option to help her – with or without a reward – or not to help her at all.

One of the game’s highly touted features is the Cinematic Combat System. How exactly will it affect the way battles unfold?

The unique quality of Legend‘s combat system comes from the spectacular portrayal of the fights, paired with a simple and intuitive control scheme. In other action RPGs, combat is generally very repetitive. The monsters – big or small – are always fought in the same manner, which means combat gets boring quickly; it turns into a mere comparison of stats instead of an exciting duel.

One of our biggest aims is to change that – with the help of the Cinematic Combat System, which generates cinematic-quality combat that looks as though it’s been choreographed, but is highly dynamic at the same time. It takes into account the size of the enemy: you can simply clobber smaller enemies (e.g. goblins) from above, who have to jump to even reach you and deal damage. But this is reversed when you meet a larger-than-life monster – now you’re the one who has to leap, and blocking their powerful swings is out of the question – you’re only option is dodging. Some enemies are 3 times as big as the hero; some are bigger than the whole screen! And this leads me to the second important point: if an enemy carries a shield, he actually uses it to block. If he has a sword, he parries – with an axe he has to try and dodge. This way, the style of combat changes dynamically according to the weapons used and the attributes and skills you have chosen. 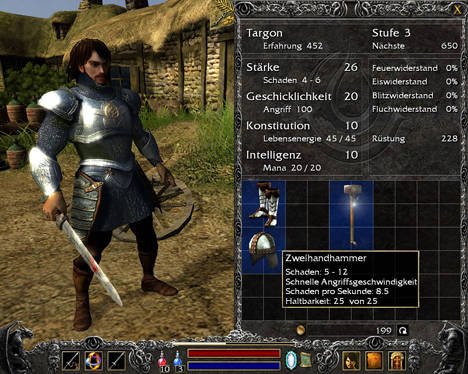 How will the game’s magic system work? Does it have an equivalent to the Cinematic Combat System or will aspiring mages be forever casting jealous glances at their melee counterparts?

The magic system is classic. You can learn spells in the skill trees and cast them instantly by pressing a mouse button or shortcut keys.

How long can we expect a playthrough to last? Will there be plenty of side quests to expand the game’s length?

That depends on your experience and the way you play this kind of game. The average player will need 20 to 25 hours or longer. There are lots of side quests, even quests that can be solved just through dialogue – which is very unusual for an action-RPG. But I think the most important point is that each quest tells an interesting story that also gives you a deeper insight into the world and the way the different people and races perceive it.

We decided to have the dungeons in Legend generated randomly while at the same time the outside world is built completely by hand. This way, Legend offers the best of both worlds: hand-designed, detailed environments combined with variable, randomly-generated dungeons with near infinite replay value.

Why did you decide to have the game’s cursor also serve as the character’s primary light source? Does its shape — that of a fairy — signify that it’ll also act as a sort of in-game sidekick, or, like in The Legend of Zelda: Twilight Princess, was it a purely cosmetic choice?

She´s the hero´s sidekick. The hero and Luna talk to each other from time to time and as they have very different personalities, this is often very funny. Also she is really needed as a light source in dark places, and there are a plenty of dark places in LEGEND… 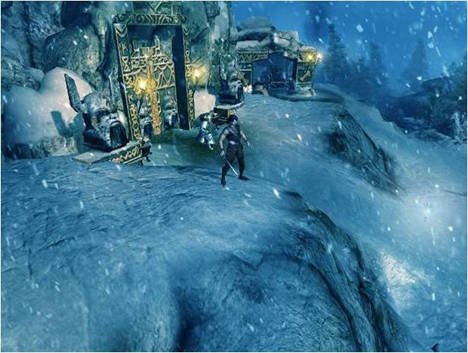 What prompted Master Creating to create its own game engine — the Master Engine — for Legend: Hand of God? Will you be licensing it out to other developers or keeping it in-house?

We would license it if somebody needed it for an interesting project, but we want it to stay exclusive and not become a mass market solution like Unreal Engine 3. Interested developers can visit www.master-creating.com.

Seeing as how videogame consoles have been getting so much more attention lately, why did you decide to develop Legend: Hand of God exclusively for the PC? Are there any plans to bring it to different platforms at some point down the line?

We have a license to develop for X-Box 360, but the open game world and the mouse-driven game play wouldn´t work well there, so we decided to create LEGEND exclusively for the PC.

Thanks to Herr Beuck for his time, and be sure to keep your eyes on the frontpage for a Legend: Hand of God contest that will be gracing Destructoid in the near future.