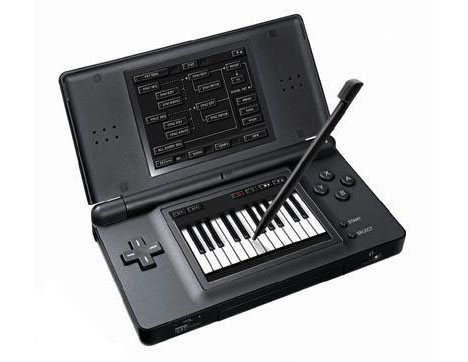 The Korg DS-10 is musical-creation software and a synthesizer on a Nintendo DS cartridge. What a crazy idea! We wanted to talk to the people behind the idea of putting a synthesizer and music-making software on a portable game system. Fortunately, we had the chance to speak with composer/sound designer Nobuyoshi ‘snodg’ Sano, the musical genius behind many popular videogames, including several the Tekken and Ridge Racer series games.

Thanks to an after-work drinking session and his years of musical expertiese, Sano became one of the producers of the Korg DS-10.

Continue on to read our interview with Nobuyoshi Sano.

Destructoid: Some big names in Japanese videogame music came together to create the DS-10, yourself and Mr. Mitsuda included. Who originally came up with the idea of bringing a synth to a game system?

Nobuyoshi Sano: I went drinking with Mr. Okamiya of AQ Interactive, who is the other producer for DS-10 awhile ago and we started talking about how great it would be to make a synthesizer for the DS.

We know that this is an emulation of the classic electronic instrument, KORG MS-10. What made you choose this instrument over any other?

While we were drinking looking at an open DS, the shape looked like a KORG MS-10! So we said, “Let’s put a MS-10 into a DS!” Also, the very first synthesizer I bought was an MS-10, so that was another reason why we chose that model.

How cooperative was KORG? They were obviously happy enough with the end product to put their name on it, but in the beginning, was this title a difficult pitch?

When we presented the idea to KORG they were in the midst of doing some research on the DS. KORG is a very open-minded company and eager to take on new challenges so we had no problem pitching this title to them.

Thanks to the presets and some great demo tracks, it’s easy to jump in and create music. But the more advanced parameters may confuse newcomers. Was there any concern that the software may be too complex for new users?

Our sole goal was to create a solid synthesizer on the DS, so to be honest, we really didn’t consider the new users very much. Also, when I purchased the MS-10 I was 13 years old and it fully immersed me and showed how fun it is to use a synthesizer without being too confusing, so I didn’t think it would be a problem.

In the development process, were there ever any reservations about bringing a full-blown synthesizer to a handheld game console?

Before starting the project we discussed with our co-development companies KORG and PROCYON STUDIO, which handled all the sounds other than the Synth engine part, and they both said with confidence that this could be done so, we didn’t have any doubts or concerns while in development. On the contrary, when KORG brought in the first prototype version on the DS, I had this sudden urge and even anxiety to hurry up and finish this project in order to “show-off” this title to everyone as soon as possible.

We’ve already seen the DS-10 used live, including alongside live instruments. In the creation process, were you mindful of its live use possibilities? What did you do to make it performance-friendly?

I did not think the live performance using the DS-10 would be this big and widely accepted. For functionality, the implementation of the MUTE button and SOLO button for each tracks in the PATTERN MODE were for the purpose of live performances. We see a lot of YouTube clips using these functions in ways that our development staff didn’t even imagine when we were creating them.

We’re sad that we missed your performance at Extra- Hyper Game Music Event 2008 this year. We heard you performed arrangements of your music from Ridge Racer and Ridge Racer II. What were your highlights from that event? Did you perform any solos on the touch pad?

At Extra, the very popular game in Japan, Idolmaster, which is a music rhythm game which you become the producer of a pop star, WE did a live performance and that was the highlight of the event. I was really happy that our “Trio the DS-10” got a lot of hype and cheers too.

Also, Mr. Okamiya from AQ Interactive did an awesome solo play using the KAOSS Pad that was equivalent or even more powerful than his guitar play, and that really rocked the house. (Mr. Okamiya is the guitarist in the hard rock band “THE BLACK MAGES” which Final Fantasy’s Mr. Uematsu is also in)

Now that you have a strong team and a working relationship with Korg, is there any chance you’d release another DS musical product? Maybe a ROMpler like the M1, with a built-in sequencer?

We would love to continue making more products like the DS-10 in the future. Please look forward to them!

Thanks so much to XSEED and Nobuyoshi Sano for their time. Make more synths, please!