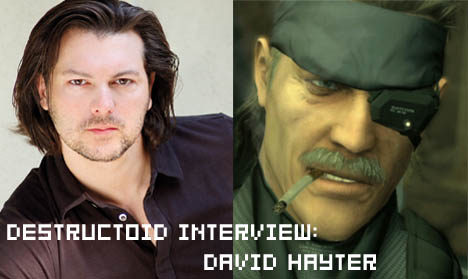 He’s heard it a million times by now, but I just had to say it again when meeting David Hayter, the voice of Solid Snake in Konami’s Metal Gear series. Aside from voice acting in numerous videogames and anime series, Hayter is also an accomplished actor and screenwriter. But, for this meeting, he’s good ol’ Old Snake, taking a smoke break to chat with Destructoid about whatever aged special ops agents like to talk about.

Hit the jump to read our interview with David Hayter and find out why he hasn’t finished Metal Gear Solid 4 yet.

Destructoid: I just finished Metal Gear Solid 4. You did an incredible job, by the way.

David Hayter: Oh? Thank you. I’m only up to South America so far.

Yeah. People say, ‘Don’t they give you an advance copy?’ No, they give me a copy once they finish the game. Then I get my free copy sent to me. I’m like, ‘Thanks, that’s great,’ and then sign it and give it to someone else. [laughter]

I have to ask: how many times did you actually grunt in Metal Gear Solid 4? Was it just like 10 grunts that they reused over and over?

[grunts] No. It’s every single time. It’s again and again and again, and it’s become a thing now. So, the director, Chris Zimmerman, who does the English voice directing, will just say ‘I want a sound here.’ He’ll ask for a frustrated sound. [Hayter gives a grunt example] That sort of thing.

It’s the sort of thing where your leg is caught on something. [gives a very pronounced example] We call it Grunt Acting, actually. So they’ll say that ‘we need a little grunt acting here,’ and we’ll do it.

There’s a name for it? Wow. While I was playing the game, I thought that taking shots whenever you grunted could make for a decent drinking game.

Yes! Everytime he grunts? Sure.

Plus, it got to be funny. [laughter]

I wonder how many you could do of those.

Now that Solid Snake is in retirement, we hear that Big Boss could be the main character of future Metal Gear games. Have you heard that?

I just heard it from Dale, from Destructoid.

Good! I was wondering if you would be interested doing Snake’s Daddy’s voice in these future games.

Of course. Of course, yeah.

How would his voice be?

Well, he’s the same guy! Well, I played him in Metal Gear 3. He’s got the same vocal cords, and he’s got the same physical constructions, so I think vocally he’s going to sound the same.

You know, it’s more about changes in character. It’s about where the character is at at any given moment. I think Solid Snake really got screwed over in his life, whereas Big Boss had a little more control over what he was doing with his life. Solid Snake was just a clone who was just kicked around for his whole life, and I think that difference would show up in the character. I think this because I’m the voice of the character, but that’s what defines him for me, so I think that that’s the touchstone that you should feel from one to the other.

Since you know the character so well, do you feel that Solid Snake’s story came together well?

Yeah. Like I said, I haven’t seen Metal Gear Solid 4 all they way through. Of course, I’ve read the dialogue, but sometimes that’s clearer than others. Sometimes I watch the scene and go, ‘Oh, that’s what was happening?’ [laughs] You know, because I’m just watching motion capture actors on a stage with like, 2×4 vehicles and stuff like that. And it’s just this fixed, videotaped shot. In the computer, they go in, and the camera moves around. There’s so much detail and beauty to it that it really becomes clear what the hell we were doing.

I think they worked out some things in terms of the Patriots. I found out some things that made the story more clear to me. And for Snake, I don’t know if it’s entirely clear in the end, but I don’t think that any Metal Gear game is supposed to be entirely clear. I think that ambiguity is part of what makes it interesting. And, to me, it’s not about the details of his story. It’s about the purity of the theme of the character, which is a guy who is so good at his job… He’s a Special Forces legend, and yet he’s always screwed over by his superiors. He’s always screwed over by the situation, and he doesn’t know who he can trust. And it’s sort of like a guy who is built for this structured world, and the structure always works against him. And as long as that remains true all the way to the end, which I think it did, it’s pretty good.

Do you feel that Metal Gear needs a movie?

Does it need a movie? No. Do people want to collect the money that would be made from a movie? Sure. [laughs]

I think that any time that a property is as valuable as this one, they’re going to do it. It’s not a question of if there is a need for a movie, it’s a question of how do they ensure that the movie is good, and worth watching.

I think, because of the scenes — there’s so much movie in every Metal Gear game — it’s like, well, do we really need to see a bunch more talking about Metal Gear? As a movie adapter myself, I would never take those scenes verbatim and put them up on screen; it wouldn’t make any sense. I mean, a lot of times it doesn’t make any sense in the game. But you’re sort of speaking a language that all of these fans would understand.

In a movie, you’re going to want, for the lack of a better term, a more American style of dialogue. Tighter scenes. Themes that aren’t quite as ambiguous, that speak more to Americans. You’re really watching a Japanese perspective of American military power, where as it would be interesting to me to see the American perspective on what American military power has become. Now it’s kind of dubious right now, so it’s an interesting time to sort of explore that.

How important do you feel voice acting has become to not only games, but animation and movies as well? Do you see the field growing?

I think that in the earlier days, like with the first Resident Evil, for example, [laughs] when you have the developers doing their own voices in the games, you had people that didn’t know how to write scripts. They made amazing games. I’m not calling out Resident Evil; I thought it was a great game. I loved it. But scripts weren’t great, and you pile on top of that people that aren’t really actors playing those parts, and suddenly your really cool sequence where you’re building up to the monster is laughable.

I spoke to a group of videogame producers at a convention in Vegas a few years ago. They asked, ‘As a movie writer, what is the difference between games and A-list movies?’ I said that it is about the writing. And the acting. You put tens of millions of dollars into sequences that go beyond things you’ve seen in the movies, and then you get cut-rate actors, or you get writers that can’t put together a sentence. Even though a lot of Hollywood movies are crap, they still have a better percentage of quality because they’re paying for top-notch people. I think they’re starting to realize that. I think that that’s starting to make games more expensive, but also more intriguing.

Remember the days where the cutscenes were just [makes a typing motion with his hands] and you just went through them? Well, Metal Gear, even though it’s the most long-winded game in history, those scenes are pretty good. I’m not saying that they don’t go on too long sometimes, because they do, but they’re pretty cool, and they’re really dramatically done, and they hired some really good people. You know, voice actors, apart from myself. There’s some top voice actors: Phil LaMarr, Jennifer Hale, these people are top-of-the-line. People like that can do something with just very simple dialogue. It’s a lot more stirring than a game developer who has just sat down and says ‘look out, there’s zombies!’ [in a mocking voice] or ‘monsters!’ [laughter]

With the roles of voice actors constantly growing in this market, do you foresee a day where American voice actors are treated with celebrity status like they are in Japan?

Not to toot my own horn, but…

The nice thing about being a voice actor is that people don’t really know what you look like.

I think that with you, though, they do.

They’re starting to. I’ve been very lucky. To date, I don’t really get much of a hassle. But if I go to Comic-Con or something and I speak… I’ve been twice, for X-Men and X-Men 2. That’s what I’m there to talk about. And, at the end, there’s a crush of people with Solid Snake material coming for autographs. And all of the X-Men people are just like, ‘Why are they talking to our screenwriter?’ [laughs] They don’t really get how much more intense the fan base is for that, and then, after I do something like that, I can’t walk down the hall at Comic-Con. A trail of hundreds of people follow.

So, I have experienced that. Fortunately, it’s not an everyday thing. In everyday life, I might buy something at a video store and they’ll look at me and say something like ‘are you the David Hayter?’ and I’ll say [in Solid Snake voice], ‘I’m a David Hayter’ [laughs].

Speaking of X-Men, what is your favorite of the movies? And why?

I like X-Men as well, I think it’s fun, but there’s a lot more problems with it that I see looking back, you know, out of us getting our feet wet for the first time.

[Thanks so much to David Hayter for this interview. Destructoid readers, be sure to check out this post for some awesome Solid Snake-themed Dtoid-flavored quotes from Mr. Hayter himself!]