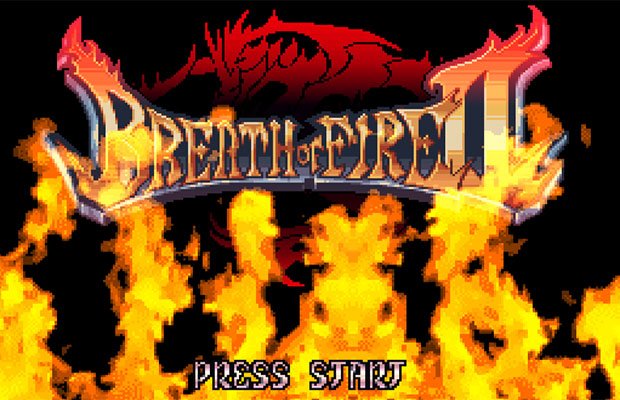 A few weeks ago, a member of the ROMhacking community named Ryusui created an English translation for Capcom’s classic Breath of Fire II. Nuka Cola — a Destructoid community member and one of Ryusui’s beta testers — wrote about the patch with considerable enthusiasm, so I decided to give it a whirl. At the time, it seemed like a good way to kill a few hours while I procrastinated during finals.

I didn’t realize, however, that Ryusui’s fan translation would consume the next couple weeks of my life. It’s remarkably well done, and the game itself is a solid, albeit dated, 16-bit RPG. If you missed Breath of Fire II the first time around, you might as well experience it with a nuanced and contemporary translation in hand.

I’ve always been interested in fan projects–translations, remakes, walkthroughs, wikis, and the like–because I think that devoted, inspired people are intrinsically fascinating. Take Ryusui for example: he spent three years working on this translation just, y’know, because. To know a game backwards and forwards like that is really cool, but it’s not a luxury most of us really have.

But I had some questions for Ryusui. Most importantly, why the hell would you spend three years translating a game that already had perfectly playable English versions on the Super Nintendo, Gameboy Advance, and the Wii Virtual Console?

And that is precisely the first question of my interview with Ryusui, which can be found after the jump. 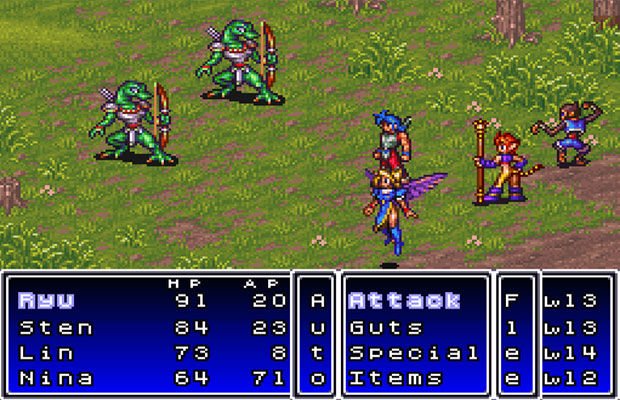 First of all, why would you spend three years working on a game that people already have access to? This isn’t like when Starmen.net localized Mother 3; people can play Breath of Fire II in English on the SNES, GBA, and the Virtual Console. Was the original localization really that bad?

Famously so. My first experience with Breath of Fire II was the GBA version, which uses the SNES version’s translation verbatim. I lost interest sometime after SimaFort (Fort Nageur in the new translation); my opinion was “I could write a better translation than this”.

The old translation is a stilted, mechanical mess. It’s not as bad as Zero Wing – at the very least, it tries to abide by the conventions of English grammar – but imagine running an entire script through Babelfish, if Babelfish could be trusted not to completely mangle every single sentence put through it. That’s BoFII‘s translation in a nutshell: a slavish, artificial-sounding, word-for-word conversion from the Japanese script to English. Contrary to rumor, there are no vast swaths of script missing from the English version–just a few minor things that didn’t get past Nintendo’s censors–but there’s no regard for aesthetics, either.

Tell me a little about what Breath of Fire II means to you, personally. This game must’ve had a compelling effect on you, since it prompted three years of hard work. How did this project come to be?
At first, not really a whole lot. When d4s wrapped up the German version and started shopping around for a new English translator (it appears I was actually only the second attached to the project), I decided it was time to put up or shut up.

It wasn’t until late 2008 that I actually got around to playing the game through from beginning to end (I had playtested it before, but only up to defeating Argus; the work wasn’t finished enough for a full playthrough). Now, I had my fun writing the script, but I think it was during the cutscene where Highland Castle collapses that the game itself decisively won me over: it was no longer just a project I had to see through, it was a game I had only managed to make more epic than before. 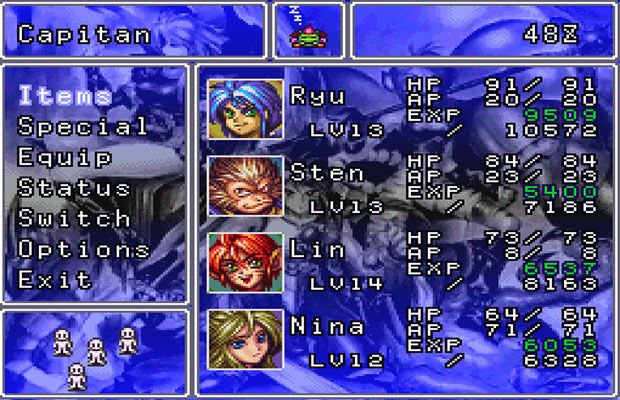 Playing through the first couple hours of your translation, it’s obvious that a lot of care and attention went into this project. What kind of design choices did you have to make? Some of the game seems really melodramatic, but a lot of the dialog is really natural and idiomatic–how did you decide what kind of tone to use for each character or situation?

The only real “design choice” I made was to Westernize the more blatantly Japanese bits (it is a quasi-European fantasy setting, after all). In the original translation, there are a lot of distinctly Japanese-looking names directly romanized from the original script: in some cases, these are a no-brainer as the ending cast list gives some idea as to what they were meant to be, but in others, I had to use a bit more imagination. The headmaster at the magic school, for example, is “Yoji” in the original translation, “Youdi” in the ending cast list and “Jordi” in my version; all three are pronounced identically in Japanese, but the last one has more of a European look to it. (There’s still “Miso Stew” in the game, though, and a few tenant names like Daiye and Yozo were left as they were.)

As for how I wrote the dialogue, I just wrote what seemed natural for each character given the situation, using the original script as an outline. There are some places where I fudged the script a bit so that certain character reactions would seem more natural, though, like the scene where Nero admits his questionable eating habits and Bosch demands to see the pig’s collar (it seemed odd to me that Bosch wouldn’t catch the significance of the collar the first time it came up).

Were there any changes you wanted to make, but couldn’t?

Just about the first thing I asked d4s was if we could have variable-width fonts in the menus and on the battle screen (other than the enemy names, that is). Not enough VRAM, as it turned out.

Seems like changing the names of characters, locations, and items would cause some trouble for the UI — menus, text box sizes, etc. Besides the script, what kinds of other changes had to be made to accommodate?
The number of interfaces that haven’t been moved, resized or otherwise tinkered with could probably be counted on one hand by now. d4s did the lion’s share of the work, though there were a few I discovered needed fixing in the alpha/beta testing phase. I also restored a few UI elements that were originally removed to make room for the expanded names, such as the item stack multiplier in the shop interface (you couldn’t buy stacks of items in the German version) and the AP cost indicator in the battle screen’s magic menu. 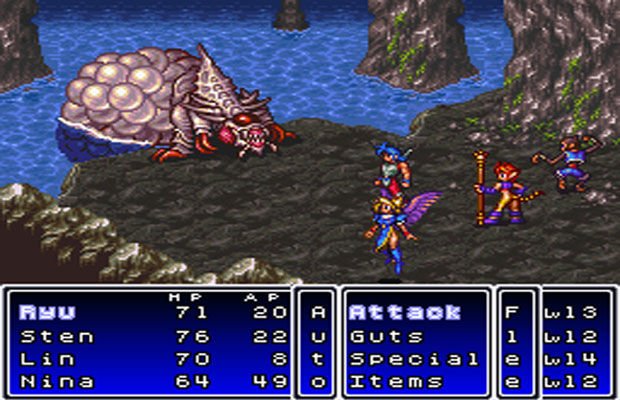 One of your beta testers actually sent this tip in to Destructoid. Can you describe your relationship with the rom hacking community, and the Breath of Fire II community? What kind of contributions did these guys make?

I still think of myself as something of a newcomer, but at least I’ve put my days of being “the guy who won’t shut up about Sylvanian Families” behind me. (Sylvanian Families for GBC was my first successful project, something like Harvest Moon without the farming or Animal Crossing without the backstabbing. It’s not a bad game, but it’s definitely aimed at a younger crowd. I picked it because I thought a Japanese kids’ game would be easy to translate. Wrong.) Breath of Fire II is only my third project, but I have provided help for other projects, such as translating a few troublesome lines in Gideon Zhi’s translation of the original Super Robot Wars, providing a few graphics for KaioShin’s translation of Dragon Quest Monsters: Caravan Heart and writing some ASM hacks for VX’s work on the Japan-only Super Ultra Baseball 2 series.

The project thread on RHDN was where I bounced my ideas off the community at large; it was instrumental at weeding out some of the really stupid ones, like spelling “Ray” as “Reigh” or inventing increasingly baroque euphemisms for Deathevan (before settling on simply “the Dark God”). It was thanks to creaothceann that I was able to fix one annoying graphical glitch from the German version (namely, the fact that the Dragon’s Tear in the menu is displayed behind the borders instead of in front of them), and his VSNES program was absolutely vital for debugging. And of course, there’s my team of beta testers, who did an amazing job of making sure the end product played properly from beginning to end (and inspiring me to fix a couple of things I first thought I couldn’t).

What’s next for you and Watercrown Productions? Another translation? An updated version of Breath of Fire I?

, my next project is Death Note: The Kira Game for Nintendo DS, but I’ve been looking into other projects as well. I have a few on the back burner that I’ve been itching to get back to: King of Bandit Jing, Bistro Recipe (the game that inspired “Fighting Foodons”, believe it or not), and of course there’s the rest of the Sylvanian Families series…but there is one big-name project I’m looking into. I won’t name it yet – not until I’ve gotten some work done – but I think you won’t be disappointed.

Second question: Super Metroid, Persona 4 and the Ace Attorney series. (Ask me later and I might pick something different. It’s just so hard to choose.)

I’d like to thank Ryusui for his hard work and his willingness to answer my questions. Go here to download his translation patch.

You’ll need an emulator and a ROM for Breath of Fire II which, I must remind you, is illegal to have unless you actually own the game. If you download the patch (and you should! It’s really good!) make sure to check out the “Readme” text file — it’ll walk you through everything you need to know.