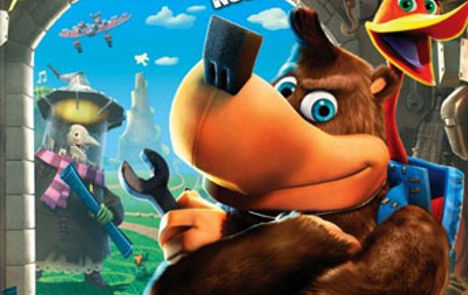 Banjo-Kazooie: Nuts & Bolts caused quite a stir when it was first revealed. For years, fans of the platforming bear and bird duo waited for a true Banjo-Kazooie sequel, and when it was finally announced for the Xbox 360, people simply didn’t know what to make of it.

Nuts & Bolts, as you should be well aware, is going to be centered around the use of vehicles which you build build and use to complete a variety of challenges. Although this was met with cries of outrage at first, BK fans have gotten used to the idea and it’s looking like the game will be a very enjoyable outing when it finally ships in November.

We had the opportunity to catch up with Rare’s Shaun Read, one of Nuts & Bolts‘ main designers. Second only to series creator Gregg Mayles in terms of design work, he was just the man to answer our questions. If you want to see those answers for yourself, then read on, dear friends. Read, read on.

It has been many long years since we last saw Banjo-Kazooie on a home console. What made you decide that now was the time to resurrect them after such a long time in videogame character purgatory?

Read: I don’t think anyone here at Rare ever really thought the bear had gone for good, more like in a period of hibernation. The truth is we didn’t want to make ‘just another’ platformer and not until now has the technology allowed us make a game as new and exciting as we thought the franchise deserved.

Destructoid: When the first details of Nuts & Bolts were released, what did you make of the somewhat cynical reaction from fans who didn’t think the premise was “true” to the spirit of the series? Have you found that the reception is getting warmer the closer you come to release?

Read: It was totally expected and in many ways welcomed. What it meant was that fans were still deeply passionate about the franchise. Our belief in the new gameplay direction was strong enough to know that we’d eventually win over the majority of doubters. And yes, I do believe perceptions of the game have improved as more details have been released. Hopefully by the time the game is out everyone will have forgotten those initial reactions and just enjoy playing the game.

Destructoid: It’s sometimes seems to be a fine line between innovation and tradition, where too much of one or the other can lead to a game being accused of altering and ruining everything, or becoming stale. How hard is it to work on something like Banjo, with the strong fanbase it has, and provide enough fresh content while keeping old school fans happy?

Read: Again, I think it comes down to the confidence we had in the original concept. Nuts & Bolts, beneath all of its next gen loveliness, is still very much a Banjo game.  Its characters and unique style of humor are all as strong as ever.  Yes, we still expect a small percentage of the old-school fans to pine for a traditional Banjo game but hopefully, once they play the game, they’ll totally enjoy the new direction in which we’ve taken the franchise.

Destructoid: In the recently released Viva Piñata: Trouble in Paradise, the Xbox Vision camera was used in order to get special in-game features. Could a similar idea happen in Nuts & Bolts to gain extra parts for one’s vehicular constructions?

Read: We love what the Piñata guys have done with the Vision Camera and yes, it’s a technology that could work well in Nuts & Bolts. The truth is, so many ideas came forth during the development of the game it was unrealistic to get everything in that we would have liked. Maybe it’s something we could look into in the future, so watch this space.

Destructoid: It was announced that the game would include co-op. How is that set to work in the traditionally single-player B-K world? Will it be story-driven, or a separate feature from the main game entirely?

Read: Again, so many ideas, so little time to implement everything you would like. It’s an inescapable fact of game development that sometimes gameplay features have to be dropped. Unfortunately, for several reasons, co-op play was one of these features. That said, the team are extremely pleased with how well the multi-player side of Nuts & Bolts has turned out. We’re confident that players will get great enjoyment from playing both over LIVE and across split screen against friends on their own sofas.

Destructoid: When can we expect to hear more about the Stop n’ Swop feature?

Read: Under strict instruction, IT have wired up all Banjo team keyboards to self destruct if they ever detect when the two ‘S’ words are typed in. Several team members are already “never going to play piano” and I don’t intend to join them.

Destructoid: We now know that the first Banjo-Kazooie is coming to the Xbox Live Marketplace to coincide with Nuts & Bolts. With the well-documented problems revolving around GoldenEye 007‘s once-rumored appearance on Xbox Live, were there any hurdles in making this happen?

Read: Not at all. As we here at Rare have not been involved in the game’s development it was a great surprise to one day have a completed version of B-K appear on our dev kits.  Having tested the first game I can honestly say that it’s totally faithful to the original … minus the occasionally choppy framerate.

Destructoid: How well are you expecting Nuts & Bolts to fare in terms of sales? For all Viva Piñata’s critical acclaim, it doesn’t seem to have fully gelled with the predominantly young male audience of the Xbox 360. Do you expect that the Xbox 360 can become a platform not so dominated by “gritty” shooters like Gears of War, and that Rare titles will be able to stand out more in the future?

Read: It really is something that, as developers, is out of our hands.  Traditionally, the average age of owners drops through a consoles lifetime.  Hopefully this trend will continue and games like Piñata (and hopefully Banjo!) can start getting the sales their critical acclaim merits.

Destructoid: Finally, can you say something that I could controversially take out of context for a sensationalist headline that would totally get me a Digg frontpage?

Read: What, apart from the rumour that one of the Banjo design team has been known to wear women’s underwear? Not really, they’ve kept me in a darkened room now for 2 years, only being allowed to leave to perform necessary bodily functions.  The sum total of gossip I get to read is on web sites such as this one.  Sorry!