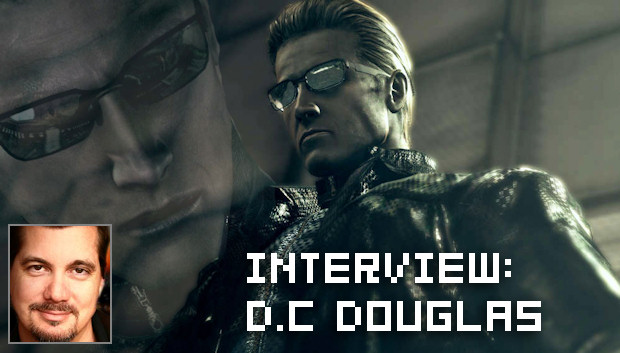 Resident Evil 5 may have polarized gamers as to whether or not it’s a worthy addition to the Resident Evil franchise, but if there’s one thing we can all agree on, it’s this — Albert Wesker is a badass. He may sound like David Bowie and say “Chris” an inordinate amount of times, but he is still one of the coolest men to ever fill an African full of mind-controlling parasites.

A huge part of Wesker’s greatness (and the David Bowie thing) can be attributed to his voice actor, D.C Douglas. Brought on board for Umbrella Chronicles, he replaced fan favorite Richard Waugh as the definitive voice for the character and quickly made the role his own. Waugh was a tough act to follow, but Douglas has become one of RE5‘s highlights with ease.

Destructoid had the good fortune to speak with Douglas about his role, how fans have reacted to his performance, and a number of other topics including the game’s racism controversy and videogame violence. Read on for our full interview with D.C Douglas.

You’re the fourth person to take on the role of Albert Wesker. How far into the series’ history did you dig to research the character and how much did you take from past performances when characterizing the villain?

Douglas: I had no idea how BIG Wesker’s place in VGs was.  However, after UC, I was quickly educated about Wesker by friends who obsessed on the game.  It was through them and the directors I worked with that I got the backstory, etc.  I didn’t have the benefit of creating the voice.  That’s hard because I am confined to what has been done that may not be natural for my voice or sensibilities.  My main thrust, though, was to try and merge what other actors had done with Wesker into my own style and sensibilities.  It’s been an on-going struggle because there are several versions of him.  But the Capcom and Just Cause folks have been awesome, as well as Liam O’Brien – who directed me in RE5.

Destructoid: What influenced the David Bowie-esque quasi-English accent that Wesker slips into during the course of Resident Evil 5, and why is it so awesome?

Douglas: Because I am David Bowie … Sorry, okay, really that was due to my interp of Peter Jessop’s performance, which the producers wanted me to match for UC.  In RE5, we were allowed to back off it.  And, of course, as Wesker “changes” in RE5, the voice does as well.

Destructoid: Resident Evil has a very devoted fanbase, and I know that the series’ female fans can be very … “protective” … of the Wesker character. How has the fanbase treated your representation of Wesker and have you had any disturbing fanfiction sent your way? Would you like me to send some?

Douglas: Don’t ever contact me again …  Actually, I have gotten many nice emails from RE fans.  I have also read some nasty things as well online.  It’s all good, ultimately, in that I got the gig.  It means the right people dug what I was doing.  You can’t please everybody.  If you try, you end up watered-down and boring — in anything.

Destructoid: How much of the game do you get to watch and/or play before actually recording the dialog? How does recording for videogames differ from previous acting gigs?

Douglas: Well, the game is still in development when they record the voices.  Unless it’s revoicing in English.  You just get playback of the actual line or scene you’re doing. And it’s RIGHT BEFORE you record it.

Destructoid: Does taking a key role in a major videogame release compare to TV and film work, or do you think videogames still have quite a way to go in order to be as prestigious as more established mediums?

Douglas: Are you kidding?  I am getting just as much response from fans AND industry folks regarding RE5 as I did when I was a recurring on NBC’s Boston Common in the mid 1990s!  VG has arrived.  Now actors just have to get some residuals for our work like we do with films and TV.

Destructoid: There has been quite a bit of controversy surrounding Resident Evil 5, since many have taken issue with what they view as “racial imagery.” What are you thoughts surrounding the “Resident Evil racism” debate, and was it ever an issue during your time working on the game?

Douglas: Well, I personally can’t work with white people, so I had them leave the studio …  To be honest, I never saw any of the Africa scenes because I only saw green-screen shots Wesker was involved with. As for the game in release … I haven’t played it yet!  I get to next week when I take my copy over to a friend’s house who has a set-up!

Destructoid: What were your thoughts on the script for Resident Evil 5? Did you enjoy the rather ridiculous B-movie quality of the writing, or did you ever feel a bit silly saying “Uroborus” all the time?

Douglas: I enjoyed slightly rolling my R with that one.  It’s genre specific, and therefore delightful!

Destructoid: What’s your take on the “violent videogames” debate? Just recently, a teenager went on a shooting spree in Germany and videogames are being blamed, with a very high likelihood of a full-on “killergame” ban. Do you believe games can spark violence, or that they’re merely a handy scapegoat?

Douglas: If you have “issues” — deep psychological issues, certain things will trigger an “acting out” episode.  In the 60’s they blamed LSD for atrocious acts.  But, looking closer, it was individuals who were already off-balance to begin with.  If I was a CSI fan and watched every week, am I going to want to kill a stripper in Vegas? Just as silly. These a-holes who go on rampages are already sick.  They are just using VGs or rock music or vampire books as a catalyst.

Destructoid: Do you know if you’ll be working on any other Resident Evil games? Do you believe we’ve seen the last of Wesker?

Douglas: I hope Wesker will come back (some how!), but I am in the dark, just like you.  It’s probably doubtful.  There is another UC coming soon and I reprise in that one for some flashback stuff.

Destructoid: Finally, our Destructoid community wanted to know that if you could be a tree, any tree in the world, what tree would you be and why?