I like the guys from Running With Scissors. Far from being the baby-eating, kitten-punching corrupters of children that certain quarters would paint them as, I’ve always found them to be thoroughly funny and intelligent people, passionate but down to Earth, considered but with an anarchic sense of fun, and always willing to throw a sick joke into even the most serious conversation. In short, my kind of people.

After myself and Jim spoke to Postal 3 Product Manager Mike Jaret a while back we kept in touch, and finding that both Destructoid and RWS were going to be at this year’s Leipzig Games Convention, we decided to make the time to meet up. And thus, a tad weary and battered by the onslaught of the GC, myself, Mike, and company CEO Vince Desi found ourselves taking refuge in the sanctuary of the convention center’s cafeteria to take a break from the madness for half an hour, and you can find the resulting conversation after the jump.

It was a fun and worthwhile talk, conducted days after Manhunt 2‘s eventual approval by the ESRB while the game’s UK release remained up in the air, – a situation which sadly still hasn’t changed – during which we took in the Postal games, the joys of comedy violence in the media, the failings of both the ESRB and Take2, over-complicated and patronizing games ratings systems and of course, Harry Potter’s sexual problems. Hit the jump. You know you want to.

Vince: It’s set to come out in the fourth quarter 2008. Everything we’ve released so far has been prototype footage and we just let it out because so many people asked “Can I see it?”. You know, in the old days you never really wanted to show anything this early, but now I take the approach that we’ve still got eighteen months, so I’m not going to worry about it.

Destructoid: Development schedules are so long these days, but people have got so used to having access to things through the internet.

Vince: In the old days if you sent something out early you could die by it, but thankfully now that’s changed. But what’s really important to us is that it’s the premier of Postal on consoles, so we’re very concerned with the overall quality. The good news for us is that we’re not under any financial pressure to have to release it for Christmas next year. Oh course I hope to, but I’ll only do that if it’s really optimized. It’s got to come out strong.

But we’re really excited. It’s got all the things Postal is known for, the crazy weapons, a lot of humour, the mature adult attitude, but also this time we’ve done something very different. This time you’re going to be able to play the game three different ways, which is going to make the game very big and add a lot of replay value, which is what I’m a big fan of. I’m an old-timer in this industry and I go back to the old design philosophy of replay being important. A lot people today believe that games should be more like movies.

Destructoid: Or people design games more for the multiplayer.

Vince: Actually another thing about Postal 3 is that it will ship with multiplayer. And we’re not just talking ten maps, we’re already over twenty. So when you consider the game, I don’t want to say it’ll be 50/50, but it’ll have very strong single player and very strong multiplayer.

We’re fortunate in that there are a lot of Postal mods out there. This Postal community is just… Postal‘s a cult.

Destructoid: If you can capture the fan imagination and build a community like that you’ll just run and run. 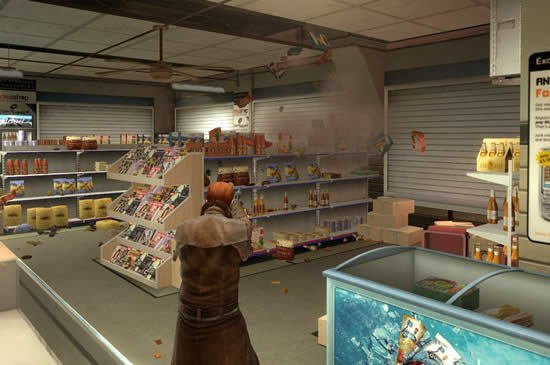 Vince: People will ask me a lot, “Did you plan this?” and the truth of the matter’s no. We just designed a game that we thought would be fun to play and that was funny. Half of what occured afterwards, we had no idea. It was never our intention. The same thing goes with a lot of the negative attention. I was like, “What is everyone so upset about?”. But I think because we were a small independent developer we came in for a lot of scrutiny because we couldn’t defend ourselves as effectively. Not because I’m not willing to, but because nobody wanted to give me a chance.

Destructoid: No-one wants to listen to the little guy.

Vince: And we were easier to pick on.

Destructoid: If you’d been bigger or more established…

Vince: Take2 has gotten away with murder. But the reason they’re suffering now with Manhunt 2, or even prior to that with GTA and the  Hot Coffee thing is that they f*cked up. Hot Coffee came out and they didn’t know how to handle it. It was like a polititian getting caught with his… It was like Bill Clinton saying “I never had sex with that woman”.

Some guy from Rockstar comes out and says “We don’t know anything about Hot Coffee“. And everyone’s like “You are so full of sh*t dude”. It was one of two things. One, you’re stupid or two, you’re lying. And neither’s good. And so really what’s happened now with the whole Manhunt 2 thing I think is that if they hadn’t got themselves into so much trouble with Hot Coffee, they might have had more co-operation.

And the same thing in America with the ESRB. I don’t really blame the ESRB for taking the position they did, because they got f*cked by Take2.

Mike: Well on top of getting f*cked by Take2, the ESRB fuck themselves. It’s a good ratings system overall but it’s just not implemented well.

Destructoid: It’s a similar problem in the UK. It’s just not respected or enforced properly.

Mike: It’s not just that it’s not respected by the public either. They just don’t respect themselves, I don’t believe, because it’s kind of obvious they don’t play through all of the games. They seem to just give you a rating based on what they know about the game, what you tell them about the game, and what they’ve seen. They don’t have a team of people playing through every minute of the game. I mean it’s fairly impractical, but a true ratings board should have it.

Mike: Yeah, they don’t just watch the first ten minutes of a movie. You have a hundred people watching it right through and coming to a consensus. 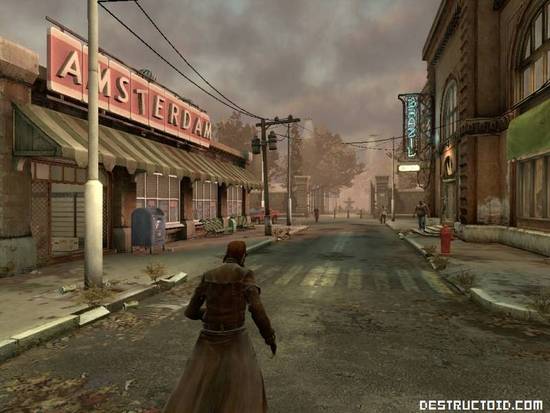 Vince: What I’d really like to see, and I don’t think it’s going to happen, at least in America, is that we need to simplify it. It’s so f*cking… You can walk into a store, pick up a box, and spend a half hour figuring out the bullsh*t. To me it’s like Under Eighteen or Over Eighteen. That’s it. That’s all you need.

Mike: Let’s put a race car on our next box. [Laughter]

Vince: Just simplify it, please. Rather than making it easier, they complicate it. And then they come up with these descriptors, so you could have a game like Postal 2, which is M-rated, and then you have all these words like “Blood”, “Violence”, “Adult content”, “Adult language”, “Drugs”. And Postal 2 was responsible for a new one, “Extreme violence”. [Laughter] I mean you know, why not just make it eighteen-rated and we all live happily ever after?

Destructoid: Just treat human beings with the respect of allowing them to make a decision and judge what’s in front of them. In the UK now we’ve got descriptors on posters for every movie that virtually describe the whole plot in terms of the content descriptions. Harry Potter‘s a 12-rated movie, but you’ll have “Mild to strong fantasy violence and minor peril”. How do you define “minor peril”? Warning: Harry has a bad day and wakes up feeling a bit sh*t?

Mike: “Hermione gives him blue balls. He doesn’t know what to do.” [Laughter]

Destructoid: Right down to kids’ movies everything that’s not a happy scene from start to finish is described in detail. It’s ridiculous.

Vince: We’re not that bad but we’re getting there. And here in Germany…

Destructoid: Half the games here will not be released here.

Mike: I heard at the EA booth, when the Crysis video comes up there’s a big thing on the screen that says “Not allowed to show this trailer at GC”. [Laughter]

Vince: The industry, while we are maturing, we are actually regressing.

Vince: The whole thing that Postal is about is that it’s politically incorrect purposefully. Personally I happen to be a very big animal fan, but that doesn’t mean I don’t like throwing a hammer up a cow’s ass in a videogame.

Destructoid: Some things are just funny.

Vince: That’s exactly what I mean. I’m not advocating, “Okay everybody living out there in the countryside, PICK UP YOUR HAMMERS! Start throwing them up your cows’ asses!” I mean come on! We’re supposed to tell people “Don’t do this”? 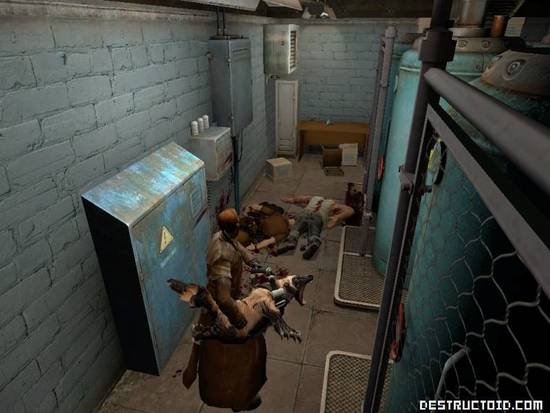 Destructoid: I’m the most pacifistic person in the world, but I grew up on Warner Bros. cartoons, so I appreciate over-exaggerated comedy violence.

Destructoid: You just accept that it’s violence in a completely different context.

Vince: You know when I was a kid I watched a lot of The Three Stooges, Abbot and Costello, all the Loony Tunes, Warner Bros., all of that crazy stuff. Now I didn’t go out and immediately start beating animals. Every now and then a stray cat got lit up, but that was just the neighborhood. [Laughter]

Vince: You never wanted to be a four-legged animal walking around Brooklyn on the fourth of July.

Destructoid: Did you hear that Manhunt 2‘s actually just been passed with an M in the US?

Vince: I read that this morning. They’ve modded it though. I don’t know what they’ve done, but it’s stripped.

Mike: Maybe they just lightened the color a bit so it doesn’t look so gritty. [Laughter]

Vince: I don’t know what they did, but you’ve got to understand that the ESRB in the United States is pretty much owned by the top ten publishers, Take2 included, and you can’t bite the hand that feeds you. So they need to work with them. So I never had any doubt that it would get passed, it just had to go through this process. There’s so much money involved. You know, it’s a Take2 title, it’s Manhunt, I mean it’s not going to do GTA numbers, but…

Destructoid: It’ll going to do bigger numbers than it would have done now.

Vince: Oh yeah, it’ll do better now, and the thing is, those retailers want to make money. Those distributors, they want to make money. This issue you know, it’s the M & M factor. Money and morality. Well I’ve found in my lifetime that money always wins. Just go ask your local priest. [Laughter] It’s all bullsh*t, it’s all crap.