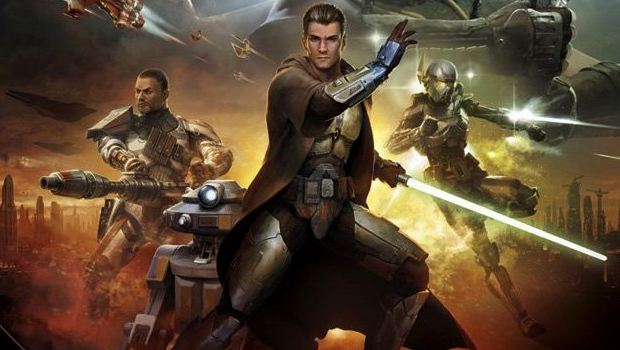 Star Wars: The Old Republic opened its doors for early access this week, and a number of Destructoid editors barged their way in. It’s not our policy to officially review MMOs, due to their expanse and tendency to make huge changes over the course of their existence, but we can certainly share our early impressions of the game.

For those who wish to know, most of the Destructoid folk are playing on the Dark Reaper server, so if you get into the game, come seek us out. I’m the handsome Sith Inquisitor by the name of Vilify, by the by. Give me a call sometime. 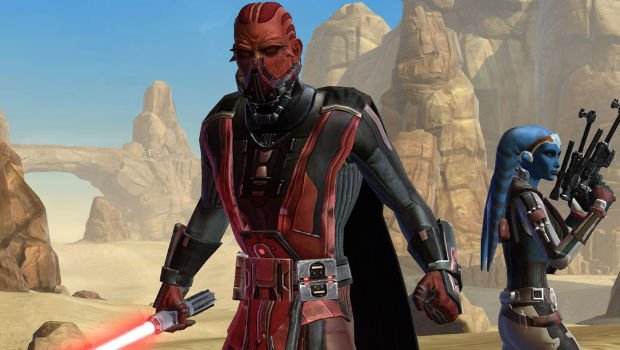 Not just like it, to be honest. I am getting a bit obsessed. Star Wars: The Old Republic has done what no other MMO has succeeded in doing: it made me a fan. As someone who doesn’t generally like MMOs, is usually cynical about BioWare’s work, AND is only a casual admirer of Star Wars at best, this achievement is triply amazing. Somehow, The Old Republic broke through three of my barriers, and now I can’t wait to finish writing this just so I can play some more.

The single-player structure is part of the reason why TOR is so successful. Although it all takes place in a massive open world, each class has a sprawling, lengthy campaign that feels as complete and compelling as any other RPG in BioWare’s library. Player choices are mostly cosmetic, having no lasting impact on the world, but the sense of personality in these choices is rewarding in its own right. There are some fantastic dialog choices too — my Inquisitor is something of a magnificent bastard, spewing lines as badass as any canon Sith could produce.

It’s clear that elements have been lifted liberally from World of Warcraft, but the narrative structure does much to hide any of the usual problems associated with MMOs. The need to grind has been expertly woven into the game’s story so that character progression feels natural rather than forced. The game is great at making players constantly feel rewarded too, with powerful abilities granted at a regular, pleasant pace.

There are some annoyances that need dealing with, though. The fact that the controls try to be as streamlined as possible usually leads to a confused interface that doesn’t know if you’re trying to attack or loot. This is especially egregious with CPU-controlled companion characters, who seem to be surrounded by a huge invisible field that will initiate a dialog if the mouse cursor is anywhere near them.

A lot of TOR‘s success will hinge on post-game content. With such a focus on narrative campaigns, the game sometimes feels less like an MMO and more like a single-player game with other people buzzing around. When a class’ campaign is over, BioWare’s going to need to work extra hard to keep players around. I’ll keep my fingers crossed that player interest can be maintained.

While the obvious problems with MMOs are there for all to see, the way BioWare has made them more accessible and enjoyable is laudable. Star Wars: The Old Republic is a genuinely impressive offering, one I hope to see grow. 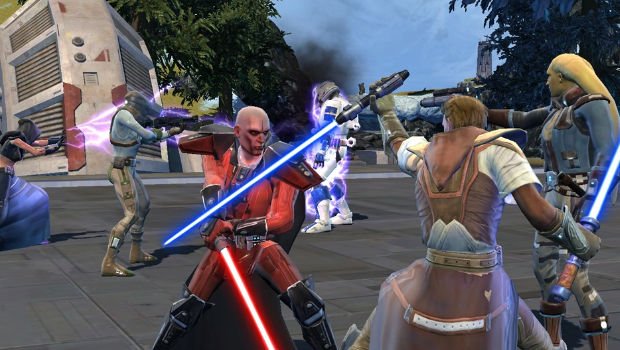 Patrick: I went into SWTOR expecting nothing special. I knew BioWare was going to put its own spin on the genre, but I expected it largely to be a traditional hotkey MMO with a Star Wars paint job. I chose my class (Bounty Hunter), picked from the lackluster customization options, and then it happened. The space backdrop. The music. The text crawl. A wave of happiness washed over me.

I never expected a coat of paint to influence me so much. Prior to the beta weekends I played, I had no intention of buying SWTOR, yet here I am now in early access for the game. Personally, I love how the gun-wielding classes play since you constantly have to monitor your ammo or heat, depending on the specific class. This creates more active battles instead of the monotony of traditional battles. I even thought the animations were pretty, though perhaps I’m in the minority on that one.

Voice acting and dialog trees add so much to an MMO, way more than I thought they would. Half of the time, I didn’t even realize I was doing a “bring me three random drops” quest until I was almost done! I actually cared about the character giving me the quest and there was some real backstory to it, so I was legitimately invested. Obviously, not all of the voice acting is top notch, but it usually suffices. 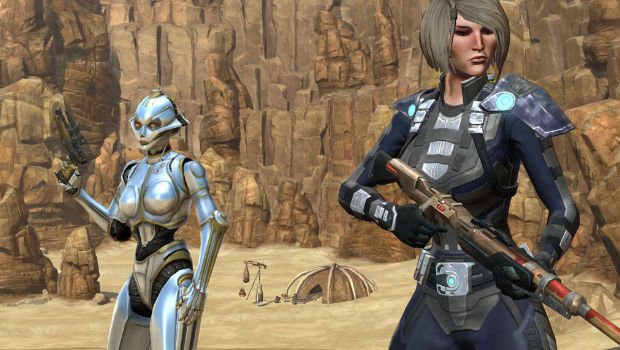 Sophie: I am a huge Star Wars nerd, okay? Let’s just get that right out there. I’m also a big fan of KOTOR, one of the greatest RPGs I’ve ever played, and I’m not just saying that because it runs on a d20 system. So when The Old Republic was so much as announced, I was ecstatic, elated. I was so happy to see BioWare return to this fantastic setting and in a genre I actually find quite enjoyable. I watched from afar as screenshot by screenshot gradually revealed EA and BioWare’s vision, and I was active on the community message boards. Hell, I even got myself an Old Republic-inspired Halloween costume and had a fan artist paint me up as a Sith (it’s now my computer’s background, by the way).

But as a small-town Iowa farm girl, I couldn’t really do much else. I could only follow the forums, enter my name in the beta, and pray. That is, until this past summer when, through a fortunate internship placement, I was able to attend E3. My supervisor at this job told me, as though he were calming a hyperactive child on Christmas, “I don’t want you to do any work today. Just go and have fun.”

I nodded slowly, my pupils wider than a slow loris as I drank it all in.

“I’ll help you out,” he added. “What’s one game you just have to see while you’re here?”

“The Old Republic!” I squealed in delight. Would I finally be able to try my hand at what had only been a dream before? To put it simply, yes. I was given a 15-minute sit-down with a mid-level Sith Assassin, and my God, I was loving every second of it. Groundbreaking it was not, but streamlined and enjoyable it certainly was. I came away that day with a souvenir hat, T-shirt, and smile. I can hold off until it comes out now, I thought.

But Christmas came early for me. I received a beta invite, and so could spend as much time as I liked with the game! I eagerly downloaded the client and strapped myself in, ready for the same excitement and adventure as I had experienced at the Los Angeles Convention Center.

I was, in a word, disappointed. The build was completely and obviously unfinished, with many enemies as nothing but a pink blob of “missing textures.” Many abilities shared animations across classes and factions — the Jedi Knight’s leap was the same as the Sith Warrior’s as were their slashes. Quests were un-completable. My computer just about melted my jeans to my crotch, burning up as it tried to process the visuals which had yet to be optimized.

I realize that it was only a beta and these things are to be expected. That’s why I’m giving you the straight-and-narrow opinion, dear Destructoid. Because anyone can be hyped for a game, and many constantly are, from announcement to release. But that’s not what happened with me. I was a fan-girl who got a handful of her dream, only to find out that it was more like a nightmare. My spirits were pretty much crushed, and I looked to TERA, The Secret World, and Guild Wars 2 as suitable alternatives for my MMO fix.

But as each month went by and BioWare released new builds, I could see the improvements slowly filtering in. The static, lifeless animations of saber combat were replaced with new, flashier moves that made me truly feel like a Jedi. The worlds started to teem with little details. Cutscenes which had faulty camera angles or character model clipping were suddenly crisp and engaging. I’ve watched as this game grew from a dream-and-only-a-dream to an exciting product I can’t wait to install once again.

It won’t revolutionize or change the way we play MMOs, but it is, above all my other concerns, fun. And that’s what a video game should be. 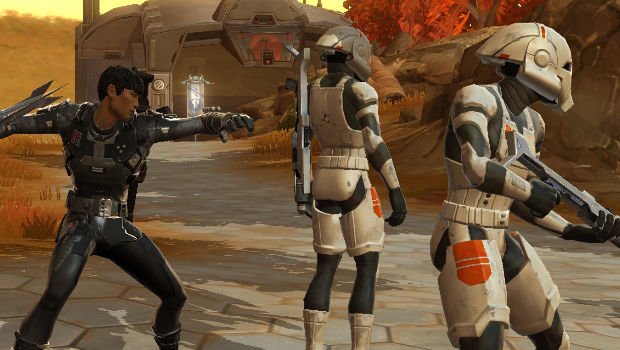 Ryan: I never thought I’d ever say something like this, but Star Wars: The Old Republic has some of the best single-player I’ve ever experienced in a MMORPG. The reason why I’m hooked on this game is probably the same reason why traditional MMO players might be turned away from it: BioWare put a large emphasis on questing and the solo experience.

Up to this point, quests in most MMOs have typically been incidental — the chewy fat leading up to the meaty goodness that is PvP. And while the PvP combat in TOR certainly is fun and engaging, getting from character creation to the battlefield is no longer a grueling task. Even if you’re re-rolling a specific class, you at least have the choice to experience quests in different ways (light or dark side).

It’s good to finally have an MMO that provides a strong solo experience instead of merely leaving it on the back burner. And if multiplayer is your thing, you always have that choice too. Few other MMORPGs can boast that they offer that same variety of choice.

No bullshit, I’m more invested in my character now than I ever have been in any other MMO. The narrative aspect gives leveling and progression more substance, and I feel pretty fuckin’ badass as a level 18 Sith Pureblood Marauder. And I get the feeling that my saga is far, far from over.

Now, if only BioWare would do something about the assholes with misspelled names of Star Wars characters (i.e. Bastilla, Cidius, Malek). Bastila Shan wasn’t even a Sith, you uncreative twat.