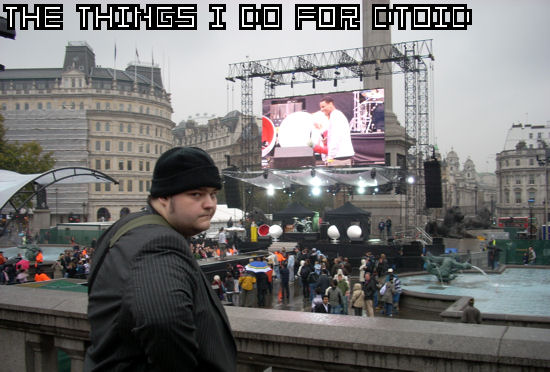 From Wednesday the 24th to Friday the 26th of October, Electronic Arts took over London’s Trafalgar Square as part of the London Games Festival. Essentially one gigantic, rain-soaked videogames commercial, EA’s Be the One event featured celebrity hosts, a plethora of playable games, and a free bags of M&Ms for all.

With the promise of such goodies, and the London Games Festival really not having much else of interest, community member Wardrox and myself took ourselves off to Trafalgar Square completely unannounced last Thursday and expected to be treated as royalty. We did not get treated as such.

Just how far did one fat misanthrope and a northerner with a yellow mohawk get, how successful was the event and more importantly, was The Simpsons Game any good? All these questions and more will be answered with my less-than-dramatic retelling of our adventure available after the jump.

Also, make sure to check out the photographs of the day, and before anybody asks, my monocle got destroyed at the Games Media Awards, which is why I am sans-eyeglass until I get it replaced. Now hit that jump and stop squirming.

After drinking the world’s most expensive coffee, we approached Trafalgar Square to hear the kind of noisome northern squalling that could only emanate from the mouths of former kid’s TV stars Dick & Dom. The whimsical pair were on one of the two giant stages that were connected via a catwalk that was inconveniently cutting Trafalgar Square in half.

Dick & Dom were doing what pretty much everybody would be doing on that stage throughout the day — giving away prizes to people who played videogames while mentioning EA as much as they could. Due to the weather and the lack of promotion for anything to do with the London Games Festival, the turnout was unimpressive at best. We quickly left this place to scale some stairs and line up like peasant folk to get our hands on the important things — the games.

Beyond the balcony, the gaming area was a much more welcome arena, sheltered as it was from the harsh winter rain. Made up of a collection of ‘pods’ with their own theme, there were playable versions of nearly everything EA had coming out in the next few months — Boogie, Smartypants, a selection of Sims games, FIFA, Burnout Paradise and of course, the game I was interested in — The Simpsons Game.

Deciding to grab a little hands-on time with the latest attempt to do The Simpsons justice in a videogame, I took the reigns of one half of a co-op stage while nobody took the other half. Possibly some sort of battle mode, there was precious little to do other than run around eating snacks and beating up various Simpsons characters. The gameplay was simplistic, but it worked, and being able to turn Homer into a big round ball of fat and knock into things was indeed a pleasure.

I was impressed with how The Simpsons Game looked, capturing the look and feel of the TV show with some of the most subtley pleasing cel-shading that I’ve seen. It’s far too early to tell, but it’s quite possible that The Simpsons Game could well be a decent title in a gaming franchise that has not become known for quality. Time will tell on that one.

After spending entirely too much time in line for a goodie bag that contained too much bag and not enough goodie, I’d grown sick of wandering around like an unknown plebian and demanded (or asked politely) to speak to someone in PR, since I’m a Destructoid writer and kind of a big deal. We became huge green balls in a game of human tennis as Wardrox and I bounced from person to person, each one more promising than the next until we ended up in The Trafalgar Hotel, which was fully of important looking people, men in silly costumes and Bullseye legend Jim Bowen.

After some smooth talking to convince EA we were who we said we were (and me egotistically referring to Wardrox as my assistant), we were given what I’d come for — Media Passes which promised no benefit whatsoever, but made us feel big and important, which is the only reason to be in media. This was celebrated with a quick drink in the local pub.

Thus returning, we took many photographs and eagerly awaited the live Rock Band contest. Well, I eagerly awaited it as my promoted assistant had disappeared, abandoning me in the cold and unforgiving streets. Dick & Dom had returned by this point and amazed me with their ability to squeeze out as many Dick jokes as possible — see, because one of them is called Dick so they could get away with it.

I sat there, exhausted and still suffering from the flu, wanting the contest to be over so I could go, and then watched as technical problems delayed the antics. To pass the time, Dick & Dom waved their arses about in front of the cameras and told us it was what we’d come to see. I must admit, they were among the highlights of the day.

The contest was between Stuff Magazine and IGN UK, both teams dressed quite ridiculously. The main problem with this contest was that in order to play any of the games, one had to have one’s back to the audience, thus removing any sense of spectacle save what was caught on camera and broadcast to the big screens. What could have been a visual treat for the now-growing audience was reduced to a large group huddled in a small corner of the stage. Disappointing, to say the least.

So I went home.

Altogether, it was certainly an impressive spectacle for a game company to pull off, and no doubt generated some excitement for Electronic Arts this coming holiday season. While the technical issues of the stage and a lack of enthusiastic audience hurt the event, it was certainly refreshing to see videogaming treated with such flair and style. Had I the time, I’d have liked to have attended all three days, but I took what I could get. Hopefully this is the start of other such large scale events, if the general apathy of the disgusting British public didn’t put anyone off.

Love EA or loathe it, the company certainly made games look like a big deal, which I think is what this festival was trying to do in the first place — the keyword being “trying” there.