Who the f– well, you know the rest

This time, on Drago–I mean, Destructoid Community Interviews, we get a look at Destructoid’s very own Kanye West, FlanxLycanth. Whenever someone needs identifying, you can always count on Flanx to ask the million-dollar question: “Who the fuck is [person X]?”

A longtime community member who’s known for being an avatar that crosses two of America’s greatest pastimes, Kanye West and JoJo’s Bizarre Adventure, his participation in the community goes well past the front page, but now’s your chance to really find out who the fuck FlanxLycanth is.

Strider: So, who the fuck is FlanxLycanth? What brought you to Dtoid? And why did you stay?

FlanxLycanth: Flanxlycanth is the coolest black guy you know. I say second coolest because I don’t wanna get sued for something I can’t prove.

Strider: I remember when your avatar was just Kanye, then one day BOOM, Kanye’s Bizarre Adventure.

FlanxLycanth: JoJo‘s is the shit. I kinda fell off anime but that got me right back into it. I Photoshop Kanye in lots of different ways, that’s one of my best creations.

Strider: What was the thing that brought you to Dtoid’s doorstep like a proverbial baby in a basket?

FlanxLycanth: I think I had always known of Dtoid but I made my account around Feb ’14. That was a month after I got my job in the office. I had a lot of downtime after getting tasks done and needed something to read and take part in. Dtoid had the only comment section I didn’t need a gas mask to participate in. Y’all are cool as fuck.

FlanxLycanth: I still have my account on IGN. I think it has a lot more downvotes than any other of my accounts. Anywhere.

Strider: Dtoid seems to be universally agreed on to have a good comment section. Even members who have left had stories of how totalitarian other sites can be.

FlanxLycanth: Yeah, I’d like to think I’ve made some good friends in that hole.

Strider: I have a feeling we’ll get to JoJo, so we’ll set that aside for later.

Strider: Tell the good folks at home: what is your favorite game? Console? Imaginary color that only deep sea shrimp can perceive?

FlanxLycanth: Holy shit, you mentioning the shrimp is weird. My friend brought that up while we were waiting for Deadpool to start in the cinema and it mindfucked us for the rest of the night.

FlanxLycanth: Favourite game though… that’s a hard question. I usually don’t do favorites.

FlanxLycanth: Though when I think of it the first games that come to mind are Final Fantasy 1 and Persona 3. I love both and can replay both endlessly.

Strider: How can we even begin to imagine what other colors there are? Aquagenta? Crimsellow?

Strider: Is XII the one with Vaan and the sky pirates?

FlanxLycanth: Please man, don’t do it. It doesn’t make sense. Colors between the ones we know? It’s too much it makes me feel sick. Like, what if my yellow isn’t everyone else’s yellow? Purple is the best colour for a reason, what if other see it as something else?! 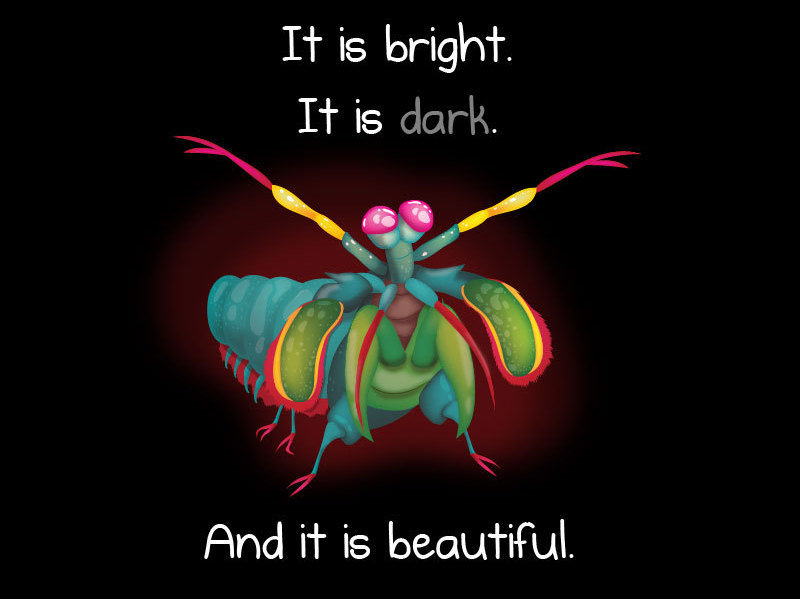 [Picture from The Oatmeal]

FlanxLycanth: And yes, XII is the one with the Sky Pirates and the kid with the inverted abdominals.

Strider: If could hang out with any Dtoider, and I mean anyone on Destructoid, who would it be and what?

FlanxLycanth: Damn that’s hard. Likely to be quite a few….

FlanxLycanth: Staff-wise, Steven. I love that dude, I don’t think he’s written anything which I haven’t read while nodding in agreement. And his red text game is on point.

FlanxLycanth: Oh and I promised CelicaCrazed we’d get taco sometime. Shout out to him.

Strider: Gotta cook. So many random ideas that just force you to get creative before it goes bad.

Strider: Like, why do I have so many hamburger patties? Why?

FlanxLycanth: A hungry man can use stale bread in an incredible amount of ways. Add hamburger patties and you’ve got enough to open a restaurant.

FlanxLycanth: OH AND MIKE MARTIN OWES ME PIZZA SO PUT HIM ON THE LIST (ily bae)

Strider: Brass tacks, how old is “who the fuck is …”? Did you start that? Did you inherit it? My earliest memory of it is, well, with me.

FlanxLycanth: Btw, who the fuck is Strider?

Strider: THERE IT ISSSSSSSSS!

FlanxLycanth: I know everyone on the site. Kanye sees all. Apart from Strider. Who the fuck is Strider?

FlanxLycanth: I don’t need to ask anyone else, it’s obvious.

FlanxLycanth: I think he wrote a blog some time.

FlanxLycanth: And he mentioned me in it.

FlanxLycanth: And so I asked who the fuck he was.

FlanxLycanth: And I never got an answer…

FlanxLycanth: Sounds like a cool guy. I’d buy him a pizza.

Strider: I know it’s a hella long series. Is it okay to just watch Diamond Crusaders though? The arc with Jotaru and the peak with the steamroller and a… dog with a stand I think?

FlanxLycanth: I can’t judge. I came across JoJo after playing the Dreamcast game at my cousin’s house a few years back. Knew nothing about it before then but it was crazy as hell so I had to research it.

Strider: I definitely know it’s bigger than the memes let on.

Strider: But there are two previous arcs before the big one everyone knows.

FlanxLycanth: Well that was all I knew too because the game focused on characters from the third, which is a shame because those other two are badass.

Strider: Would you say JoJo is your favorite or most influential anime?

FlanxLycanth: Hmm while I love it, it’d probably be Dragonball. That’s what got me into it all. In the Caribbean, they used to play Dragonball Z in Japanese. Nobody knew what was going on but it was hype as hell. Then when I came to the UK, I found the manga of Dragonball and that was what sucked me into it all…

Strider: My first anime was Trigun, but the one that hypes me no matter what is Gurren Lagann.

Strider: I followed the series vicariously on 4chan. Just reading reactions and crap.

Strider: The background to the 10th anniversary card is the anti-spiral galaxy panorama actually.

FlanxLycanth: Gurren Lagann is amazing. I loved that too. Giga Drill Breaker was so hype to me I used to shout it all the time. I used to have chouginga gurren lagann as my desktop wallpaper. My girlfriend loves it too; let’s hope she doesn’t fade away if we ever get married.

Strider: Not like you’re destroying the source of her existence at least.

Strider: We can start winding down I think. If you could have an official title on Destructoid, what would it be?

FlanxLycanth: What do you mean, I’m already President of the People. Do I have to link you the c-blog again. Y’all voted me in.

FlanxLycanth: YOU GOT YOUR FISH, NOW I’M YOUR LEADER.

Strider: What is this Watergate scandal? RECALL.

FlanxLycanth: No but for real, I love you guys. Thanks for not being asses and thanks for letting me touch your asses.

Strider: Thanks for the interview! It must be past midnight at any rate.

FlanxLycanth: Yes, it’s late. Time to watch Twitch until the sun comes up.