It starts next week

Back in 2013, Archie Comics released a rather groundbreaking crossover — “Sonic & Mega Man: Worlds Collide.” It was a joint effort between Capcom and Sega properties, and brought the two iconic heroes together to battle their nemeses who banded together to take them down. Talking about Mega Man often has people feeling blue, but when it comes to Archie, it’s hard not to not crack a smile while reading through that arc.

Now it’s back this year with “Worlds Unite,” an even bigger event that will…well..unite classic Mega Man with X, and a whole bunch of other Capcom and Sega characters. To bring some order to this chaos, I had a chance to talk with Archie writer Ian Flynn about the project.

Chris Carter: Why did you ultimately decide to create another Mega Man and Sonic crossover? Was there unfinished business with “Worlds Collide?”

Ian Flynn: “Worlds Collide” was one of those once-in-a-lifetime opportunities, so we poured all our love into it. When we got the opportunity to revisit the idea in “Worlds Unite,” it was great to revisit the premise, but it begged the question: how do we top the last go-around? The answer, of course, was to go bigger, bolder, and with even more crossovers!

C: Speaking of “Worlds Collide,” how would you rate the sales of those issues in comparison to the regular Mega Man line?

I: They were huge. People really responded well to “Worlds Collide.” Hopefully folks will be just as enthused for “Worlds Unite.”

C: Did the decision to split them up between different comic lines work well?

I: It did! It brought some extra attention to Sonic Universe and Mega Man. We made sure to make it very clear and easy to tell which issue readers needed to pick up next as they jumped from title to title.

C: As you may know, there’s been a polarizing reception to Sonic Boom, particularly when it comes to the games. How would you sell the inclusion of that subfranchise into the “Worlds Unite” universe?

I: The games established the characters and world in that media, the comics and cartoons expanded upon that and have been very well received. The Boom characters help balance the franchise representation — two types of Mega Man, two types of Sonic — while also bringing some much-needed levity to an otherwise very dramatic adventure.

C: As a follow-up, what went into choosing the additional Capcom universes to represent in “Worlds Unite?” There’s massive amount of rich universes to pick from, so it must have been difficult.

I: It was really hard to choose, because I wanted to play with all the toys! But we narrowed it down to those we thought would best mesh with Sonic and Mega Man. Resident Evil wouldn’t exactly fit the tone of brightly colored animal-people and robots, right? Capcom was very receptive and supportive. 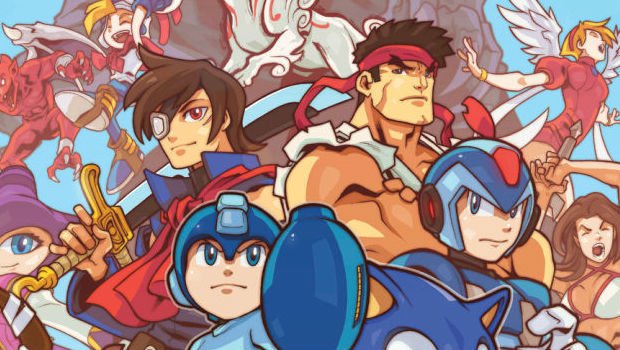 C: I’m really jazzed that the Red Arremer is making an appearance. What’s your favorite non-Mega Man/Sonic character that will be joining the fray?

I: It’s no secret that I’m a huge Skies of Arcadia fanboy, so having Vyse and the crew show up makes me happy. And I’ve always wanted to play around in the Street Fighter universe, and I had a lot of fun with those characters.

C: Can you talk a bit about when the Mega Man X storyline will take place in regards to the game series?

I: Everything kicks off some time after Mega Man X7. Axl is a member of the Maverick Hunters, and the Next-Generation Reploids have yet to appear.

C: Finally, I asked this years back, but I’ll ask it again! What are the chances of getting a standalone Mega Man X comic series?

I: Unfortunately, a Mega Man X series is just not in the cards right now.

C: Thanks for your time!

The 12-part “Worlds Unite” storyline will begin on May 27 at comic shops across the country (and digitally), and will span roughly three months across issues of Sonic the Hedgehog, Sonic Boom, Sonic Universe, and Mega Man. Feel free to peruse the gallery above for a ton of amazing artwork, preview pages, and cover art, some of which has never been seen before.