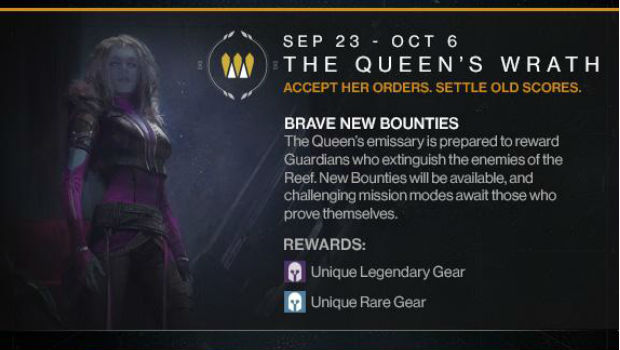 Bungie is currently running a special event in Destiny that basically consists of extra bounties and an extra faction to interact with. It’ll run from September 23rd through October 6th, and will allow you to earn rare weapons, class items, shaders, and emblems.

To start the quests, just got to the regular bounty vendor in the Tower — he’ll now provide you with Queen bounties. To locate the Queen’s emissary, it’s behind the bounty robot in the area that was previously inaccessible. If you do a bounty, you’ll get a chance to do a random story mission (existing ones, not new ones) for two fixed legendary pieces.

It’s a pretty middling event, basically. You’re just taking bounty missions for one of the many factions, and the rewards aren’t even that great. Bungie can do better than this. While they’re at it, how about not giving us constant bounties for the Salvage gametype when the event isn’t even live?