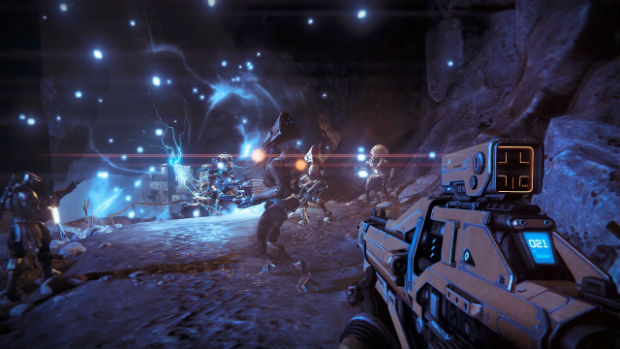 No back touch required

Destiny is out tomorrow, but the servers are live today for people who got their copy early or are reviewing the game. I’ve had a chance to play quite a bit already (more on that tomorrow), but I wanted to touch on one thing in particular today — Remote Play.

Often times Remote Play is a second thought, and requires you to make some sacrifices in control quality, but Bungie did a great job adapting Destiny for the Vita. Everything is relatively the same except for of course the absence of two buttons (L1 and R1) on the Vita and the ability to click the analog sticks (L3 and R3). The former is solved with very intuitive tap system — a tap on the left side chucks a grenade, and a tap on the right allows for a melee attack. The sprint button is the down d-pad direction, right next to the left analog movement stick.

Tapping the right side of the screen constantly feels natural, and although the left side can be a bit jarring at first, grenades are on a respawn timer and aren’t used as often. Tapping both sides of the screen uses your L1+R1 super move, which again, is only used sparingly. I really wish the Vita just had four shoulder buttons and dynamic analog sticks, but this is the next best thing.

I’ve played on the Vita for a few hours, and found it to be pretty comfortable for all occasions. Strikes can be a bit much because of the smaller screen real estate, so I switched over to the TV for those, but everything else from story missions to exploration hubs are completely playable. With some practice, I suspect Strikes and Raids will be too.

Check back tomorrow for some thoughts on the retail build of Destiny. I can say that I’m not blown away so far, but I’m enjoying myself as I approach level 10.