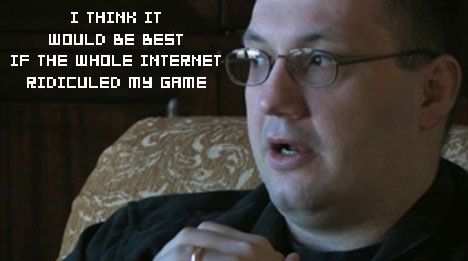 While Silicon Knights president Denis Dyack has to be commended for his bravery in speaking directly to gamers in this matter, I have to admit I flinched when I read the whole story: it seems he has challenged NeoGAF forum users to stand up for or against the upcoming title “Too Human“. According to Next-Gen.Biz:

“The deal is: Prior to the release of Too Human, posters say whether they are “for” or “against” the game, judging from previews and footage they’ve seen. If the game comes out and gamers find that it’s a steaming pile of hot garbage, then Dyack will where [sic] a tag under his forum name that says “Owned by GAF.”

If Too Human is well-received, all those who voted “against” will be tagged “Owned by Too Human.”

Denis, Denis, Denis. What in the name of God would make you do something like this, on the INTERNET of all places, where people flame each other mercilessly because they have nothing better to do (until their moms yell at them to clean up their rooms)?

Since I haven’t played the game personally, I can’t really comment on which stance I would go with (if I participated, which I don’t plan to). Some of the early word on the game has been mixed, however, so I suppose we’ll have to wait and see. One thing’s for sure, Dyack is certainly standing behind the title — let’s see what the oh-so-forgiving Internet makes of that come release time.