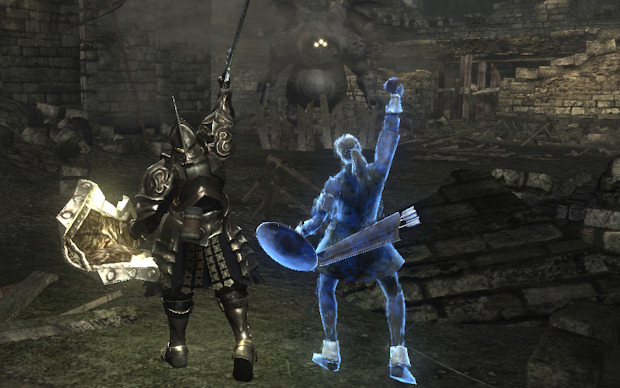 For quite some time I didn’t know what, exactly, I wanted to say about From Software’s RPG Demon’s Souls, but I knew I wanted to say something. That’s one of the most amazing things about this game. It makes you talk about it. It makes you think about it. You’ll be at work, trying to concentrate on business, but in your mind you’re just plotting out new strategies and approaches to the game’s many and varied obstacles.

Demon’s Souls is a bleak game, set in a dead world. It’s a game about loneliness and desolation, madness and loss. Yet never in a videogame have I ever felt such comradery, let alone in a game as alienating as this one. It’s incredibly curious to note that nearly all RPGs are lonely games for lonely people, yet along comes perhaps the most isolating and forsaking RPG of them all and I don’t feel lonely at all when playing it.

I now know what I want to say about Demon’s Souls, a videogame that may not act like a multiplayer game, yet has more multiplayer spirit than any round of Halo could even imagine possessing. Read on to find out how Demon’s Souls delivers its ultimate message, and how it manages to be the ultimate multiplayer experience.

You should all know by now that Demon’s Souls is a hard game. Much of the difficulty is more grinding repetition and trial-and-error than actual challenge, but there’s no denying that some of the game’s bosses require real strategy and dexterity to defeat. This game is one of the most hardcore experiences released in years, cut from the same cloth as Mega Man and Contra. A real old school game that reminds us just how easy we’ve had it for the past two generations.

Usually these are games I have no interest in. I don’t like to feel punished for trying to enjoy a videogame, and I don’t like games that force me to replay vast tracts of old ground each time I day. Demon’s Souls, however, has a certain magic to it, some brilliant magnetism that keeps drawing one back into its dark and devastated world. Part of it is the fact that the methodical combat is intensely satisfying and brutal. Part of it is the fact that Demon’s Souls’ universe is incredible and fascinating. Most of all, however, I believe it’s the fact that Demon’s Souls constantly reminds you that you’re not just one guy going up against this cruel, spiteful game. You’re one guy of many, and you’re all in this together.

Demon’s Souls has plenty of monstrous baddies to conquer, but the true villain of the piece is the game itself. Demon’s Souls is your enemy. It wants to be played on its own terms, and its terms are favorable to itself and nobody else. However, you do have things that the game does not — moral support, community spirit and the knowledge that there are hundreds of people out there, just like you, struggling against the same great opponent. This isn’t just a game, it’s a full out assault, and you are one of many proud soldiers.

From Software added several wonderful in-game features to remind the player that they are not the only one suffering. When playing online, you will see ghostly spirits running around, attacking invisible foes, and doing things that you have either done, or are yet to do. These are other players, warring against their own version of Demon’s Souls in real-time. As you struggle against a particularly nasty boss, you will see these spirits, reflections of other players, who are fighting that very same boss at the very same time as you. Your sympathies are with them and the sympathies of other players are with you.

The ghostly apparitions of other players could be taken as a metaphor if you want to get pretentious. It’s a message from the game that others are with you “in spirit,” that every hardship you face is being faced by countless peers right at that moment. Many is the time I have passed a ghost, and watched it go about its business for as long as it remains in my world, pondering what adventures it’s faced and where it’s headed next. The specters of other gamers serve as an inspiration, encouraging you by letting you know that there’s a world full of Demon’s Souls players out there, all striving to the same ends as you.

Driving home the idea of sympathy and comradery are the bloodstains. When a player dies, they leave a pool of blood behind that contains a recording of their final actions. Visible in the worlds of other players, the stains can be activated and they’ll replay these last acts, giving off a clue as to how they died. While there is an obvious tactical advantage to this, giving players an idea of where traps and sneak attacks may spring from, the stains also reinforce the concept of shared suffering and instill the feeling of empathy that keeps players invested in the Demon’s Souls experience.

The game lets you know that, no matter how many times you die, you’re not to feel like something is wrong with you. It’s not a lack of skill that killed you as much as a lack of preparation. You weren’t ready for what the game threw at you and, judging by the fact that you’re surrounded by representations of your fellow players’ deaths, you’re not the only one who keeps getting slaughtered. It’s positive reinforcement through negative feedback. Not a single portion of the game is without a puddle of somewhere, from the first world to the last, and even in the Nexus, where some poor sod fell off a high ledge or got punched to death by Blacksmith Boldwin because he felt like killing some NPCs.

Then, of course, we have the messages. Demon’s Souls has a very wide selection of pre-written messages that players can select and then leave on the ground throughout the course of their adventure. These messages will then show up in other peoples’ games, and they are predominantly used as warnings, letting others know of upcoming traps, ambushes, or useful items. Malevolent players might also attempt to lure gamers into danger or guide them off cliffs.

Interestingly, I have very rarely come across notes designed to trick me. I am sure more exist, and I’m certain players have been fooled by other people, but the majority of messages have been put there in good spirit. Most Demon’s Souls players truly want to help each other out, and I’ve even had my life saved a few times with a handy “Behind You” message, helping me avoid an arrow ballista or a sneaky assassin.

Players can rate messages that they find useful, and whenever a message is rated, the person who left it is rewarded with full HP regeneration. There are even messages that say, “I’m in trouble — please rate this message,” allowing players to essentially heal others who are in dire straits. I have very rarely come across one of these messages that lack at least a few ratings, and this tells me that the community spirit of Demon’s Souls is a very healthy one indeed. For the most part, this is a game that unites people — and they can’t even talk to each other properly!

This sense of community continues outside of the game as well. Demon’s Souls is a game that often requires the counsel of others. There are certain things in this RPG that you’d never know without being told. For example, if you face the Penetrator demon without having fulfilled other objectives, you will most likely get eviscerated. However, how will you know that without being told? In most games, this would be considered a complete failure of game design. In Demon’s Souls, however, it’s all part of the experience. Learning the game’s many secrets and then sharing that knowledge with others seems to be at the very heart of the game.

In Demon’s Souls, there’s no shame in asking for advice and getting told where to go next. It’s a game in which you must survive any way you can, whether that’s flicking through a guide or asking someone where to find some weapon upgrade material. Anecdotes and the passing of wisdom are what keeps people in the game, plugging away at the many cruel enemies and vicious traps. If you get two Demon’s Souls players together in the same room, their conversation could last for hours as they compare notes, discuss battle strategies and recount many, many horror stories.

Demon’s Souls does include some more traditional multiplayer elements, namely PvP and limited co-op. However, these “real” multiplayer options seem almost totally unwarranted in comparison to all the amazing things the game does elsewhere with its online servers. While certainly welcome (many players rely on co-op to deal with tough bosses), it’s ironic that these “real” multiplayer elements manage to lack the same sense of community that the single-player mode does.

Demon’s Souls is, predominantly, a single-player game. It’s true, certainly, that games such as Halo or Killzone have far superior multiplayer modes, because that’s what they’re designed for. However, this is less about gameplay and more about capturing what it means to play with hundreds of people from around the world, connected by little more than a concept. To me, the Halos and Killzones of the world certainly have the gameplay part down perfectly, but the community? Not so much. The sense of “us vs. them” that Demon’s Souls encourages is inspiring and truly brilliant, and provides a multiplayer experience that feels so much more alive and engaging than your average frag-fest or action game with a forced co-op mode.

That’s why Demon’s Souls is the ultimate multiplayer experience, and something I don’t think will be topped for quite some time.