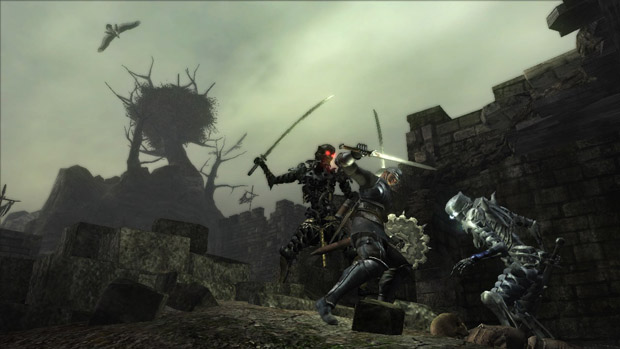 Mmm, Demon’s Souls. The upcoming PS3-exclusive action role-playing hardcore dungeon crawling hotness is coming our way on October 6th, thanks to Atlus. One of the coolest aspects of this game is the online capabilities, which permits both cooperative and competitive (PvP) gameplay. We’ve been dying to know more about this. Thankfully, Destructoid had the privilege of checking out some of the finer details of both modes of online play in a recent online meeting with Atlus.

While your typical dungeon crawler has you exploring, fighting, and leveling up on your own, Demon’s Souls changes it up with a different type of online connectivity. Better said, the online features are there to support and enhance the single player experience. For instance, if someone dies in their game, they leave a bloodstain in their place of death for all other online-connected players to see. Should you stumble across said stain, you can actually view that player’s death animation. This could serve as a sort of warning system for you for upcoming challenges.

A built-in messaging system lets you leave helpful tips for other players. Let’s say there’s a difficult enemy right around the corner: you can leave a tip saying so, and others that pass by can read it and rate it for helpfulness. If they up-vote your message, you’ll receive hitpoints. It pays to be helpful.

But it’s not all single-player. There’s cooperative and PvP action to be had here, too. Both are a bit different from what you’re probably expecting, though.

In Demon’s Souls, when you die, you’ll lose your amassed experience points, but you’ll continue to exist in spirit form. This spirit version of your character can walk around and fight, but it’ll be disadvantaged at only half of its original life bar. The game becomes even more difficult. Trust us, you’ll want to work to get your body back. 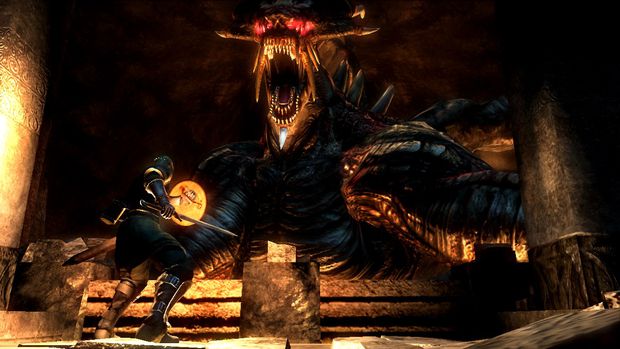 One way you can get your body back is to help another player kill a boss. Provide cooperative assistance and succeed, and you’ll get your body back. You’ll actually appear in another player’s current quest and stage, and you’ll fight alongside them. The benefit to you, of course, is that you’ll get your body and belongings back. But it also benefits the other player, as they can receive assistance in a stage that might be too difficult at their current level. It’s like good karma, and it nets you some extra experience points in the end. We watched on as Atlus employees took on a boss. At their current level, the boss looked to be a bit much for either one of the two players to take on solo. But together, they took it down easily. Another boss, a massive (and beautifully detailed) flying beast, was way too much for Atlus’ Aram Jabbari to take on himself. He could have used co-op assistance. He didn’t have it, and he died.

To get your PvP on, you’ll also have to had died in-game. In spirit form, you can invade another player’s game and kill the player inside. If you win this fight, you’ll get your body back. If you lose, you’ll lose a stat point on your best stat. Isn’t that a kick in the balls? Speaking of ball kicks, you could get a nasty one if you aren’t careful while invading others’ games: other players can have cooperative characters at their side, and you might find that it can be two against one. Even three against one is possible.

What’s really cool is how balanced Demon’s Souls’ online aspects are. Let’s say that you just invaded a game for some PvP action and lost. You can’t just barge back in and challenge again. There are checks and balances in place to block this kind of spamming. There are also level controls that help prevent weak characters from being attacked by stronger ones. It looks like they’ve worked the numbers to keep the fight fair, and we appreciate that.

We can’t wait to give this all a spin. Luckily, we’re just a few days from getting our hands on our own copy to test out these online features. It seems that the gaming press will have their own little server set up for testing. I’m looking to invade — watch out, fellow game bloggers. We’ll let you know how it goes.