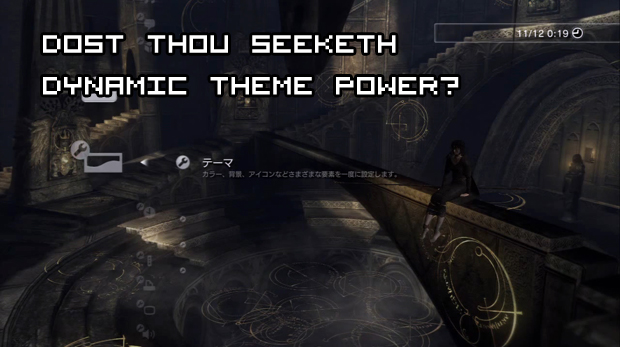 Demon’s Souls is a lonely game. Even though its multiplayer features are geared towards letting players know that their suffering is shared, a Demon’s Souls player is alone in Boletaria.

From Software and Sony have chosen to remind players of this fact, releasing a Demon’s Souls dynamic theme onto the Japanese PSN store. Since sensible PS3 owners have likely forgotten all about them, dynamic themes are basically animated 3D themes for the XMB. Most include custom sound sets, XMB icons, and alternating, active wallpapers. Most also cost money, and make your PS3 look like a big fat game ad.

However, the Demon’s Souls theme looks quite different, and to me feels beautifully understated. Based on the Nexus hub area, the only signs of life in the theme are flickering torches, the animated floor design, and the Maiden in Black who hangs out on the stairs, eyes still occluded by wax. Waiting for the player to respawn after dying horribly for the umpteenth time, she remains ready to convert souls into stat points as always.

Hm. With her in mind, perhaps a Demon’s Souls player isn’t that alone after all. The theme costs 200 Yen, and I can’t buy it because the Japanese PSN doesn’t accept foreign credit cards (bastards!). I hereby call upon Atlus and Sony to bring this gem to English-speakers immediately.

Check below to see a video of the theme in er…action. Any Demon’s Souls fanboys want it?