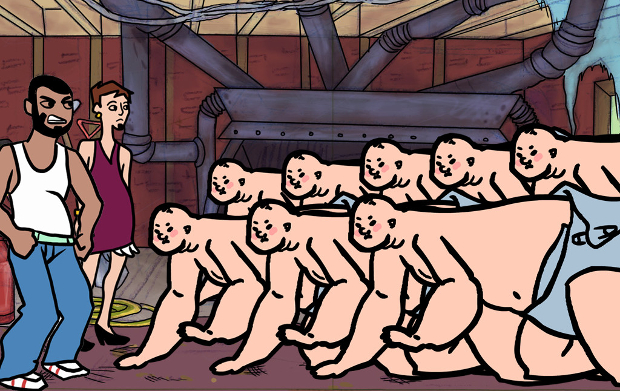 Eight days ago on Sup Holmes (now on iTunes) we were lucky enough to snag Mr. Michael Frauenhofer, creator of Demon Chic. I can say with confidence that there is no one else in the game development scene today quite like him. His first game, Demon Chic, was created in part because he was considering going graduate school, and part of him thought it was a bad idea. His instincts pointed him elsewhere, though the exact directions wasn’t clear. His mother has a background in programming educational software, so the two decided to team up in avoiding the beaten path and trying their hand at game development.

So what did Michael do? He started work on a turn-based RPG about a man named Gary, his boyfriend Ashok, and Ashok’s brother Devraj. The game has largely hand-drawn graphics, uses a word search-style input system, and takes place almost exclusively inside of a house. In the story, Gary has just returned from a “drag party” and has decided to keep the dress on for a while. Ashok is confident and commanding in his bisexuality. Devraj is unsure of his worth as a human being. All three are hallucinating. They are occasionally accompanied by a laugh track.

That’s all before it gets weird.

Demon Chic has been compared to The Rocky Horror Picture Show, and it’s a fair comparison, but I might put it closer to The Doom Generation, though that’s not quite right either. You’ll have to check it out for yourself to understand it. It’s currently on iPad exclusive, though a PC port is on the way. Their next title is about a series of lose-lose situations where things only get more depressing and awful. It’s a rhythm-action game with shades of DDR.

In case it wasn’t already clear, I could talk about Michael all day, but I’m running out of room. If you want to know more about the man’s influences, his goals in game design, and the kind of guts it takes to team up with your mom on making a game about hallucinating boyfriends, then check out the episode for yourself. It’s dynamite