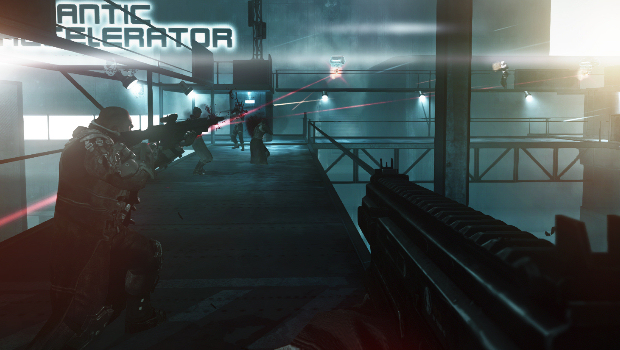 Boy, that Syndicate sure is a first-person shooter!

That is my initial thought after giving Syndicate‘s co-op demo a spin. When I say that, I don’t mean to imply I’m one of those folk who hate a game just because it’s bears the name of an older game in a different genre. I say that because, right now, there’s nothing else to say about it.

That really is all Syndicate‘s demo tells you. You have three loadouts to choose from, with bog-standard weaponry including shotguns, assault rifles and sniper rifles. You can heal and revive your friends, and from there you just … shoot. You shoot stuff in very grey environments until there’s nothing left to shoot, then you move on to the next grey area and shoot more stuff.

The action is fairly typical of the genre. It feels weighty, but rather uninspired. There’s a shallow scoring system to provide a hint of competition between players, but there’s really nothing you’ve not seen before. You just trudge forward and shoot at enemies as they wander erratically around the map, occasionally waiting in a checkpoint room to resupply, before trudging forward and shooting some more.

Some players have since been saying they enjoy the tactical element of the game, but I’m not seeing it yet. So far the only “tactical” element is breaching — one player breaches a target to weaken it, while the others provide support. This contextual command is also used for healing and reviving players. It’s a cute little add-on, but it’s hardly “tactical.”

This is, of course, merely one co-op level, and I’m informed by those who have played more levels that it’s one of the weakest. I sincerely hope there’s more to it than this, because the sample gameplay isn’t exciting. In fact, it reminds me very much of last year’s mediocre Codemasters offering, Bodycount. If the demo is indicative of the overall experience, then Syndicate is looking very much like just another forgettable first-person shooter.

I sincerely hope the demo isn’t indicative of the overall experience, and that somebody in marketing just made a very poor choice of level.