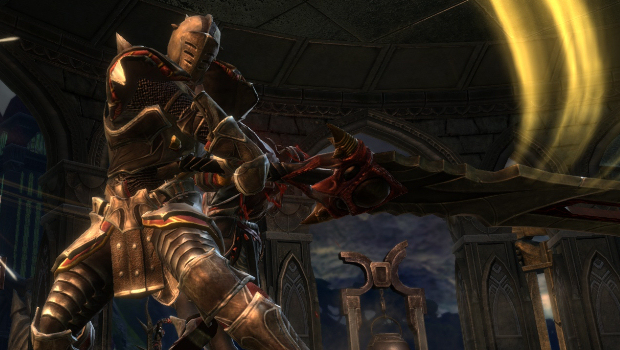 I’ve heard mixed things about Kingdoms of Amalur: Reckoning. Some say it’s great, others feel a little disappointed. After spending time with the demo on Xbox Live, I’m not prepared to judge one way or another — after all, it’s a huge RPG that needs more than an hour. Still, I can say this — I’ve got a good feeling about it.

At its core, Reckoning is very much a typical open world, hack n’ slash RPG. However, it’s looking set to be a lovely one. Combat is straightforward, but tight and satisfying. Amalur is, itself, a rather beautiful environment — very brightly colored, with a unique blend of “realistic” and cartoon-like visuals.

What really intrigues me about the game, however, is the way in which it’s added flexibility to a rather rigid, established set of concepts. At its core, there are three basic character types — your mundane fighter, mage or rogue. However, these character archetypes can be mixed and matched using “Fate” cards that confer special class bonuses and abilities. For example, you could be a straightforward mage or rogue, or you could combine the two to become a stealthy warlock. Or you could mix rogue skills with the fighter’s melee abilities to create a lightning-fast bruiser.

Switching up magic, melee and ranged attacks in combat is fluid and simple, and so far I have a hard time deciding what type of combat I like best. I am excited by the prospect of every character type, to say the least.

What Amalur seems to be doing is taking old fashioned ideas and giving them a fresh coat of paint. It’s no great revolution, but it is a very promising way of injecting new life into familiar concepts. I’ll need to spend more time with the game, which is out next month, but if it lives up to the demo’s promise, this is definitely a brand new IP to keep a close eye on in 2012.

Imagine Fable, but better and not full of totally unrealistic promises. That’s the vibe I’m getting so far.