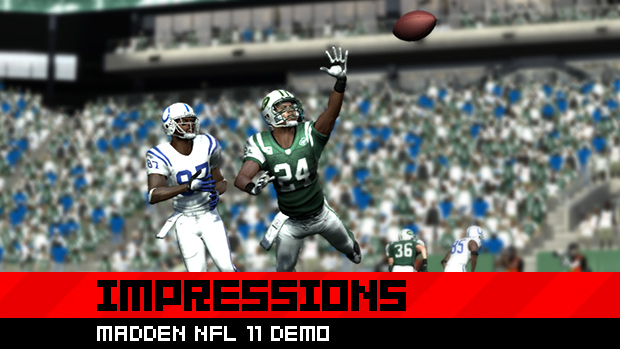 Madden NFL 11, this year’s iteration of the perennial best-selling football franchise, is due out on August 10th. For once, its demo offers a meaty chunk of game: full five-minute quarters, commentary, all settings and sliders, and the ability to test out new features such as GameFlow and Gameplanning.

The demo will be available on Xbox Live and the PlayStation Network next Tuesday, July 27, but EA was kind enough to give me an early code for the PS3 version, and I’ve spent the past few days playing around with it. Hit the jump to see what I liked (a lot) and what I didn’t (very little), and then check out eight screenshots from the demo in the gallery below. 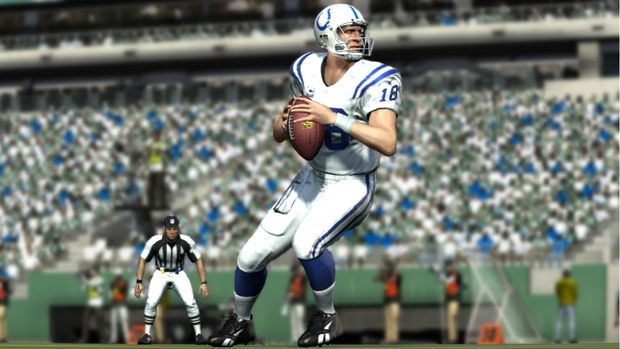 The first thing that jumped out at me in the demo was the audio, which was spectacular. I can’t overstate how great Gus Johnson is as the new play-by-play announcer, and he’s even better with analyst Cris Collinsworth in the booth alongside him. Particularly impressive in the demo was the breadth and specificity of their comments about the demo’s teams, the Jets and Colts; if they’ve recorded this much audio for each of the other 30 teams as well, then we’ll have to deal with much less repetition.

Improved commentary is only part of the amped-up audio presentation; the stadium sounds in the demo made me feel like I was actually at a football game. The fans chanted “J-E-T-S! Jets, Jets, Jets!”; the speakers blasted “Kernkraft 400”; hell, I even heard the Jeopardy! theme during a replay challenge! And when I scored as the Jets to take the lead in the 4th quarter, man, did the home crowd get loud. Unfortunately, occasional minor audio hitches — like a crowd that was inexplicably silent until kickoff — put a damper on the stellar sound, but presumably, those issues will be ironed out in the full game. 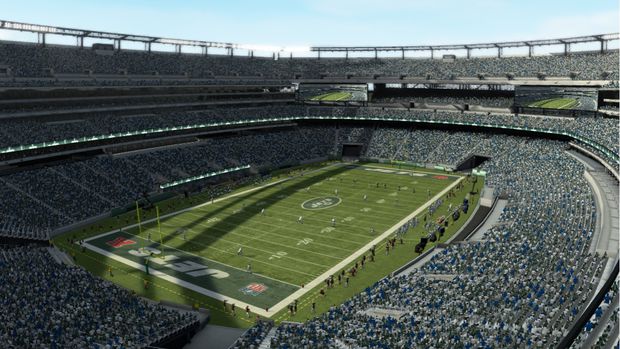 Equally notable are the subtle visual upgrades. The large video boards at the New Meadowlands Stadium are lit differently than the game “world,” thanks to high dynamic range lighting considerations, so they appear as they would on a TV broadcast and really stand out. And in the postgame highlights segment, shots of the stadium show a thinning crowd as fans head for the exits. I also like the newly added cutscenes, like the one that shows a suited-up Peyton Manning stepping off the team bus.

From the main menu of the demo, you can watch one of three tutorial videos to introduce you to some of Madden 11’s new features, or you can hop straight into Gameplanning and set up a gameplan from the Jets’ or Colts’ playbooks. If you do, you’ll automatically unlock an Achievement/Trophy in the full game. There’s also another demo-specific item available: a “Jets Stadium” card for Madden Ultimate Team. To unlock the card, spam your Xbox Live or PlayStation Network friends with invitations to try out the demo. (They’ll understand… right?) Strangely, you can’t access settings and sliders from the main menu; you’ll have to pause a game and go to the in-game menu in order to change them. But they’re all there to mess around with once you do that. 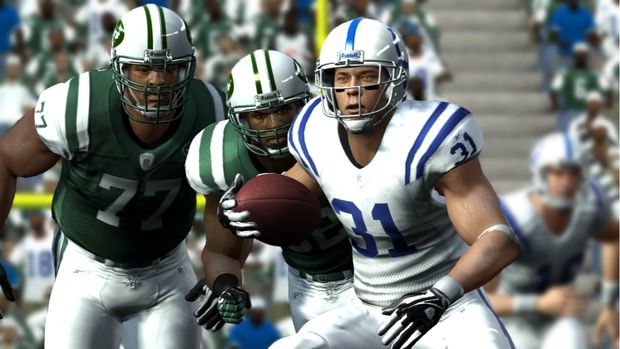 Most importantly, the Jets and Colts feel completely different — and that’s due in large part to this year’s gameplay upgrades. Getting anything going on the ground with Joseph Addai is damn near impossible, thanks to the Jets’ stingy defense, while Shonn Greene’s agility is a great showcase for the new dual-stick controls. I had no problem using GameFlow for most of my playcalling. Just as you’d expect, the Colts will pass a lot on first down and only run to spice things up, whereas the Jets try to run it down your throat. (For specifics on GameFlow, Gameplanning, and more, check out my Madden NFL 11 preview from April.)

Since the demo is representative of the full game, you’ll also see rampant product placement — both visual and aural. You’ll see a large red-check-mark-on-black logo on the game summary, and Gus Johnson will also exclaim that the summary is “presented by Verizon.” And remember, with Old Spice, you can smell like the NFL! Even so, the game itself seems great; I’m excited to get my hands on the whole thing, which will be out in two and a half weeks. Let us know what you think of the demo when it comes out on Tuesday!