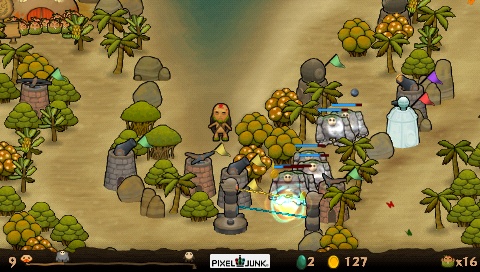 It makes me happy that PixelJunk has been such a big part of Sony’s big pre-E3 push. Not only did we get a chance to look at the new PSN title, but I’ve got a whole mess of images for the PSP release PixelJunk Monsters Deluxe. Okay, okay, it’s only half a dozen, but get excited anyway!

Since I’ve mentioned E3, with everything that’s come to light over the last twenty-four hours (and with more to come, I assure you), I’m absolutely terrified of E3 this year. I mean, if this is what we’re getting a month in advance, what will be dropped on us at the show? It’s entirely likely that I may die there. But, hey, my loss is your gain, right? I’m sure someone will get it on film or something.

Go have a peek at the screenshots with the awareness that this is a port of an awesome game which is awesome.