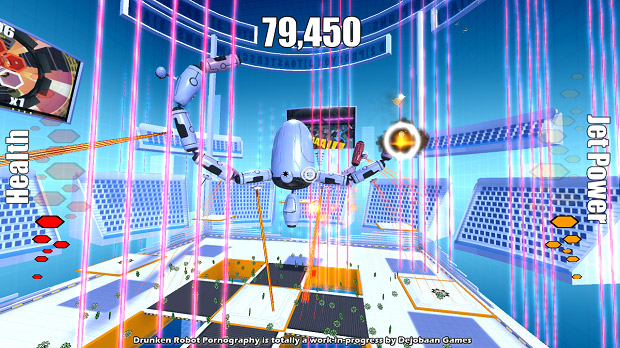 It was a busy PAX East week for Dejobaan Games; not only did they release Monster Loves You, co-developed with Radial Games, but they also released Drunken Robot Pornography and the spiritual successor to AaaaaAAaaaAAAaaAAAAaAAAAA!!!… A Reckless Disregard For Gravity too. The latter two are on Steam where gamers can buy the alpha builds of each title and submit feedback to have a say in the final game.

First up Drunken Robot Pornography which amply demostrates that Dejobaan haven’t lost their knack for catchy names. The concept is equally as crazy; a robot bartender called Tim (which is a perfectly sensible name for a bartender) was given sentience so that we could better understand his patrons’ needs. Overloaded with emotion, Tim burned the bar down to the ground and left with some of the bar’s robot exotic dancers. Now he has to face off against giant robots that are invading earth. So it’s been an off week to say the least.

The gameplay of Drunken Robot Pornography is a hybrid between a bullet hell shmup and an old-school arena FPS like Quake 3. Tim will find himself fighting off giant robots called Titans that are in the center of a multiplatform level. Tim is equipped with a basic Gatling gun and a jetpack making him really maneuverable and capable of firing a crazy amount of bullets whilst navigating the level. You need that level of movement because the amount of missiles, lasers, and drones coming out of one of the titans means you’re always going to need to be on the move.

Whilst it’s initially overwhelming to see pink columns of laser beams heading for you, just like in a shmup, there are patterns to the attacks and learning these is key. For instance, the laser columns won’t pass through the ledges, so hiding underneath one is a great way to avoid fire when taking pot shots at a Titan. Of course, a shmup and an FPS are nothing without power-ups and there were plenty to pick from on my playthrough. Triple shot, missiles, and the all-powerful Neutron Bomb were useful in dispatching Titans, as well as drones that were taking pot shots around the outskirts of the level. 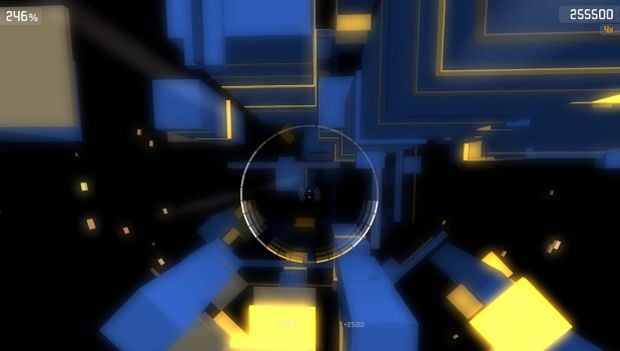 Drunken Robot Pornography is available on Steam’s new Early Access service for $9.99 and Dejobaan technical lead Elliot Borenstein said that he hoped players would use the Steam Workshop compatibility to make their own Titans and levels that they can then share with friends. Whilst there is no firm release date for the game, Elliot did confirm that Dejobaan are looking to have the game released in 2013, in around six months’ time.

Also on Steam’s Early Access is 1.. 2… 3… KICK IT! (Drop That Beat Like An Ugly Baby), which sadly I was too late to play (those Dejobaan guys had to get to GDC). DTBLAUB is similar to AaAaAa… in that it’s an first-person base jumping game but now the levels are generated from your music library, in a similar fashion to games like Beat Hazard or Audiosurf. The proof of the pudding with a game like this is loading a variety of music types in and seeing what comes out. I’m fond of loading in some Iron & Wine and Scott Walker tracks, followed by 20-minute Mogwai and Jesu songs. Y’know, for a laugh?

It’ll be interesting to see how adaptable the engine in DTBLAUB is when different types of music are put in and that’s what the alpha version is for. Players will be able to customize their own levels with tweaks and mutators and give that feedback to Dejobaan in order to develop the game further. I think that Drunken Robot Pornography and DTBLAUB are two really good, open-ended games that can really benefit from that open development cycle, bringing the needs of the gamers and the developers closer together.