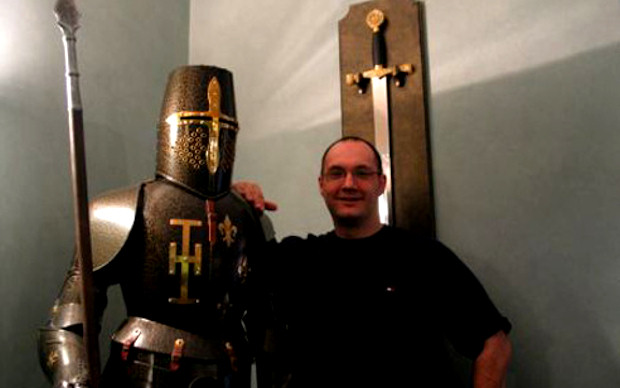 [Defense Force is an article series that roots for the underdog, plays Devil’s Advocate and otherwise defends the indefensible. If something’s hated, and we deem that hatred unjust, you can guarantee the Defense Force will mobilize.]

How many times have you said that Aaron Greenberg should shut his mouth? Or that Peter Molyneux talks too much? Have you ever suggested that maybe Denis Dyack should spend more time developing his games and less time flapping his gums? If you have, it’s quite understandable: These people trash talk, overhype, and generally chat up a storm, and many gamers get tired of it.

However, I can’t help but feel that the gaming community would be a less interesting place without these industry loudmouths, sparking their controversies and giving us all something to be equally loud about. While the words of a Greenberg or a Dyack are not essential, they certainly have a purpose.

Defense Force mobilize! Join me as I stand up for the trash talkers and the chatterboxes of the games industry, even though they’ve got mouths big enough to do plenty of defending themselves.

I’ve never understood why people get so upset by what an industry executive says. What they do is another matter entirely, since that affects the business, but what they say rarely has any impact on us whatsoever. So why do we get riled up and bent out of shape because a Microsoft man said something bad about a Sony product, and vice versa? Some people take what is said personally, when you can be sure that the executives slinging all this mud aren’t emotionally invested at all. I’m fairly certain Jack Tretton’s never shaken his fist and screamed “KHAAAAAAAAN” because of something Peter Molyneux said.

These people know that what they say generates hits. It gets people talking and it keeps them focused on their products. Even the people telling Greenberg and friends to shut their mouths is doing exactly what the publishers want. They’re paying attention and getting more emotionally involved than anybody within the industry actually is. The more you get upset by an industry talker, the more you play into his hands.

I tend to be more amused by what an executive says than upset by it. Don’t get me wrong, sometimes they do say something infuriating, like Reggie Fils-Aime displaying his condescending attitude toward Europeans, or when Sony says something so utterly stupid it could affect consumer confidence in the PS3. Most of the time, however, it’s harmless patter from older men in suits who think they’re chatting smack on a basketball court somewhere in the rough part of town.

That’s my main reason for defending the big talkers of the games industry. They’re fun. When Aaron Greenberg says something insulting about the PS3 or Peter Molyneux makes one of his crazy, hype-laden promises, it sparks debate, prompts discussing or just plain makes people laugh. The playground antics of grown businessmen certainly gets a chuckle from me, and it definitely causes the gamer community to talk. Nobody’s been hurt, and everybody’s had something to say. It’s win/win.

As far as I’m concerned, this industry needs more loose cannons and people who talk way too much. Denis Dyack may have made a horrible game in Too Human, but his endless self-promotion and accusations made for an entertaining ride, far more entertaining than the game itself turned out to be. Who could forget him challenging NeoGAF to an ownage competition? Or how about that time he claimed that people complaining about lengthy, repetitive cutscenes in Too Human meant that they actually loved the game?

How about Luc Bernard, the man whose tantrum following our own review of Eternity’s Child was so inflammatory it got the whole industry talking? Luc is a guy who speaks his mind, even if what he says is crazy. He’s a man who developed a DS game about the Holocaust. He’s a guy who quite the game industry, only to come back a few weeks later. Then there’s Peter Molyneux, who can’t stop talking about how brilliant and revolutionary his games are, even though we all know he’s talking horseshit. You just never know what he’ll say next, and how God-like he will make his games sound. He’s an excited guy, who hypes himself up for his own games, and it makes for some really outstanding stories.

If people like these kept their mouths shut, I dare say the game industry would be a much more boring place. We’d certainly have far less to talk about. Those who are telling such men to shut their mouths are basically stating that they want a more dull and quiet community, and I don’t think any of us really wants that, do we?

It should also be noted that, in many cases, these people are only talking because somebody asked them a question. It’s not like Kaz Hirai sits alone in a room, spouting off nonsense unprompted until a blogger just so happens to walk past and hear him through the locked door. These people are talking because people want them to talk. Questions are asked of these people with the sole intention of encouraging an inflammatory comment. Of course, it’s up to the industry member to choose whether or not he’s inflammatory, but the driving issue here is that he’s only answering questions. These people don’t “shut up” because people keep asking them to talk.

And talk they should. The Greenbergs, Trettons and Bernards of the world are welcome to speak up as much as they want, and whether they say something stupid, incredulous or even moderately insightful, you can guarantee that somebody, somewhere, wants to listen.