[Spoilers for this past season of The Walking Dead.]

In terms of his moral development, Carl Grimes was pretty far along the day that his life ended. According to Kohlberg, the social contract stage is way above the punishment avoidance stage when it comes to psychological sophistication and maturity.

In short, if doing something for someone else requires more of your humanity than purer survival instincts do. While his father, Rick, was working hard on plan to keep himself alive, Carl was out in the wood’s helping a stranger, and that’s when he got bit.

At first I thought this was an unlikely turn of events. After all, Carl had grown up in the zombie apocalypse. He was smart and experienced, to the point of being practically grizzled. After all he’s been through, what are the chances that a small zombie ambush would take him out?

If my experience with Death Road to Canada is any indication, the answer is “very good”. Most of my deaths in the game came a long after I had become stronger, wiser, but most of all, over-confident. Familiarity breeds comfort, and comfort can inspire unnecessary risks. In other words, when you think your life is in danger, you work hard to stay safe, greatly increasing your chances of survival. When you are a 18-year-old kid, totally sure of self, you’re a lot more likely to feel invincible, and that feeling may get you killed.

But who wouldn’t feel invincible with Mjonir – Thor’s legendary magic hammer – flying through the air at your command, tearing through hordes of undead cannibals like a hot knife through butter?

That’s exactly what was happening in my last game of Death Road to Canada. I had turned on the mode that makes special characters more likely to spawn, so I had already met spot-on “parody” versions Link, Mega Man, Octodad, even Rick Grimes himself, on my trip to the Great White North. Then, all of a sudden, I met a literal Valkyrie, armed with Thor’s famous weapon, who was ready to party. I let her join my group and took control of her immediately. It looked certain that we’d be survivors now, as previously terrifying swarms of zombies could now be cleared in a matter of seconds.

It was with this cocky attitude in mind that our team decided to take on a last minute rescue mission. The plan was to run into a burning building to save a life. It turned out that the life in question belonged to a large poodle, holding a human leg bone in its mouth. What the hell, right? We’ve got the power of a Norse God in our hands. What could go wrong?

Then, about five minutes into our run, my hammer got stuck behind a wall and ten flaming zombies fell through the collapsing ceiling. Seconds later, I was eaten alive. Now I know how Carl Grimes feels. 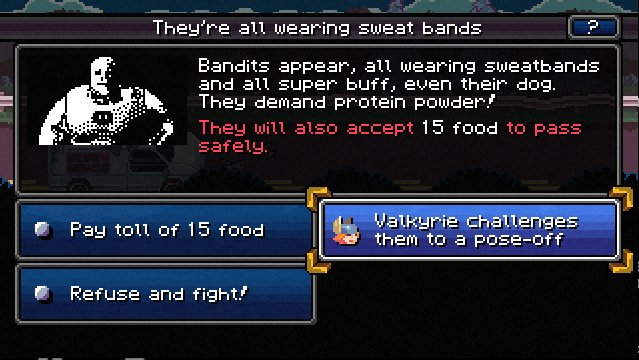 Looking back on it now, another thing my heroic death had in common with Carl’s was need for excitement. Like The Walking Dead, Death Road to Canada spaces its action set pieces between bits of expositional dialogue. These Oregon Trail-style text adventure moments are often pretty funny, but if you happen to be hit with too many in a row, you’ll really start to itch for a fight. I think holding Carl back made him overly eager to get into the thick of it as well. If you take life too slow, then you may not be ready for it when the pace picks up again.

Speaking of slow-down, the problems that have been causing the game to experiences those kinds of performance issues on Switch seem to have been fixed. That said, I wouldn’t complain if the game had an optional slow-motion setting. Maybe that could help to keep me alive for longer.

When I first played Death Road to Canada, I thought it was a neat little 2D, multiplayer, Dead Rising-like, that was way too time-consuming for me to ever actually beat. That was before I got the game on the Switch (20% off until 5/23). Having it on a portable with built-in co-op capacity changed everything. No only have I finally made it to Canada, but its also helped me to make sense of a television death that I had previously scoffed at.