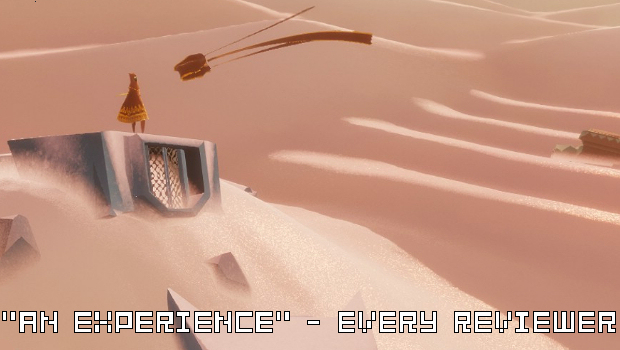 There’s a grave problem facing videogame reviewers today. No, it’s not the rampant backlash over numerical scores. No, it’s not corruption and publisher pressure. It’s something far more deadly to our entire industry … we’ve run out of things to call videogames.

One of the biggest challenges when writing a review is keeping the words interesting without falling into repetition. You can only write a game’s title or refer to it as “the game” so many times before people catch on. Hence, I know I’ll typically toss in another word to spice things up, and that word is almost always “experience.”

The reviews for Journey, however, have exposed a simple truth — we’re all in on the same racket and we’re in desperate need of something else.

“Journey isn’t a game — it’s an experience,” wrote Eurogamer Sweden, valiantly trying to make the word mean something but failing to realize it has no impact anymore. After all, Digital Spy used the word twice in a single paragraph.

XGN agrees, saying, “You can hardly call Journey a game, it’s more of an experience,” while Videogamer calls it an “expertly choreographed experience,” and Joystiq believes it to be an “unequivocally transcendental experience.” Then there’s this jerk from Destructoid who said Journey was “a flowing, seamless, influential, and utterly exhilarating experience.”

Anyway, I think I use the word “experience” at least once per review, and there are doubtless many other reviewers who do the same. Of course, that’s fine until a game like Journey comes along, and you want the word “experience” to mean something less banal — an impossibility due to how overused it’s been.

Unfortunately, there are few words that can replace it. Once you’ve written the game’s name enough times in a review, and once you’ve referred to it as “the game” and “this title,” there’s not much else to reach for. Even cracking open a thesaurus fails to bring a more perfect word.

Perhaps, rather than stop using the word in reviews, we can simply come up with a better, more special word for titles like Journey. That way, when we want to look clever by claiming it’s more than a videogame, we’ll not look silly by referring to it with a word we’ve used to describe a hundred other videogames. Maybe we can say something like:

Or really, any suitably pompous, quasi-invented term from a Square Enix game. I am certainly down for calling Journey a “birth by sleep.”

That’s my proposition, anyway. If we’re going to use “experience” to the point of mundanity, we need to make something new up for Journey. I hope my fellow reviewers take me seriously; otherwise, I’ll tell the nice readers how many times you’ve referred to a combat system as “visceral.”