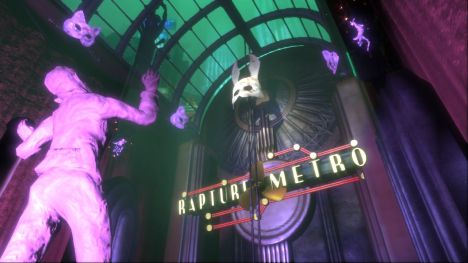 While it was more or less a definite about BioShock‘s PS3 appearance, without a formal press release from 2K, all we could go on were the details we could steal like tiny breadcrumbs: it seemed to be a direct port, all the little fixes would be taken care of, Andrew Ryan’s pants are removable in a mini-game (but why not make that last one TRUE, 2K!).

You can read the full press release after the jump, which unfortunately sheds almost no new light, merely mentioning the port would have “new features and content”. There are also two new screens from the PS3 version, which you can see large versions of in the gallery.

I think the big point of discussion here is fairly obvious: Would you buy it again if it has a significant amount of new content? I have to admit, I’m considering it, but that’s more because of my love of the game than any promise of new features — I just want to experience it all over again. I can do that for free though, as my 360 copy is sitting on the other side of the room. What do you think?

New York, NY – May 28, 2008 – 2K Games, a publishing label of Take-Two Interactive Software, Inc. (NASDAQ: TTWO), announced today that BioShock®, the “genetically enhanced” story-driven action game, is in development for the PLAYSTATION®3 computer entertainment system at 2K Marin. The PLAYSTATION 3 system title will be released in October 2008 with new features and content that heighten the award-winning experience.

BioShock for the Xbox 360® video game and entertainment system from Microsoft and Games for Windows® was released in 2007 and received numerous Game of the Year honors from prestigious organizations including Associated Press, the British Academy of Film and Television Arts (BAFTA), Game Informer, Spike TV’s VGAs and Paste Magazine. BioShock’s extension to the PLAYSTATION 3 system will bring exciting new content to this amazing title and reach many new players, while giving the title the opportunity to once again be named Game of the Year.

“Since BioShock for Xbox 360 and Games for Windows won countless 2007 Game of the Year awards, we are excited to see the impact of this stellar title for the PLAYSTATION 3 system when it debuts this fall,” said Christoph Hartmann, president of 2K. “Over the coming months we look forward to revealing the new features and content that will make this a must-have game for its new audience, as well as for those who enjoyed it on the other platforms.”

BioShock is a narrative-driven action experience that allows players to do the impossible as they journey through an amazing, immersive and terrifying world. Caught between powerful forces and hunted down by genetically mutated citizens, the player will come to grips with the mysterious and fascinating world of Rapture, a distinct Art Deco underwater utopia gone mad. BioShock not only challenges the players’ capacity to adapt and survive, but brings to question their values and commitment to the inhabitants of Rapture. With smart and adaptive AI, no encounter ever plays out the same, while numerous customization options provide gamers with an experience that adapts to their playing style.

As one of the highest-rated titles of 2007, BioShock was unanimously praised by the editorial industry’s top critics:

“While delivering a level of intrigue you rarely see in games, its most captivating element is its gameplay – which I can easily say delivers the most rewarding and adrenaline-filled experience I have ever had with an FPS.” – Game Informer Magazine, 10 out of 10, Game of the Year

“There’s ample flexibility in the game’s linear storyline that makes a second run through Rapture’s unique brand of madness an exciting prospect.” – Associated Press, 4 stars out of 4

“Why settle for watching the hero in a film have a thrilling adventure when you can all but live a narrative this masterfully woven.” – Paste Magazine, Game of the Year

“BioShock stands as a monolithic example of the convergence of entertaining gameplay and an irresistibly sinister, engrossing storyline that encompasses a host of multifaceted characters. This is an essential gaming experience.” – IGN.com, 9.7 out of 10, Editor’s Choice Award

“More so than any other game in recent memory, BioShock is dripping with atmosphere and intrigue, and it’s one of those rare titles where story, dialogue and character development are just as important as the action sequences.” – USA Today, 9 stars out of 10

BioShock for the PLAYSTATION 3 system will be available in October 2008 and is not yet rated by the ESRB. For more information on BioShock, visit www.bioshockgame.com.