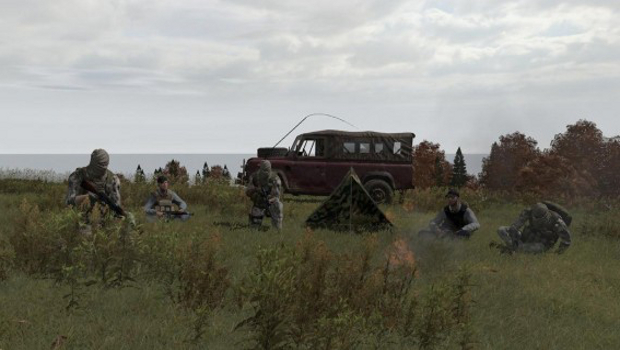 With the incredibly popular DayZ mod for Arma II spawning a standalone game soon to be in development, creator Dean “Rocket” Hall spoke with PC Gamer about what players can expect, and the impetus for this move. For the uninitiated, DayZ is a multiplayer zombie survival mod for the military sim, Arma II. It’s extremely rough around the edges, yet it’s garnered tons of praise and a hefty player base — 1.1 million players to be precise.

Hall’s core concern seems to be security. Hacking runs rampant in the mod, and there’s a fair few annoying exploits. It makes the already challenging game exceptionally frustrating, especially given the finality of death. “The biggest thing… is being able to take on the hacking. It’s something that you never completely solve, you just have to keep on at it. Arma, as you know, is a very trusting engine, because that’s what it was designed to do.” Rather than trying to fix a game others made, he wants to start fresh.

With a new game, DayZ‘s limitations will be of Hall’s designs, constraints he decided upon, not ones that are part of a title he never made. That alone is enough to get me excited. The Arma series is great, but it is not famed for its stability.

Hall seems confident that players will be able to check out the game by Christmas, perhaps as a discounted alpha in the same vein and Minecraft. “If we don’t have something out, say, before Christmas, then something’s gone wrong.” With the sun and the heat that seems to very far away, but considering it was only just announced that’s fairly speedy.

Additional map packs and new areas via DLC are options the team is considering, but right now the focus is on perfecting the core game using the mod’s design philosophy.

A fansite, DayZTexas has thoughtfully put together a fairly extensive list of changes planned for the standalone game. The list is from an AMA session on Reddit which Hall participated in.

The standalone future of DayZ, and what it means for players [PC Gamer]