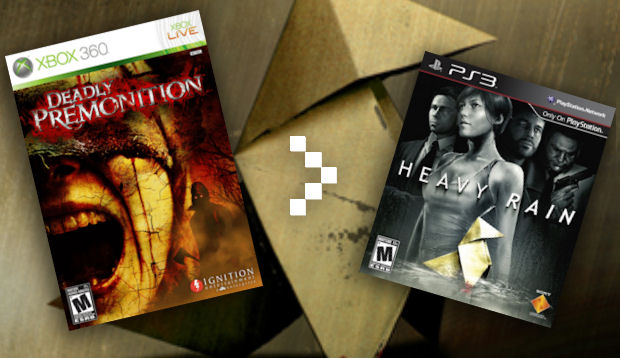 Some people were upset by the two reviews. Yesterday, the Destructoid tips line received an email from somebody called Tan with the subject, “JIM STERLING, I HOPE YOUR FAMILY BURNS IN HELL.” Shortly after, we got another saying “YOU GUYS ARE A BUNCH OF XBOX FAGGOTS. GO SHOVE AN XBOX UP YOUR ASSES.”

Now, people like Tan may look like they’re lashing out at your humble writer. It may appear as if they’re angry with me for saying a budget game like Deadly Premonition can provide a superior experience to a Triple A, heavily marketed, deceptively derivative console exclusive. The truth is, however, they are not angry at me. They are angry at themselves. They’re angry at themselves for being so stupid as to believe Heavy Rain is a truly great game, and they are furious at having ignored such a brilliant creation as Deadly Premonition. It’s just easier to lash out at somebody else and project all one’s hatred onto an innocent messenger, who was merely spreading the good word.

Unfortunately for them, the truth has come out. I am merely a server in truth’s soup kitchen, handing out steamy bowls of righteousness to the hobos of misinformation. Read on as I explain, in no uncertain terms, exactly why Deadly Premonition is blatantly better than Heavy Rain.

Some people (idiots) believe that I hate Heavy Rain because it is new and unique. The truth of the matter is that these people are gullible fuckwits who believe that Heavy Rain is unique just because Sony told them that’s what it was. People who can think for themselves and actually possess some intellectual standards have realized that the game is not really new at all.

The game is billed as an interactive movie, and what that means is that it essentially plays itself while you make some choices now and then. We’ve already had that game. It was called Dragon’s Lair and that was published in 1983. The story was just cobbled together from M Night Shyamalan movies and then covered in David Cage’s spunk. The gameplay is basically Guitar Hero without the music, and ideas lifted from Quantic Dream’s last game, Indigo Prophecy. Hardly a breathtaking new vision for what games could be.

Deadly Premonition, on the other hand, is a truly unique game. Open world survival horror in which an FBI agent with a multiple personality disorder sees letters in his coffee? Already this is more original than Heavy Rain. Deadly Premonition rips off nothing, but many things have ripped off Deadly Premonition. Remember Twin Peaks? Yeah, they totally copied Ignition’s stellar game. Just look at the similarities between them and you’ll see what I mean.

Deadly Premonition was originally called Rainy Woods. This is because the main plot involves a serial killer who strikes when the rain falls. Sound familiar? Of course it does, because Quantic Dream copied Deadly Premonition like a stupid child who keeps peeking over the shoulder of the smartest kid in class. Both games are thrillers which feature FBI agents tracking down a killer. Both games feature quick-time-events. Both games offer choices to the player. Both games have PS2-era graphics. The list of suspicious similarities grows ever larger. The only difference between the games is that Deadly Premonition isn’t a pile of fucking shit, which is obviously what we think Heavy Rain is because we gave it a 7, known to all as the lowest review score a game can receive.

Sure, Deadly Premonition is one of the weirdest, most fucked up games ever made, but at least it makes sense in its own twisted world. Unlike Heavy Rain, Deadly Premonition is not full of deus ex machina and red herrings thrown in just to sidetrack the player and build up to a shocking reveal that outright contradicts everything that the story had previously established.

Things happen in Heavy Rain that are never explained. They’re just thrown in there to try and confound players and stop them predicting who the Origami Killer might be. When Deadly Premonition reveals the identity of the Raincoat Killer, it didn’t contradict the rest of the story, or ignore plot strands. It sure as fuck didn’t completely go against everything we’d been led to believe about the character’s thoughts and actions. It was fucked up, ludicrous, and very silly, but yet it still made more logical sense than Heavy Rain did.

Most of all, Deadly Premonition makes more sense because it is in a world that is not supposed to make much sense. When something weird happens in Ignition’s game, that’s fine, because the game is not grounded in reality. Heavy Rain tries to be realistic, and yet is crammed full of unbelievable situations, ridiculous characters, and relationships that make absolutely no sense. Just take the sex scene between Ethan and Madison. It had no build. It followed some pretty horrific situations which would not put anybody in the mood for shagging. It was simply sex for sex’s sake, in a frankly pathetic attempt to look mature and grown up. However, because it was so badly written, the context was completely fucked up and the game simply looked stupid.

When you can’t make more sense than a game in which a man talks to his coffee, a great job was not done.

You actually get some emotion from Deadly Premonition:

If you cried over Heavy Rain, you’ve got fucking mental problems. With its two-dimensional characters and awkwardly overbearingly “deep” situations, Heavy Rain is too forced and cockamamie to actually get emotionally invested in. I can’t feel sorry for Ethan as a father because he’s a fucking incompetent moron and has no personality. I can’t feel sorry for his kids because they are stupid and the very personification of a stereotypically annoying child archetype. The kids aren’t endearing. They’re barely developed, simply thrown at the player as if Quantic Dream said, “Kids cause emotions, so start feeling emotions because this IS A CHILD OH MY GOD,” so I really don’t feel the heartstrings being tugged.

I didn’t feel anything for any of the characters in Heavy Rain‘s far-fetched and under-written cast. By contrast, I felt plenty when I played Deadly Premonition. I cried multiple times while playing it, in fact. Cried with laughter, at any rate.

Unlike Heavy Rain, Deadly Premonition is able to draw at least one emotion from the player — sheer joy, over how ridiculous the whole silly experience is. While Heavy Rain is busy trying to coax a tear from the player with cliches and tropes, Deadly Premonition is extracting laughs by the bucketful because it didn’t try so fucking hard. I’ll take a silly comedy over a po-faced and failed attempt to make me weep any day of the week.

Deadly Premonition is home to the greatest cutscene of all time. As you can quite clearly see in the above video, DP has better characters, better dialog, and better music than Heavy Rain, and it uses these many trump cards to piece together what could only be described as art. Art, my friends. Sheer art.

Deadly Premonition, essentially, charges a dollar an hour, and every one of those hours is full of comedy, decent gameplay, and highly memorable silliness. It’s the greatest deal in videogame history and a new gold standard for budget titles. For that twenty bucks, you get a survival horror game, an open world title, a shit-ton of sidemissions and a man who talks about rape like it’s a funny anecdote. You literally can’t do better.

Heavy Rain costs $60 and it plays itself for you half the fucking time.

There are actual consequences for Deadly Premonition‘s QTEs:

Don’t get me wrong. There are consequences and punishments for fucking up in Heavy Rain … but only some of the time. Many of the game’s most thrilling QTE sequences are little more than illusions that you actually can’t fail. Ethan’s big, scary trials in the game? Try and fail them, see what happens. The game will arrogantly take over for you, because it’s so cocksure and egotistical that it simply MUST make you see all the brilliance it has to offer. Having Ethan fail at something, then pass out and wake up with the whole scenario being cleared up for him is bullshit, and it completely ruins the excitement factor.

At least in Deadly Premonition, when you fail, you feel like you’ve actually risked something. The Raincoat Killer remains scary because he can fuck you up at any moment. Which reminds me …

The Raincoat Killer > The Origami Killer:

The antagonists for each game share some similarities. They are both serial killers who frequently taunt the main characters. However, that’s where the similarities end. You see, unlike the Origami Killer, the Raincoat Killer isn’t a little fucking bitch. Since you are probably too stupid to get it, here’s a nice simple list of reasons why the Origami Killer sucks next to the Raincoat Killer:

If DP were a PS3 exclusive, I would have hated it because that is clearly how a sane mind works. Likewise, I would totally have forgotten that Heavy Rain was childishly written and infuriatingly convoluted if I had played it on the Xbox 360, which makes games automatically brilliant because of reasons.

Simple fact: The PS3 is shit, and all its games are shit, and anybody who even thinks about buying a PS3 is made out of shit and has shit for a head and brain. All games developed for it are bad, unless they are multiplatform games, in which case only the XBox 360 version is good. Also, Blu-ray is for gays.

That more or less says it all, I think.