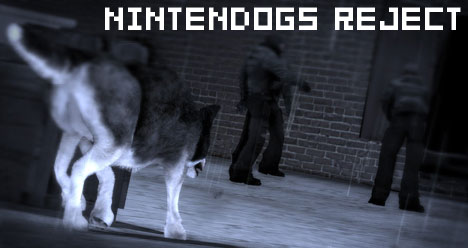 You know what we need? More games where you fight alongside a dog. And since Sega seems to refuse to give us another Shadow Dancer, I suppose this will do — Namco Bandai has announced that Dead to Rights: Retribution is coming to the PlayStation 3 and Xbox 360 later this year.

Described as a “reimagining” of the series, the title will be developed by Volatile Games (Reservoir Dogs), and will feature a “new hybrid combat system.” This apparently means the game seamlessly merges third-person shooting, close-combat hand-to-hand fighting, and a dog. Really, that’s what it actually means.

The series’ protagonist, Jack Slate is back for Dead to Rights: Retribution, so fans of the series should feel right at home. There are fans of this series, right? Are any of you reading this?

VOLATILE GAMES TAKES JACK SLATE BACK TO THE START IN DEAD TO RIGHTS®: RETRIBUTION

25 February 2009 Volatile Games today announced its development of Dead to Rights®: Retribution, a reimagining of the gritty crime drama franchise for the Xbox 360® and PlayStation®3, published by NAMCO BANDAI Games America Inc.

Set in the neo-noir, morally corrupt and nightmarish world of Grant City, Dead to Rights®: Retribution thrusts the player into the epicentre of an intensely dark, dangerous and tragic narrative as vice-cop Jack Slate. Along with vicious sidekick Shadow, Jack must fight to expose the shadowy underworld figures exerting their evil grip over the crumbling metropolis.

All the while, the immersive gameplay and storyline combined with beautifully imagined backdrops and scenarios pulls the player into Jack’s world as he investigates the threats facing the once great city. Jack will encounter a variety of ruthless gangs, each with their own fighting style, and all looking to destroy him and Grant City.

Jack’s special bond with his canine companion, Shadow, makes the duo a formidable team in combat situations. Players will take control of both Jack and Shadow at various points throughout the game to cover potential threats from the enemy.

“Dead to Rights®: Retribution is a fresh look at the franchise, with a ground-up design for the game mechanics, world, characters and narrative,” explains Imre Jele, Project Director for Volatile Games. “We’ve reimagined Dead to Rights for both fans of the franchise and a brand new audience alike.”

“We’re excited to be working with Volatile Games on Dead to Rights®: Retribution,” says Todd Thorson, Director of Marketing and PR for NAMCO BANDAI Games America. “As one of our key franchises we’re confident that Volatiles Games’ combination of innovative design and powerful technology will make a great game that fans and newcomers alike will love.”