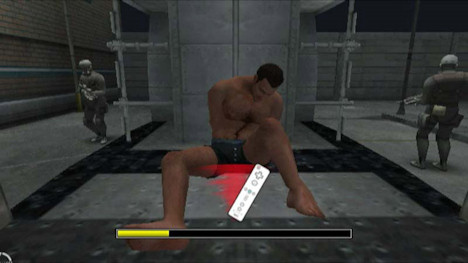 Dead Rising: Chop Till You Drop has been something of a laughing stock among the majority of the gamer community, following as it does a well-received Xbox 360 title that offered pretty good graphics and, more importantly, a mall absolutely stuffed with countless zombies that were begging to be brained.

Unfortunately, Dead Rising‘s upcoming Wii counterpart is less impressive. A comparitive handful of zombies appear on the screen, and the graphics are not what one would call impressive. However, does the game really look like a prolapsed dog anus, as many argue, or is it perfectly adequate?

Our resident Wii fanboy Jonathan Holmes unsurprisingly spoke up in this game’s defense. As Destructoid’s most public fan of all things waggle, he argued that the game actually doesn’t look terrible at all, going so far as to say its graphics are actually good. Naturally, there was a staff debate, and the results were considered almost amusing and interesting enough to post. So we’re posting it.

Read on for in-depth and philosophical discussion.

Why is it that I think this game looks good?

Adam “I hate graphics” Dork: Cause you aren’t a GrafxWh0r3 and can enjoy a game that doesn’t have ub3r grafx!!! Heck, I still think some NES games look REALLY good. Metal Storm? Power Blade?

Burling: Agreed, but it looks like they tried to go super real and failed horribly.

Holmes: I think the graphics look fine. They do look cheap, they do look a bit bland, but if this was last-gen, I don’t think anyone would be calling this game ugly.

Jim “Bias against PS3/360/Wii” Sterling: Yeah and if we lived in a world where pants hadn’t been invented, we wouldn’t think it was crazy to run around with your cock exposed.

But we don’t LIVE IN THAT WORLD, TRON!

Holmes: And that’s the world I want to live in, Jim.
But seriously folks, regardless of the what world we’re living in, a game either is painful to look at or it’s not, and this game is not painful to look at. It looks last gen, but who cares? I liked last gen just fine.

Sterling: I think part of the problem is that Dead Rising Wii has an Xbox 360 version to be directly contrasted to, and it looks abhorrent in comparison, mostly due to poor emulation of the original game. The Wii is capable of games that still look pretty (Sonic and the Black Knight looks great, visually), but when you’re following a hi-def game full of beautifully gory zombies with … that … the dip in quality is infinitely more noticeable.

I also think that people hate to see a game that they love changed, in their opinion for the worse, in order to fit on a console that they see as the worst thing that’s ever happened to the evolution of gaming as a medium.

If you love seeing game consoles get more and more powerful every five or so years, then it’s only logical to perceive the Wii as being THE WHITE DEVIL?

Sterling: Nah, my problem with the Wii is that it introduced gaming to the same type of people who made “The Fast Food Song” a hit record. Nothing to do with graphics.

Jonathan “Kentucky Fried Chicken & A Pizza Hut” Ross:  I have googled Fast Food Song and now my life is worse.

The future of videogames.

Ross: The highlight of the video is when a random black man walks on the screen and the dog gets pissed and shoves him away for no reason.

Holmes: I can’t wait to watch this shit!