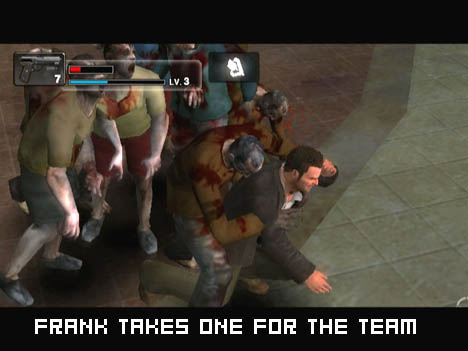 These Dead Rising: Chop Till You Drop screens make me want to go to the mall… and buy the Xbox 360 version. I’m kidding, Capcom. Kidding!

While the Wii reinvention of Dead Rising may not look as great as the Xbox 360 version, it’s sure to make up for that in control options. I want to bash faces with face bashing motions. Don’t you? I love what Capcom did with the Wii-ification of Resident Evil 4, so if they put the same amount of work in Chop Till You Drop, then there will be no worries here. And speaking of RE4 Wii, DR:CTYD uses the same engine – a good thing in my book.

Here’s a bunch of screens new for you to pick over, including plenty of weapon play. I can only image that these bats and chainsaws will be much more fun to use with Wii waggle implemented. The gun targeting looks to be similar to RE4 Wii’s targeting, which would be much better than that of the original Dead Rising.

Now that they’ve “fixed” the game’s save system, this could end up being even better than the Xbox 360 version. What do you think?