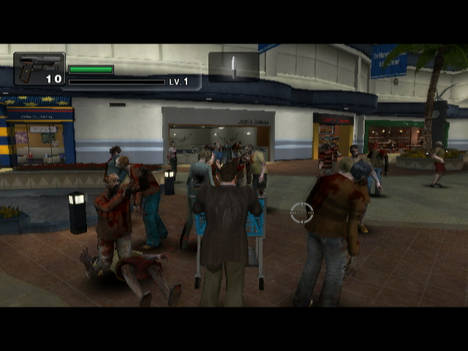 Last week, Famitsu revealed that Dead Rising was being ported over to the Nintendo Wii. With such a bombshell announcement like that, you’d think that this would have been announced at E3 last week …

Anyway, Capcom just sent over the official word announcing that Dead Rising: Chop Till You Drop will be coming to America sometime this Winter. The Wii version will have new features including waggle controls, a Resident Evil 4 Wii aiming system, a streamlined story, and an improved saving system.

The press release, which you can check out after the jump, also states that the game will still have “Hoards of enemies on screen at once”. I have to wonder what horde really means in terms of the Wii’s power. The screens that were sent along don’t show off that many zombies, but we can’t really judge the zombie issue until some videos are released.

Also, the American title for the game sucks. Yeah, I get it. It’s a twist on an old saying. But the Japanese title of the game, Dead Rising: Zombie Sacrifice, sounds so much better.

Taking advantage of the same proven technology that brought Resident Evil® 4 so successfully to Wii, Dead Rising: Chop Till You Drop delivers a more immersive, intuitive and interactive experience as players use the Wii Remote to shoot, slash and bludgeon their way through a zombie infested shopping mall, fighting for survival.

Dead Rising: Chop Till You Drop follows the harrowing tale of Frank West, an overly zealous freelance journalist on a hunt for the scoop of a lifetime. In pursuit of a juicy lead, he makes his way to the small suburban town of Willamette only to find that it has become overrun by zombies. Frank escapes to the local shopping mall, thinking it will be a bastion of safety but it turns out to be anything but. It will be a true struggle to survive the endless stream of enemies, but players will have full reign of a realistic shopping centre and its varied stores offering an endless supply of real and makeshift weapons to fight off the flesh-hungry mob. If Frank is running low on health he can pay a visit to one of the many restaurants or cafes for a meal in order to restore his energy and continue the fight.

The game is split into a series of individual cases, all of which Frank must complete in order to gain vital information that will allow him to piece together the truth behind the horrendous epidemic. In addition to the cases, players will be faced with the dilemma of deciding the rescue priority of the residents of Wilamette who also sought sanctuary in the mall. Depending on the player’s skill, some may not be so fortunate as each rescue needs to be undertaken in a set time period, therefore players may need to delay completion of a case in order to save a fellow human.

Dead Rising: Chop Till You Drop’s infectious humor delivers some welcome relief from the incessant tide of zombies with players able to dress Frank up in a variety of comedic costumes and take on the undead hordes with a selection of improvised and sometimes highly ineffective weapons such as a toy sword or a football.

Dead Rising: Chop Till You Drop includes the following features:
• Utilizes the same engine as Resident Evil 4 Wii edition.
• New level of interaction – aim and fire guns, swing and throw weapons and shake off zombie attacks with added Wii Remote functionality
• Huge environment – expansive indoor and outdoor areas of the mall provide a variety of different locations to explore
• Improved save functionality allows for more seamless gameplay
• Hoards of enemies on screen at once resulting in non-stop, pulse-pounding action
• Anything in the mall is at Frank’s disposal
• Grab environmental objects like umbrellas and benches to use as improvised weapons
• Snatch items from different stores to use as weapons including golf clubs, lawnmowers, frying pans and more
• Consume food and drink to revive health