The first showing of Dead Rising 3 looked good, but it also looked pretty serious. I feel in love with the franchise for its weirdness, so that first showing at E3 had me concerned. But from what I’ve seen at Tokyo Game Show this week, I’m no longer worried. Now I know that Dead Rising 3 is about as crazy as it gets.

Capcom Vancouver’s Mike Jones, producer on Dead Rising 3, showed off a fair bit of live cooperative gameplay in a TGS media meeting today. He showed us that it’s still wholly Dead Rising — lots of zombies, lots of weapons, and lots of odd situations to get yourself caught up in. Jones says that the power under the hood of the Xbox One let them increase the world size several times over, as well as increase the number of zombies and the quality of in-game physics. It’s now an open streaming world that he estimates would hold the combined worlds of Dead Rising and Dead Rising 2 several times over.

Dead Rising 3 is as weird as it is big. Main character Nick, and his optional co-op buddy, stranded trucker Dick, seem like pretty normal guys, but Dead Rising 3‘s world lets you guide them into some pretty strange situations. Whether it be beating zombies with a boom box or screaming at them with a megaphone, there’s rarely a dull moment. 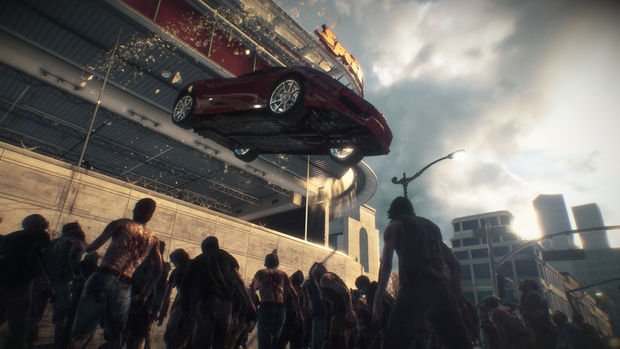 The ability to combine found weapons and items to create others is so off-the-charts crazy that you can’t help but love the feature. Crafting one thing from two others is nothing new to open-world games like this, but the junk mashups are so goofy here that it looks like making them is a game in itself.

For example, mixing a boom box with a traffic cone shouldn’t make…well, anything. But in Dead Rising 3 it makes a weapon that fires…sound? Add a speaker to that and you have a power shot of sound that knocks zombies backwards. Maybe add another item to create electric shots that not only blast the undead back with sound, but also adds shocks that move through entire hoards. They had it worked up so that three additional speakers had this monstrosity shooting a wide range of loud sounds. It was powerful enough to mow back hundreds of enemies as well as throw vehicles around. Hilarious stuff.

Take a scythe and add a katana to make what they call a Grim Reaper. Add a mask to that and it somehow now shoots skull projectiles. Add gas and they become flaming skulls. Of course. 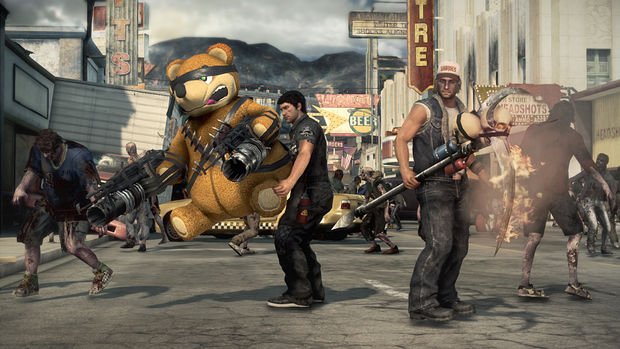 The silliness continues with the return of Freedom Bear from Dead Rising 2. Add guns to a stuffed teddy bear and it becomes a really messed up turret of sorts. We saw it combined with a tricycle to become Pushy Bear — a drivable turret. Add a speaker and it becomes Decoy Bear, allowing it to attract zombies to it for more kills. Finally, add explosives and it becomes Grisly Bear. See what they did there?

The progression looked very easy in this demo, but Jones says that getting this far with a creation takes quite a bit of work. You’ll have to discover blueprints in the world first, and then find the items to make them.

Vehicles serve as both transport and weaponry in Dead Rising 3. There are more types this time around, with trucks, motorcycles, ambulances, street sweepers and more joining your standard city cars. We saw a steamroller combined with a motorcycle to create a Roller Hog. Nick drove while Dick rode in the back, throwing explosives. Blood rained down, and then cooked from the included flame throwers. 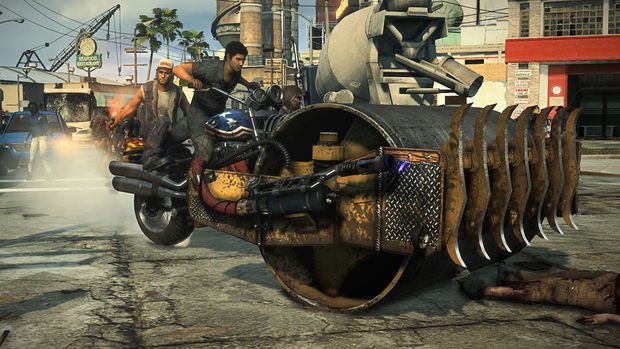 With the freedom presented, the situations are hilarious. At one point, Nick was in a Japanese schoolgirl outfit, pushing around Pushy Bear through waves of zombies. Dick followed up with his flaming skulls coming from his Grim Reaper. Together they laid waste to every zombie in site. For a bit, at least.

As a sort of finale, a Massive Bomb was made by combining every type of explosive you can find. They used a companion SmartGlass (via MS Surface) app to drop in a flare to draw zombies to one place. Nick carefully planted the bomb and walked away. It exploded behind them, taking out 427 zombies at once. Their clothing burnt off them in the explosion, leaving Nick and Dick standing there in their underwear. 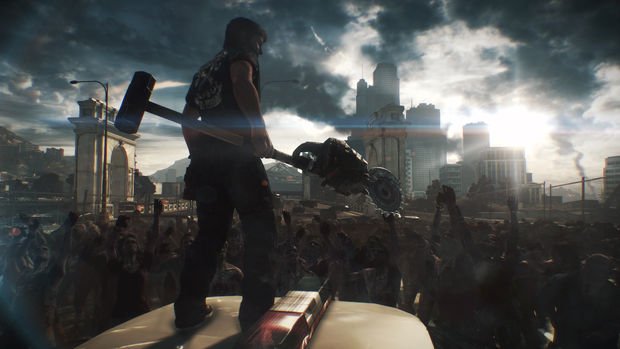 My initial impressions of Dead Rising 3 were way off base. Serious game? No. This game is crazy! The open-world co-op looks to be really fun. It’s all wide open, actually, from character and item leveling to story progression. The standard story mode does not have time limits or other restrictions, leaving you open to explore. They just want you to be able to jump in, find some crazy things, and then blow shit up. And that’s all I’ve been wanting, really.

The first Dead Rising made me happy to own an Xbox 360 at launch. I think I’m feeling the same way already about Dead Rising 3 for Xbox One.