Capcom has released the latest trailer for Dead Rising 2, one that supposedly reveals pieces of the game’s story. But really, it’s a all a bit too vague.

“A renegade man with a tragic past in the wrong place at the right time must uncover a dark conspiracy and survive a new nightmare,” the trailer tells us while introducing protagonist Chuck Greene, who at one point yells that he’s been set up. Okay, so what the hell is this all about?

Yes, the trailer is cool, don’t get me wrong. But if you still have no idea what the hell is really going on after seeing it, you’re not alone. When I asked developer Blue Castle games to be “less vague” about the story, they laughed at my request and directed me back to the trailer. Fortunately, I’ve got the scoop. Hit the jump for for the “less vague” version of the Dead Rising 2‘s story. 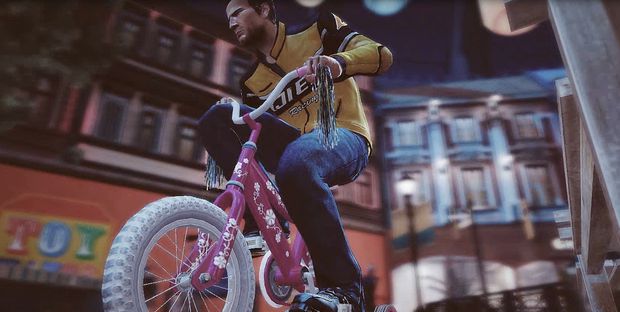 Greene, a former motocross champ, has made his way to Fortune City, a Las Vegas replacement after the original Sin City was destroyed in the zombie outbreak. While there he participates in Terror is Reality, a televised game show that has contestants facing off against an arena of “controlled” zombies for cash and prizes.

Chuck’s not doing it just for the 15-minutes of fame or the riches, though. He’s motivated by the love for his daughter Katey (shown in the trailer) who has been bitten and infected with the zombie virus. The only thing that keeps her from “turning” is a drug called Zombrex, a one of the kind drug that comes with an expensive price tag. 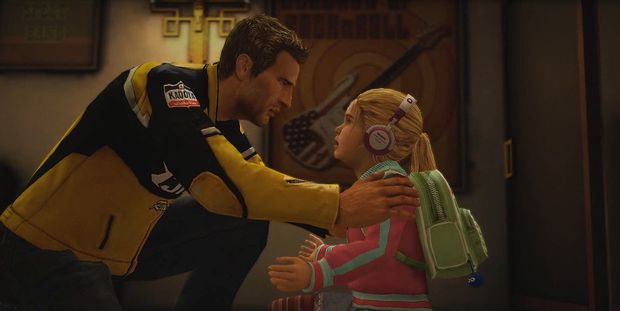 Once fortified against the zombie disease, Fortune City gets hit with an outbreak while Chuck’s in town. With his daughter in tow, he must survive for 72 hours while providing the Zombrex for his daughter, keeping her from turning into a flesh eating creature of the damned.

Rest easy, there is a story here — Dead Rising 2 isn’t simply about killing zombies with spiked bats and vacuum cleaners fitted with saw blades. But if it were, I don’t think anyone would argue, would they?