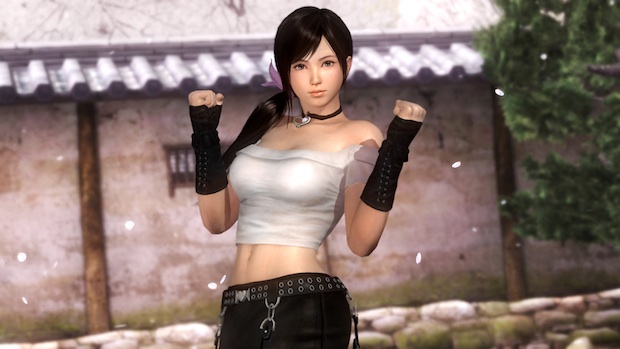 Here’s a fat update on Dead or Alive 5 Ultimate, coming this September for Xbox 360 and PS3.

First, a Pop Idol character costume set has the girls of DOA dressing up like music stars. Ayane and Kasumi go J-Pop, while Hitomi, Kokoro, Leifang and Mila do the schoolgirl thing. Helena, Momiji, Lisa, Rachel, Tina, and even Sarah get “bad girl” getups in this set.

The newly revealed Team Fight has you picking a team to go up against waves of enemies. A Combo Challenge in the tutorial mode will let you practice moves like Power Launchers and tag combos. And Survival Mode is exactly as it sounds, though it features dropped items that cna be picked up for special benefits. For example, a watermelon will restore health.

It’s not a gameplay mode, but “Movies” sounds like it’ll let you play dress-up, with the ability to change characters’ hairstyles, costumes and more. The image in our gallery shows Helena’s chest selections.

Finally, preorder people out there can expect exclusive costume packs from GameStop and Amazon at launch.

In our gallery you’ll find pictures of it all, including the new costumes, pre-order costumes, and all of the new modes listed here.