At this year’s Tokyo Game Show, Team Ninja finally revealed that their fabled fighting franchise — known for its fatal females and potent physics — was returning, with Dead or Alive 5 (DOA5). Almost six years have passed since the previous game and, with that, former lead designer, ex-head of Team Ninja, Tomonobu Itagaki has long since left the prestigious game developer.

A lot of time has passed, bringing forth a lot of change, but it’s within these obstacles that the series for the first time feels as if it is seeing a proper evolution in design, rather than just an aesthetics upgrade. The focus for DOA5 is creating “fighting entertainment” and after going hands-on with the game’s first playable demo (a roughly 15 percent build) it’s fairly easy to see that Team Ninja is achieving that goal. 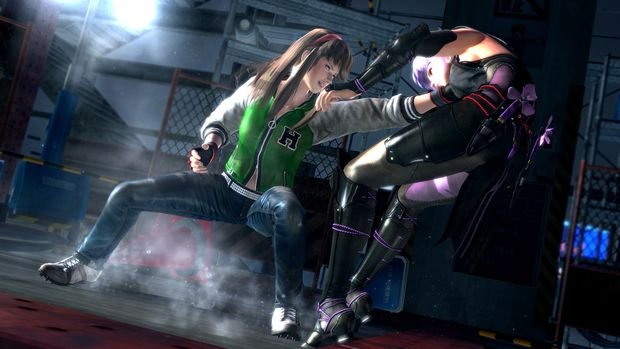 During the teaser trailer at TGS, DOA staples Ryu Hayabusa and Hayate battled it out, in a highly cinematic duel, on the rooftop of a bustling city highrise amongst the night sky. The action was fast, filled with electrifying effects, and culminated with Hayate unleashing a furious attack that sent Hayabusa tumbling to the ledge of the crumbling rooftop. It was an amazing spectacle and one that showcased the imagination behind Team Ninja’s new direction. But as amazing as it was to watch, creating this sort of [email protected] insanity is even more satisfying.

In showcasing DOA5, Team Ninja unveiled its next two fighters: femme fatale Hitomi — who made her debut in DOA3 — and legendary kunoichi, Ayane. Along with Hayabusa and Hayate, I was able to take each fighter for a stroll in the stage that starred in the TGS trailer. Though it’s been quite some time since I’ve dabbled with the DOA series, each character felt very similar to their DOA4 incarnates. The same attack, guard/counter, throw system is in place and outside of a new attack called the “Power Blow” not much has been altered within the basics of DOA‘s fighting system. 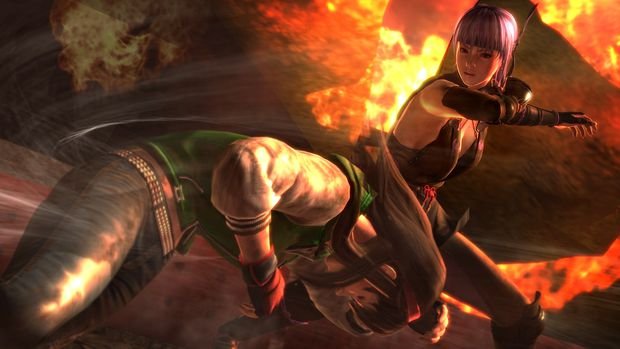 To me, this is not a bad thing. I have always enjoyed the way the game forces players to use diverse tactics to succeed in combat. Those who tend to mash the same combinations over and over, are generally easily picked apart from seasoned veterans who understand the fine balance of countering high, middle, and low attacks. And while DOA5 feels the same at its core, it’s in the game’s new Power Blow technique that DOA is able to open up into a much more grandiose, over-the-top, roller coaster ride.

With a simple tap of either the RB or R1 button (Xbox 360 or PS3) this new attack is unleashed. The crazy attack that Hayate unfurls at the end of the TGS trailer is actually, this devastating attack landing. What makes this attack so special is — besides dealing greater damage in highly cinematic style — is it actually gives the user the ability to direct the trajectory of the impact. DOA has always had impressive, expansive stages — complete with different levels and destructible environments — but navigating to see all the sights has always, proven difficult to accomplish in the heat of battle. 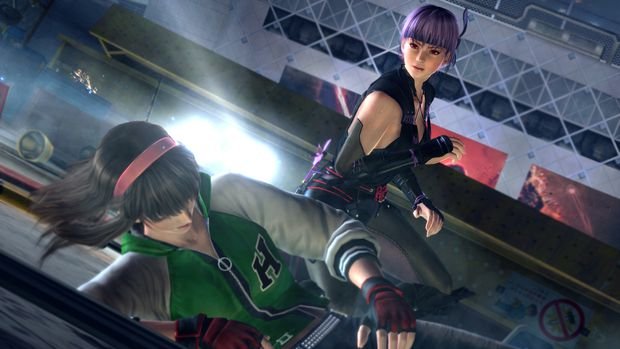 This is where the Power Blow comes in. Once connected, the player has a brief moment to decide exactly where on the battleground they want to launch their opponent. In the rooftop stage players could guide their opponent into generators, off the side of the building to the streets below, and eventually head-on into an oncoming car. By far the most dynamic environmental hazard was when a player was knocked off the side of the building. When this event is triggered the, players are thrust into a sort of impromptu QTE event. The falling player has a quick chance to grab the ledge( with a quick button press), then quickly try to predict the oncoming strike from their opponent. Success leads in a block, or perhaps an evasion, but failure leads to an even more devastating attack.

With the ability to control the flow of the fight, the Power Blow — more so than ever — makes each environmental hazards a strategical component in battle. For those wondering, while the Power Blow is simple to execute, it is also as easy to counter when used as a singular strike. The key to its success will be in incorporating the deadly drive into combinations — which at the moment is fairly challenging due to the moves slow start-up animation. 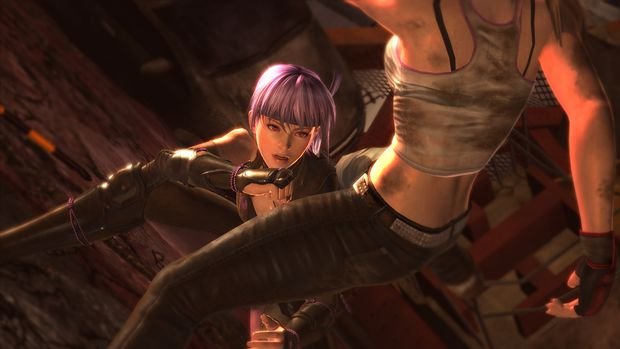 Finally, I wanted to touch on the sense of presence, within each character, that Team Ninja i s looking to build in DOA5. The series has always exemplified beauty — from its stunning backdrops to its more buxom babes –but it’s the finer touches that make each fighter seem more involved this time around. Sweat and dirt glisten and cover each fighter during the coarse of a fight. And while not groundbreaking technology, it adds certain “charisma” — something Team Ninja hopes to accomplish in creating DOA‘s “fighting entertainment.” — to each character, as the feel more invested in each battle.

Dead or Alive 5 is slated to come out sometime next year. There is a lot of competition for Team Ninja’s return to the fighting world, but after getting a chance to give the game a brief run, my thumbs are feverishly twitching for more insane action. What remains to be seen though, is whether the rest of the gaming community is ready to give this series another ride. Regardless, one thing is certain, Dead or Alive is back!