During my time on the show floor at PAX East 2015, I had the pleasure of sitting down with Dodge Roll Games to get a hands-on demo of its new gun-fighting dungeon crawler, Enter the Gungeon. When you think gun-centric games, Gearbox’s Borderlands series might be one of the first that comes to mind. That’s the point of AAA marketing campaigns, isn’t it?

The Borderlands titles may have a metric shit-ton of guns, but save for a handful (talking guns, etc.), most of them felt pretty much the same to me after a while. Instead of 10 bazillion procedurally generated variants of the same weapon types, Dodge Roll only needed 200 to fill out its game. That might not seem like many by comparison, but the weapons that do appear in Gungeon are all individually hand-crafted down to the very last pixel.

Each one features its own unique reloading animations, and it’s also worth noting that certain weapons will have their own specific effects on the environment. For example, crossbow bolts will stick into walls or other objects and the living fish shot from the Fish Gun are programmed to flop around on the ground until they eventually asphyxiate. That’s attention to detail, people.

Played from a top-down perspective, Enter the Gungeon handles a lot like Vlambeer’s magnificent roguelike shooter, Nuclear Throne. I think it’s a safe bet to say that if you liked Throne, you’re probably going to love what Dodge Roll is creating here. There’s a lot of similarities between the two, but the overall production quality in Gungeon is undeniably on another level entirely.

Not only does the game play exceptionally well, it’s got the gorgeous good looks to go along with it. If you learn anything about Dodge Roll by playing this title, it’s that the studio takes an almost obsessive amount of pride in what it does.

Gameplay is exactly what you should expect from a high-quality, top-down shooter. If you’re a fan of the genre, Dodge Roll’s more than got you covered. The action is tight, the mechanics are smartly implemented, and the game’s challenges are set to ramp up quickly as you progress.

The developers made note that in the demo we played, the action had actually been toned down somewhat to accommodate newcomers. In the retail version of the Gungeon, you’ll be dodging bullet-hell patterns as early as the second level.

The full game will be comprised of five separate floors, with each floor containing about 20 different rooms. To help you navigate these large spaces, you can hit the tab button to bring up a map overlay which displays the rooms that have been previously visited and any rooms that haven’t will appear as question marks on the map.

Another convenient feature added to the dungeons are teleportation portals. They’ll pop up at certain points in a dungeon to serve as check points and are also placed in important locations (outside a boss room, item shops, etc.) to avoid tedious backtracking for items or health.

To avoid spoiling the game Dodge Roll didn’t go into great detail about each of the different levels, but it did mention that fans of Bruce Willis’ Die Hard are in for a special treat, in that one of Gungeon‘s levels was actually inspired by the office building featured in the movie. Other level themes mentioned were a moving train, a library, and a final level titled Bullet Hell. 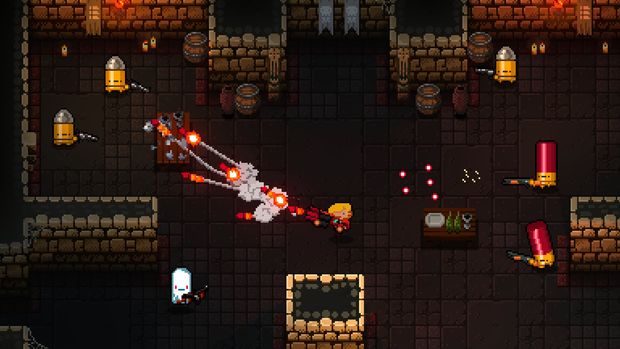 Finding new and better items will work in a similar fashion to Team Meat’s The Binding of Isaac. From what I gather, you’ll discover at least one chest in each of the different levels that will contain new weapons to upgrade your arsenal. You can only carry a maximum of three weapons from the start of the game, so choose wisely. However, Dodge Roll did hint that certain items can increase your carrying capacity when you find and equip them.

The variety of weaponry in this game is just tremendous and from what I gather, should cater to just about any play style and sense of humor. Towards the end of the demo, the team member I was working with entered dev commands to show me some of the overpowered late-game weaponry. Of specific note, I was treated to a sneak peek at a beast of a gun that they’ve named the Yari. It’s a low-ammo-capacity chain gun/rocket launcher and its effects were, to say the very least, devastating.

Also shown were weapons that could inflict a suite of different status effects such as charm, freeze, electric shock, burning, poison, as well as liquid-firing weapons that can be used to start raging fires on the board, immolating hoards of enemies. 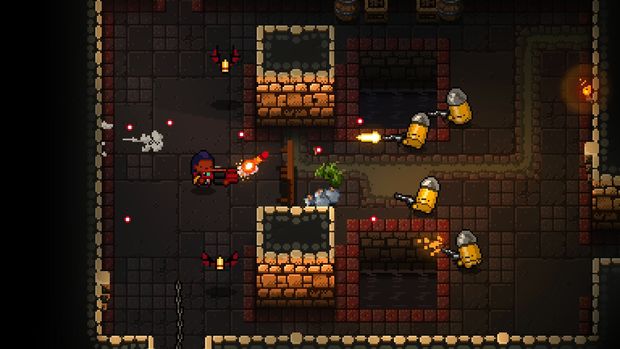 Enter the Gungeon was a shoo-in for one of my editor’s choice picks at PAX East this year. With its charming, pixel-perfect art style, its fast-paced and challenging gunplay, and the obvious love and dedication the team has poured into the title, how could I not select it for editor’s choice?

Games like Dodge Roll’s and Harebrained Schemes’ Necropolis are, in my opinion, perfect examples of some of the very best indie games that are scheduled to release in 2015. Enter the Gungeon is due out in Q3 this year for Windows, Mac, Linux, and PlayStation 4.