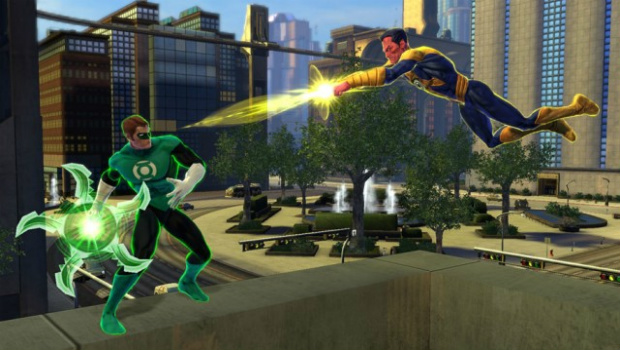 (For part two of my mission to rid Metropolis of crime, go here and find three here)

DC Universe Online has been around for less than a year. Despite the initial hype and excitement, the superhero MMO started to hemorrhage players as soon as the first month was over. A counter-intuitive chat system and limited end game did not engender any love towards it. You could easily reach the level cap in a week and even casual players had no difficulty getting their hero or villain to 30 by the end of the month. Upon getting to max level, players were greeted by grinding — lots of it. It was like all of the grinding we have come to expect from MMOs had been removed from the leveling experience entirely and dumped into the end game.

But action has been taken to save this flagging MMO. The North American servers have been combined into two mega-servers (one for PvE and one for PvP), hard light powers and new raids have been added thanks to the Fight For the Light DLC, and it’s going free-to-play on the 19th of this very month. It also got a big update recently, adding a new Fortress of Solitude raid. So, because I secretly love Hal Jordan, I’ve decided to take another shot at DCUO. I’ll be fighting crime and villainy, breaking hearts and, perhaps, changing minds, including my own. 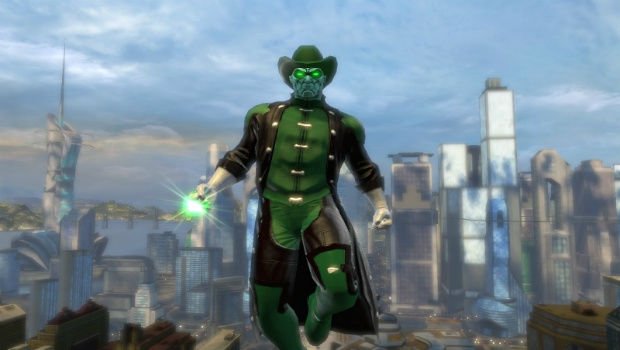 He’s a space cowboy, not because he’s an extra from Firefly, but because he wears a stetson (stetson’s are cool) and his body is made of moon rock. He’s also, apparently, a member of the Green Lantern Corps, specifically a reservist. I say “apparently” because nobody has told him that he’s a Green Lantern. One morning, he just woke up in a pod on Braniac’s ship, someone had dressed him a ludicrous costume and slipped a tacky, green ring on his finger.

DCUO‘s character creator is bound to disappoint those weaned on City of Heroes and Champions Online, but it’s still light years ahead of most conventional MMOs. The two new additions to the creator are the light powers and a greater range of body shapes. Finally you can make a skinny, tall, big-headed alien. The skins are limited and there’s no option to customize features; you just select the skin and you’re stuck with that face, although you can still fiddle with the colors of course.

Costume pieces are fairly limited as well, but there’s enough there so that you can put together a reasonable starter costume. Collecting new costume pieces is a fairly major part of DCUO, so your options expand drastically and quickly. Any new gear you find will unlock new styles for you to switch out on the fly. By hunting down various briefs, investigations, and collections, you can increase the content of your invisible wardrobe (or phone booth) significantly.

Faced with fighting an army of robots alone, Zentarim quickly accepted the aid of Batman’s chum, Oracle. She guided him through Braniac’s ship and eventually led him to a showdown with the ship’s controller. Johnny come lately, Superman, lent a hand destroying the last of Braniac’s minions. Armed with his staff (probably a pipe ripped off a wall or something) and hard light claws, Zentarim was an unstoppable force of emerald destruction. Then, freedom!

While I was probably expecting too much, I was a tad disappointed that the introduction and compulsory tutorial remained exactly the same as it was at launch. It would have been fantastic if the game had given me some context for my new hard light hero. But it didn’t. At the start, there is no mention of the Green Lanterns — you’re just yet another schmuck who got some super powers from a doomed future after a time traveling Lex Luthor released exobytes into Earth’s atmosphere so humanity could rise up and fight a bottle-loving robot. Then you got captured by Braniac. How mundane. 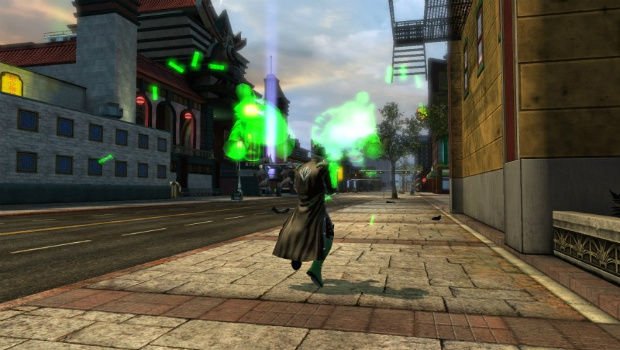 Because spaceship destroying moon men are fairly handy in a fight, Zentarim gets conscripted by the Justice League and is tasked with protecting Metropolis. The district of Little Bohemia was in rather dire straits, with an army of intelligent gorillas rampaging through the streets, Braniac’s minions capturing people and a whole bunch of other problems that only a well dressed rock could solve. But Zentarim isn’t much of a thinker, so he solved most problems with an onslaught of hard light constructs. Even Bizarro, Superman’s twisted clone, couldn’t handle a strafing run from a jet construct. Evidently, Zentarim has been getting tips from Hal Jordan.

No real additions have been added to the early game content. There have been tweaks and fixes thanks to patches, but these are the same missions you will have already done, possibly several times before, if you’re a returning player. The missions still appeal more to DC fans than they will others. The storylines tend to be predictable but still classic comic book fare, with plenty of villains and heroes, both recognizable and more obscure.

The new powers made things a lot more interesting, however. The Green Lantern abilities were never going to be easy to recreate in a video game. The constructs come from the ring user’s willpower and imagination, that makes it hard to turn into a limited set of powers. DCUO created a mix of abilities, some iconic (like Hal’s jet fighter or the mini-guns), and some nods to the camper side of DC (such as the weight and the fan), it’s a diverse bag of tricks.

The light power set is all about combos. The first two powers I selected were claws and mini-gun. When I activated claws I could string the attack four times or I could could hold the right mouse button to end with combo with a mini-gun attack. About half of the power tree (both support and damage variants) is made up of combo attacks. Some people might find it a bit too “clicky” for their tastes, but DCUO is like that regardless of your character’s powers. I find it more visceral and immediate than other MMO combat mechanics, but it’s not for everyone. 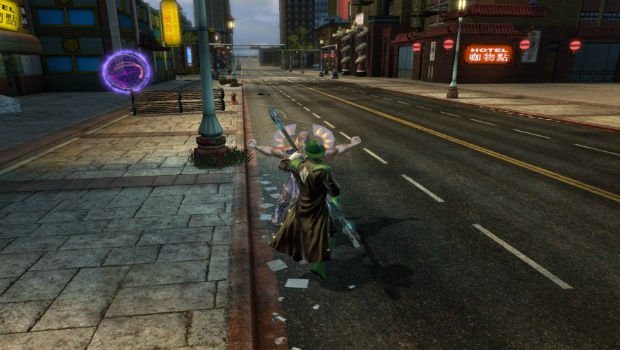 After saving the Flash from Gorilla Grodd and thwarting the Hive’s attempts to aid Braniac, Zentarim was finally invited up to the Watchtower, the base of the Justice League. The honor was just too much for him, his moon rock body exploded into a million pieces, revealing a soft, cosmic center. He wasn’t really sure if looking like a person-shaped slice of outer space was better than looking like a rock, but apparently sparkles are very “in” so he just went with the flow.

This was the first time I got to check out the cash shop, which had been discussed when the game launched but didn’t go live until June. It was pretty empty. I’m sure it will expand soon, what with the game going free-to-play soon. But right now, there isn’t much to salivate over. There’s the Joker from Arkham Asylum for use in Legends PvP, the Green Lantern DLC which everyone has at this point, a few cosmetic items, and some limited supplies. I had 600 points for some reason (most likely due to resubscribing), so I splashed out and got myself that ridiculous cosmic skin. I still have 200 left over and nothing to really spend it on. I suppose I will save it for later, but I hate it burning a hole in my pocket.

While it’s still a new feature and the game hasn’t gone f2p yet, I still expected to see more. Not long ago, I went back to Champions Online to see what changes had been made since it went f2p. Even before then CO had a fairly robust shop with plenty of content and it’s continued to increase. Alongside the archetypes (power sets) was a whole plethora of cosmetic items, some costume piece and some related to travel abilities.

DCUO, on the other hand, barely has a shop at all. The handful of cosmetic items do look great, but there’s nothing there to make me want to go back and spend money. I don’t want items that screw up the balance, but I’d be happy to drop some cash for iconic costumes or more travel powers. Unless SOE adds more items soon, the only thing new players will want to get is the DLC, which is 1000 points ($10) for the whole thing. I have seen quite a few people with the cosmic skin, though. So that might be a hot seller, too.

Bolstered by his new look, Zentarim accepted a call to battle from his new space buddy, the Martian Manhunter. He traveled to Area 51, currently under the management of Cadmus, and under siege by yet more Braniac minions. They were trying to steal kryptonite, but our cosmic hero and a gang of silent, yet colorful, compatriots saved the day. Swiftly and without being knocked out, I might add.

The early Alerts feel as humdrum as they were at launch. They are a bit all over the place and nobody bothers communicating or working together because it’s simply too much hassle. It’s still much simpler just to shout at the useless bastards I call teammates. The crappy social features and chat system have been a massive problem since beta. While there have been some improvements like the addition of trade chat, it still needs a lot of work. The Alerts were easy, but later ones will likely tax light power users quite a bit. Most of the combos are melee, but at close range, Green Lantern reservists don’t fare so well due to their squishyness. I’m looking forward to being kept on my toes more as I go through them. 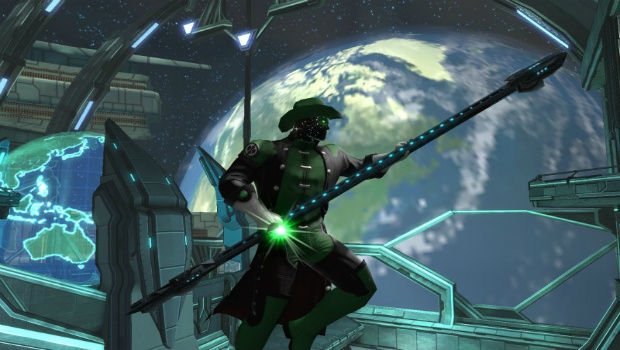 Looking out over the world, Zentarim saw that despite all of his efforts, his planet was still a right mess. Only sparkles and hard light could save the day and he had both in abundance.

Next issue — Zentarim fights more gorillas, goes to the moon and partakes in some Lantern on Lantern action. PvP too, if I’m lucky.