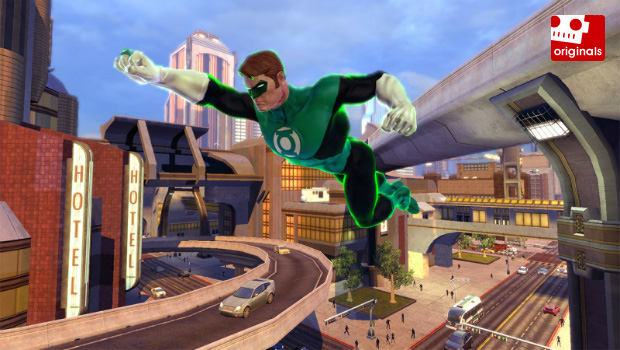 (For the first part of my mission to rid Metropolis of crime, go here and for the third, go here)

When last we saw Green Lantern reservist Zentarim the Space Cowboy, he was brooding about crime and preparing to kick evil in the face and I was preparing for DC Universe Online‘s free-to-play service to go live. Sadly, the tentative date of October 19 has arrived, yet still no word from SOE. So it looks like you’ll have to hold off on your free adventures in Metropolis and Gotham.

But fear not, our cosmic hero is still fighting the good fight on your behalf. He’s been gallivanting in space, introducing demons to chainsaws and making inappropriate remarks about Wonder Woman’s rear. 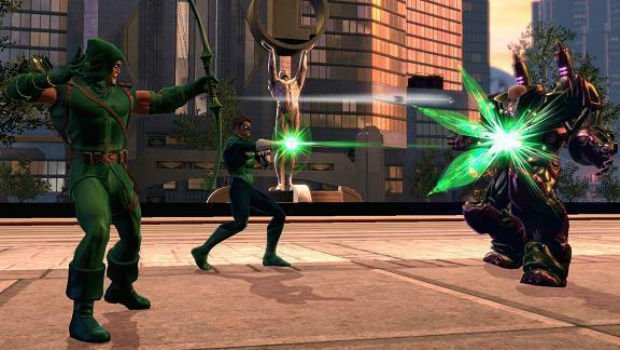 After a string of victories and more press than that media darling — Superman, our emerald champion was well on his way to becoming the face of heroism. So when Queen Bee, ally of Braniac and supreme pest, built a HIVE base on the Moon to mine for exobytes (super power giving nanites), Zentarim was tasked with halting her plans. Along with a trusty crew of JLA hopefuls, our hero fought giants, terrorists and blew up a space ship, yet again. But just as the team was about to reach Queen Bee herself, they were thwarted by a hero’s worst nightmare. A door that wouldn’t open.

I have now attempted the HIVE Moon Base Alert three times with Zentarim and I’ve yet to complete it. After clearing the second to last room, the door to the boss is meant to open. Sadly, it doesn’t. Now, I consider myself fairly forgiving when it comes to bugs in MMOs. These games are huge and constantly evolving, things will slip through the cracks.

However, there’s no way to know that this particular instance is bugged until you reach the very end. When it happened the first time I thought it was a one-off and tried again, when that failed I tried it a third time because I’m an idiot. Mentioning it on the launcher or in game would go a long way towards preventing players from wasting their time.

That is the most glaring bug I’ve encountered so far, but there are many other smaller ones which have made my experience less enjoyable. Especially when many of these bugs were present at launch. There’s graphics issues in the inventory screen with characters not showing up properly, sound errors, broken quests, exploits that have existed since day one, a broken in-game mail system and whole plethora of other issues. Few of them are progress halting, but as they mount up they are starting to piss me off quite a bit. 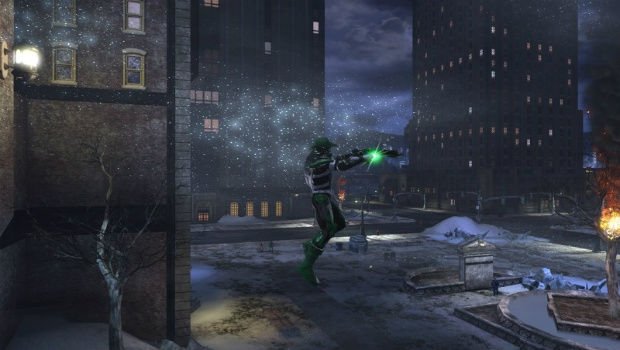 On top of that, there are other issues which, while not being bugs, are just as problematic. Things get thrown around a lot in DCUO and they usually end up exploding. When cars and barrels are being tossed left and right, luck plays more of a role than skill when attempting to avoid getting caught in the blast. Dodging is a pain in the arse. It’s an action game, yet dodging is as slow and unresponsive as a tractor driven by a drunk. With stuns, roots and explosions going on all the time it feels more like a crowd control game than an action game. To make matters worse dodging uses up power, which is what you use for abilities, there’s no separate pool for it.

Zentarim was rapidly becoming the go-to guy for when shit hit the fan. It probably helped that he could literally summon a giant fan to blow that shit back. He saved the world from a demonic god, became the third wheel on a bromantic date between Green Arrow and Green Lantern, gave Sinestro something to be afraid of and rescued Superman on two separate occasions. When he rescued The Man of Steel for the second time he had to infiltrate the heart of the enemy, the foreboding Hall of Doom. After mopping the floor with mechanical menace Metallo and then Cheetah (like Catwoman but for furries) he finally confronted Lex Luthor. The bald super genius was lording it over his captured Kryptonian nemesis and didn’t anticipate a bright green helicopter shooting his villainous ass. That’s right, a helicopter. With that victory, Zentarim was finally invited to become a full member of the JLA.

By level 15 things had started to get a bit stale. Each mission tends to be broken up into predictable phases, the first few being a mix of “defeat these guys” or “interact with these objects.” The final phase is the most interesting as you enter an instance to defeat that mission’s boss. There tends to be a bit more story and focused action, and the boss battles themselves are occasionally inventive. When I had to rescue Wonder Girl from Giganta, I had to destroy some crystals to break a spell. By touching a crystal I was thrown back only to bounce into another one. It was like a life sized pinball game, silly, but fun. 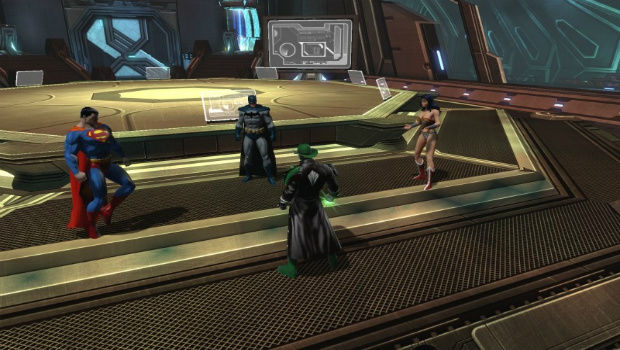 The road to level 30 is a fairly short one. It’s been described by some players as an extended tutorial which prepares people for the bulk of the game, the end-game content. But I find that to be disingenuous. The game already has an unskippable tutorial. Nobody should have to get through hours and hours of tutorials to get to the meat of a game. Because the leveling process is so short, anyone who has done it before is likely to rush through it. That leaves earlier missions rather empty. So other players, seeing how empty that part of the game is, either rush to 30 as well, or simply stop playing.

Most of the pre-30 content is solo content, though. Other than the Alerts which you queue for or the occasional group boss you can do it all on your own, with no difficulty whatsoever. Considering how quiet the game is, that’s a boon. However, I can’t help but think that if the game encouraged people to group up more before 30 it would be a lot more lively. As a single player game DCUO is simply not very good.

With his new position as full member of the JLA, Zentarim knew he had to up his game. No more flirting with Amazonian broads, no more bringing up all those times he saved Superman. It was time to get serious. Super serious. He clocked in hours on the VR combat simulator, learning his most famous opponents’ and allies’ skills, and traveled throughout the world and even beyond it, fighting new villains wherever they appeared. His appointment to the JLA didn’t mean he had run out of things to learn. With every battle he grew more skilled and better equipped. The most important skill he learned was patience. Since many of his allies were barely functioning individuals, he learned to forgive them for their butchering of the English language and barely intelligible insults.

I finally got some PvP in. About bloody time. PvP in DCUO is split into three modes — Legends, Arena and open world. The Legends mode tends to be the one with the shorter queue and thus is the one I’ve had the most experience in, which is unfortunate because it’s a novelty at best. The idea is that you take on the role of a recognizable villain or hero; you can play as either, regardless of what side you are on. Players start off with Harley Quinn for villains and Robin for heroes. 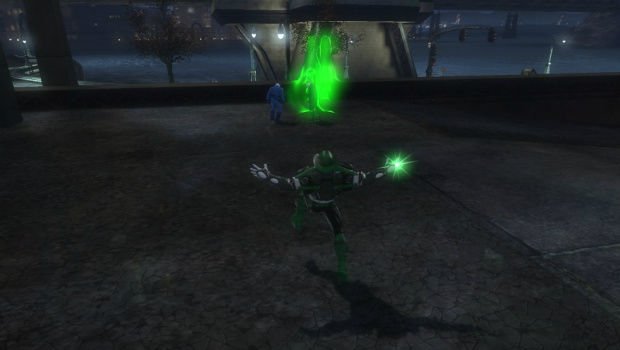 By competing in the matches you earn points that can be spent on unlocking more characters or exchanged for other points for gear and items. While it can be an amusing time waster, it’s not nearly as fulfilling as using your own character. There are three arenas in Legends; two are King of the Hill and the other is a Capture and Hold mode.

Arena allows you to use your own character and pits you against a team of villains in a variety of settings, from Australia to the Moon and even Superman’s Fortress of Solitude. Unlike Legends there’s also a deathmatch and capture the flag mode. So far I’ve really enjoyed the Arena PvP, but I haven’t done particularly well.

Technically, you can participate quite early on. The only problem is that the queues are always empty. I wish I was exaggerating. In the three weeks I’ve been playing, my first Arena match was only a few days ago. Once again, the rush to 30 gets in the way of me enjoying the game. While people still queue for Legends they ignore Arena until they are max level. Since I’m not fond of Legends, I had very few points I could trade for other points to purchase PvP gear. So I’ve been consistently getting my arse kicked. I have to be incredibly careful since anyone with half-decent PvP gear can tear me a new one in a couple of seconds.

Open world PvP is pretty self explanatory. It’s obviously a lot more active on the PvP server — I’ve yet to engage in any of it on my PvE server. On the rare occasions I actually see another person in Metropolis or Gotham, they are usually a hero. If they are of a more villainous persuasion they don’t seem to be affected by my threats and posturing. Again, the issue of low server population and lack of people under 30 rears it’s ugly head. I’m sensing a trend here. Upon hitting 30 heroes and villains can participate in some more goal orientated PvP, tied to missions. I tend to find these sorts of thing more entertaining when they have context. 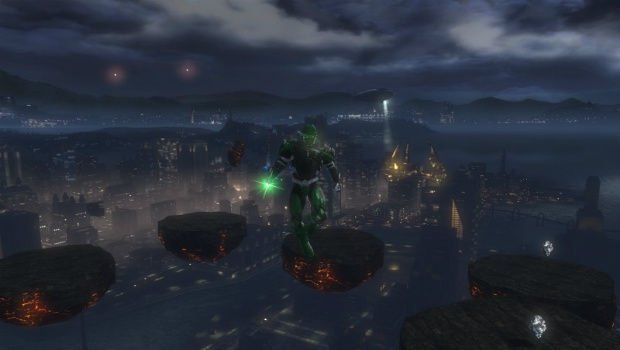 Pumped, psyched, generally more confident, Zentarim now faces his toughest challenges yet. All his hard work and tireless pursuit of justice have paid off. He’s ready to face even more dangerous opponents, perhaps even Braniac itself. No doubt there will be another chance to save Superman again, too. I swear, that guy needs rescuing more than Jimmy Olsen.

Next Issue — Hard Alerts which will probably hurt, Raids and f2p shenanigans (hurry up SOE!)