Fighting games on mobile are a dime a dozen. The tactile feedback of a standard controller or joystick setup is absent on phones – barring any peripheral attachment. In lieu of that, developers have attempted many different approaches to bring the action of the genre to the device. Some go with swipe controls. Others give a digital button scheme an honest-to-God shot. But perhaps the most common and successful on the platform are card fighters.

Not to be confused with digital trading card games, card fighters usually feature a mash-up of simple taps of the touchscreen with a more direct use of specific attack and defense cards. These cards are tied to a constantly refilling energy meter, limiting how often you can use them. It’s simple, it in no shape or form even comes close to scratching the technicality of a traditional fighter, but relegating advanced moves to these cards does allow for some pretty breathtaking action. Case in point: Dragon Ball Legends.

From Bandai Namco, Dragon Ball Legends launched for mobile devices earlier this month, continuing what has been an absolute banger of a year for the franchise’s gaming output. Dragon Ball FigtherZ may end up being one of the most watched games at this year’s EVO, and Legends may very well be the best mobile fighter to release in 2018.

I don’t follow Dragon Ball, so I’m not going to pretend to know much about all these characters to fully detail the plot of the story mode. In short, I play as Shallot, a new character and Saiyan with the tail still attached. Shallot is suffering from a catastrophic case of amnesia with a side effect of being a moody little shit. He arrives on a planet, Earth maybe I don’t really care, inundated with characters from the franchise across space and time. Multiple Bulmas, Gokus, Vegetas, etc. There is a tournament Shallot is invited to for later in the story, but most of the early chapters revolve around him being a basic grump to everyone he meets.

I haven’t watched an episode of the show since ‘90s Dragon Ball Z era, but the way the story mode is presented takes me back to those sunny afternoons spent at my best friend’s house. Every episode plays out the same way: there’s a little bit a dialog between the principal cast, an enemy shows up, I fight them in a spectacular battle, and the episode wraps up with a cliffhanger and a “To Be Continued.” It, ever so basically, captures that old feel of these serialized cartoons.

Because this is a free-to-play game, unlocking an episode has a cost associated with it. There are 10 energy points and each episode will drain at least one point from that meter. Microtransactions right now are limited to Chrono Crystals which are used to unlock new character cards at random. A single summon runs 100 crystals, though there is a discount on the first summon of each day. There are three different levels of character cards available – hero, extreme, and sparkling – and each level can be strengthened by getting repeat cards in a summon and by leveling up characters through training and the story.

As this is a card fighter, there isn’t much to the actual action of the game. It’s presented similar to the Dragon Ball Budokai Tenkaichi games with both fighters hovering in the air mixing button mashing melee strikes with long distance Ki Blasts. I can move my character left or right to avoid the blasts with a swipe of my finger, or slide up on the screen to send my fighter barreling towards my enemy for a close-up combo. Attacks tied to cards are more difficult to dodge and do far more damage. Each card takes up some power from a quickly refilling meter that I can fill faster by holding my finger on the screen. 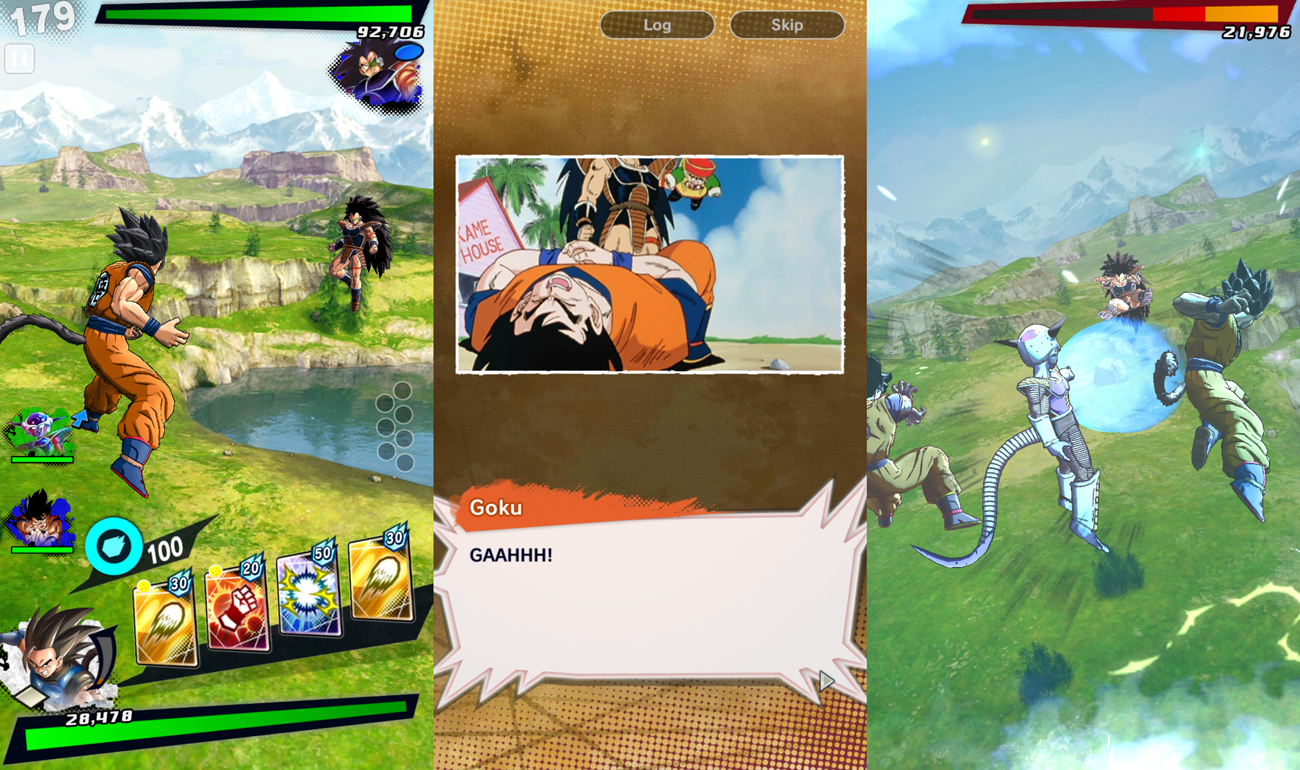 While Shallot is the main character of the story mode, I don’t always have to fight as him. Outside of certain battles, I can choose any three cards from the six I select for the group. All characters get XP upon victory, but those in battle received a cartoonish amount more. I’ve so far summoned three sparkling characters, the rarest of the bunch, and have been spending most of my time leveling them up for the PVP mode.

Characters have strengths and weaknesses against opponents depending on where they fall on the rock-paper-scissors battle scheme. Fighting against a character I’m weak against isn’t impossible, but it can drag the fight our far longer than it should, shining a spotlight on the cracks in game design. If you’ve played a mobile fighting game using the card set-up before, you’ve already experienced what Dragon Ball Legends has to offer. It’s not deep, I never really have full control over my character, and I don’t feel particularly accomplished when I win, but goddamn is this game beautiful.

I’m playing on a Moto Z2 Force and it runs flawlessly. Legends needs a constant internet connection to work, but even on my shitty T-Mobile service, it is far smoother than I imagined it would be. Dragon Ball Legends uses CriWare and uses it well. While it will in no way match the visual flair of FighterZ, it really is a sight to behold when Vegeta is unleashing a series of Kai Blasts, or when Goku summons a Kamehameha. It’s at its absolute best after I use enough cards to unlock all the Dragon Balls and unleash the Rising Rush, a crushing, spectacular attack using my trio of fighters that almost always results in an instant KO. Even the character summon screen is brilliant, depicting a battle between Goku and Frieza that culminates with my new character.

I don’t know how long this is going to keep my attention, but I’ve certainly stuck with it longer than similar mobile fighters. Dragon Ball Legends absolutely raises the bar for presentation among mobile fighters, and even if it doesn’t do much to raise the bar on mobile card fighting games, it’s still the best one I’ve played this year. Sorry, Tekken Mobile.