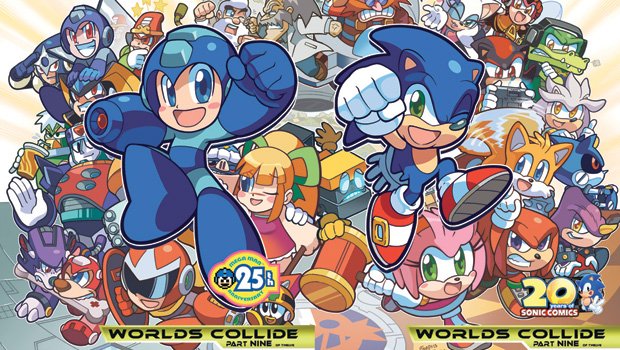 HNNNNNG! My heart can’t take much more of this! I think I’m going to slip into a coma before the Archie Sonic / Mega Man crossover even begins. But I’ve got to hold on! Just one month left!

To bring everyone up to speed, the “Worlds Collide” story arc will span 12 issues from the Mega Man, Sonic Universe, and Sonic the Hedgehog series, with chapters appearing in each of the three comics in turn from April through August. The arc is broken down further into three acts consisting of four issues apiece. Collectors will be treated to no shortage of cool variant covers depicting their fave heroes (and villains) in all sorts of wild and fan-service-y scenarios.

Archie has provided Destructoid with exclusive covers of Sonic #250, the beginning of the final act wherein the blue duo squares off against the mighty Wily Egg. These variants depict the Sega and Capcom gangs in a style reminiscent of Mega Man: Powered Up. So adorable! And is that Duo in the corner? Duo is in the story!? YES!

You may also notice that this issue, which arrives on July 3, marks 250 chapters of the Sonic comic. To celebrate, #250 is a massive 48 pages, with the second half containing a digitally remastered version of the very first Sonic issue. So beefy!