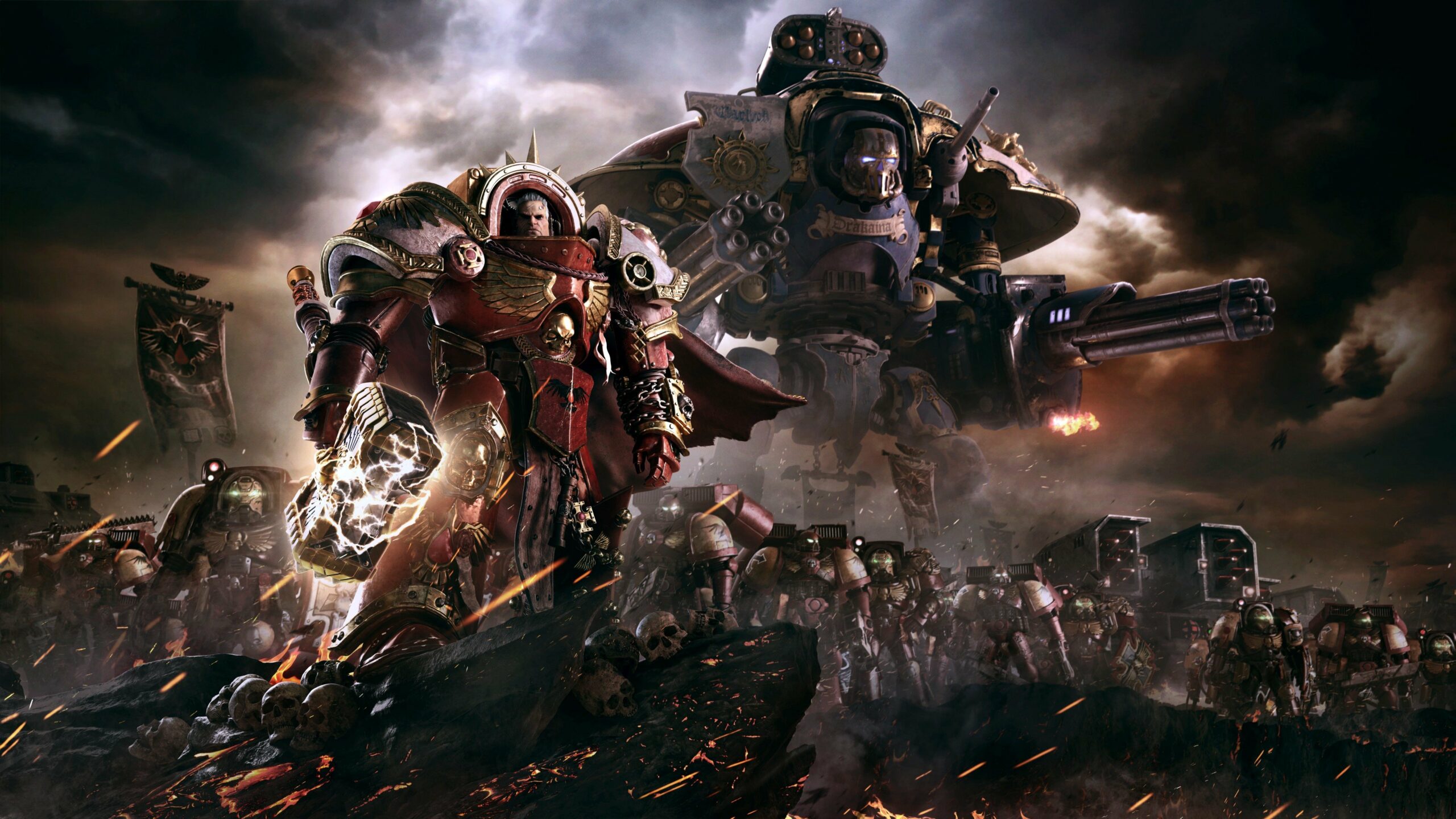 I can’t say I’ve ever been a particularly big fan of real-time strategy games’ multiplayer portions. I know that sounds crazy (seeing as how StarCraft is almost a national sport in Korea), but I like devising tactics and executing them against AI more than other humans. When playing against living beings, I typically don’t think as fast due to my lack of ability in the genre. I don’t do well with micromanaging or base building.

So Dawn of War II was more my speed when it came to exhibition matches. I liked that the game put a stronger emphasis on the action elements while relegating traditional-style RTS staples to specific game modes. The same as the campaign, you had a few “Champion” units and small squads that could be recovered from capture points, putting an emphasis on pushing forward and bringing the fight to the enemy instead of meticulously researching upgrades, placing buildings, and managing resources.

Still, I understand the appeal behind that style of gameplay. It rewards more careful thinking and cautious play. It doesn’t even slow down the pace of the game, if you’re able to quickly grasp the mechanics. That being said, Dawn of War III’s closed multiplayer beta showed me very little that I particularly find interesting about strategy games. 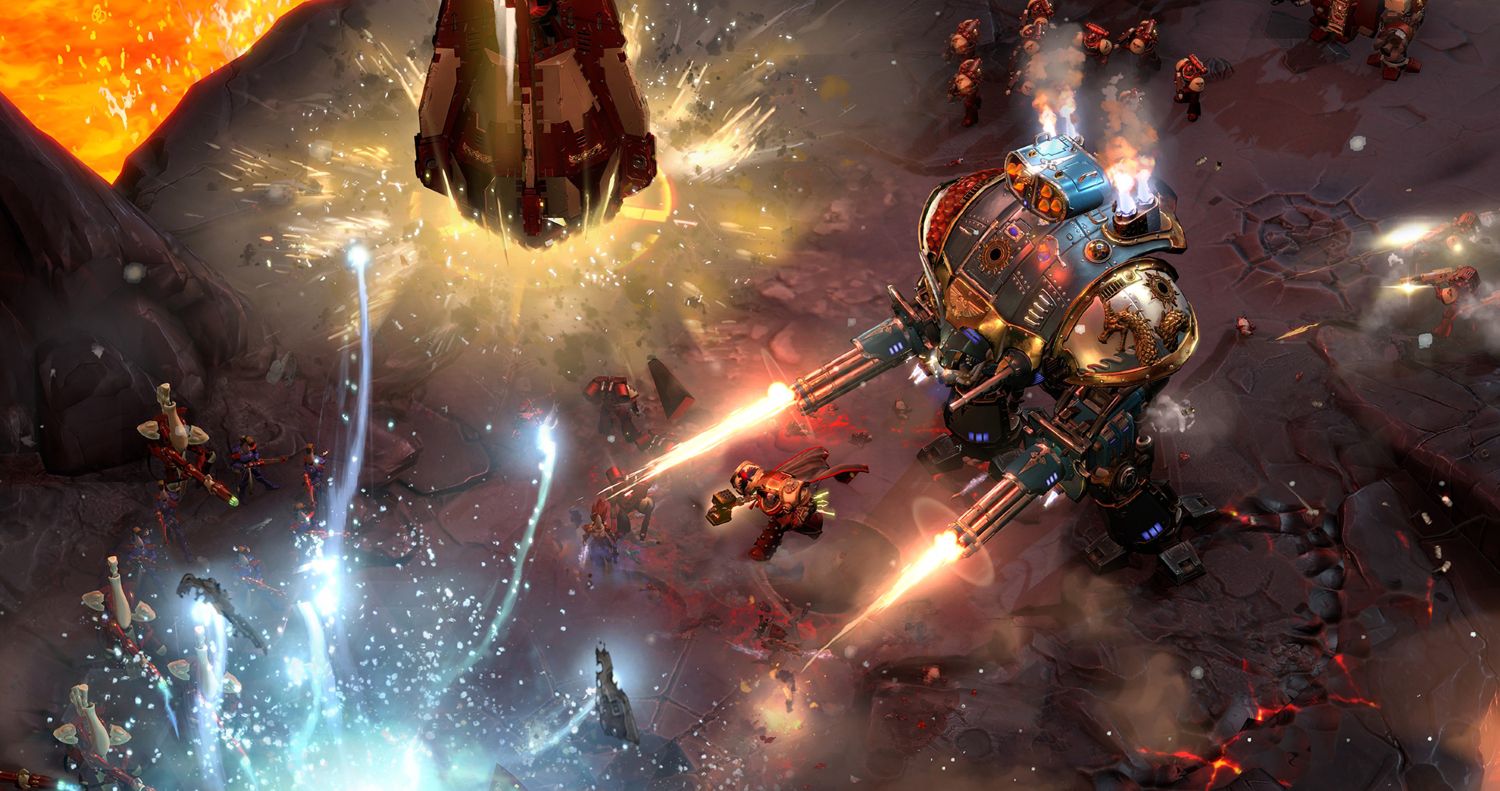 The basic concept is kind of a mash-up between the original Dawn of War and its sequel along with elements also seen in MOBAs (Multiplayer Online Battle Arena). You get some simple base building, basic unit training, “Elite Heroes,” and a central power core for each team that is the main objective. Capture points around the map help you push forward and gain resources for building more stuff, but the bulk of the action is seemingly meant to come from the “Elite” units and their constant threat.

You’ll have access to these Elite units once you gain enough of a specific resource. This resource can be sped up through the acquisition of capture points around the map, but you’ll also be given them over time. Once you have enough points, you can summon your Elite units into battle and plop them close to any of your captured points.

Different and stronger units have higher or lower costs, so the theory is that early game Elites are cheaper and are supposed to be leading small squads while the later-game units are expensive and can deal greater damage. I rarely called in more than the basic unit because he got wrecked pretty damn fast. Maybe I just used him wrong, but it’s the same sensation I’ve had in the few MOBAs I’ve played in the past (League of Legends and Heroes of the Storm). 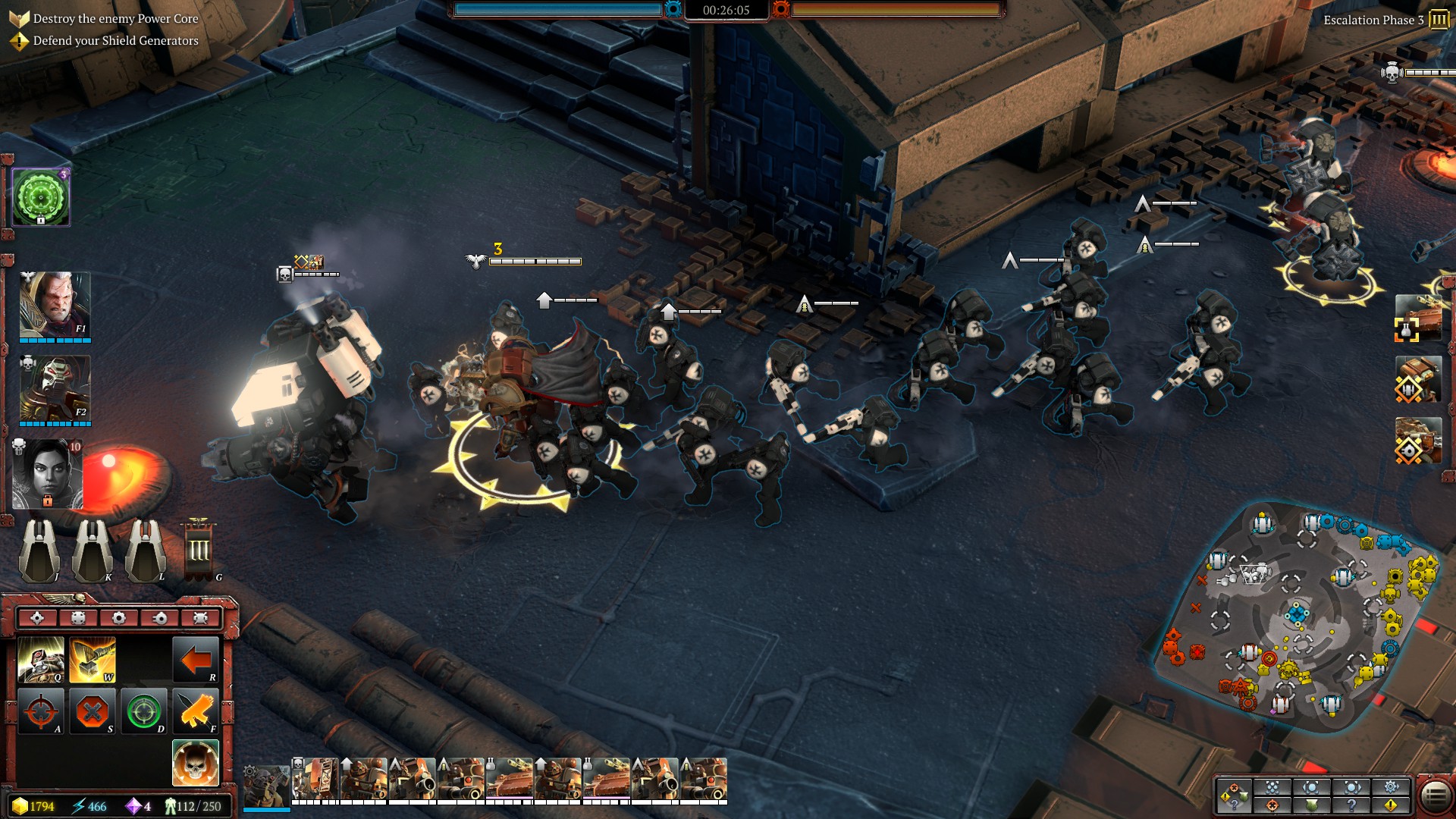 I never understood how this supposedly battle-hardened warrior gets taken out so quickly by simple units. With three small squads, your standard Elite unit is toast. You might as well save the Elite Points and spend them on either a stronger unit down the line or your faction specific ability. While it made more sense with how Dawn of War II handled the Champions (basically regular units with special abilities), this just feels like taking elements from a popular sub-genre and shoving them in to differentiate DoW III from its predecessors.

The general pace of battles is also on the sluggish side. Despite steamrolling the opposition in my first match, it took around 30 minutes to reach the conclusion. Everyone else seemed more focused on going through the middle of the map, so I stuck to the outskirts and spent time gathering resources and buying some upgrades for my units.

I only got to try out the Space Marines, but I was really in love with their Orbital Drop ability. I’m not sure what the official name was, but you can call in an orbital drop of any unlocked unit and have them quickly ready for battle with the click of a button. The drop, itself, also acts as an attack and can catch enemies off guard. If you have a lot of requisition points, you can just order a few tanks, drop them directly where they need to be, and have at it. Each faction has a specific ability, so that is pretty interesting.

This led to the end of my first match where I had an Elite unit, six small squads, one specialty squad, and four tanks all blasting away at the opposing team’s power core. Having an abundance of resources definitely helps in this regard. Team games have a shared pool of resources, so you can potentially focus more on army building while your team captures points. 1V1 requires you to do everything. 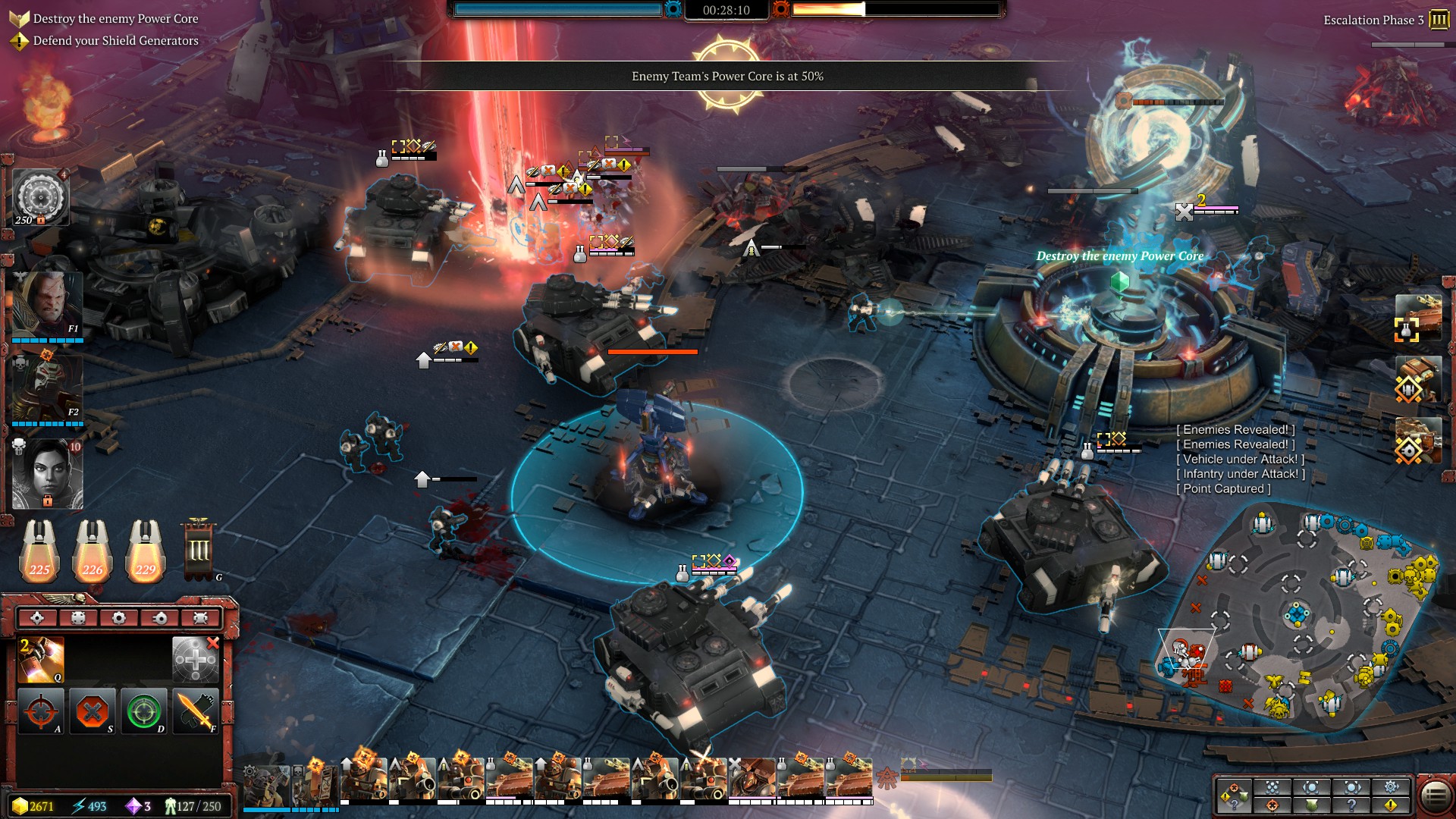 Before each match, you can customize a loadout for battle that has specific Elites and passive buffs. Your Elite units can be leveled up after repeated use and you can unlock different abilities and buffs to try out. That aspect I strongly dislike, even if I was partial to the specific abilities I had chosen. The whole idea behind RTS games is that the battlefield is level and players are building armies to assault each other, not picking buffs to gain an advantage. You win because you were better at resource management, not because you’ve leveled up your Elite and he has “better” powers.

The closed beta had access to one map for each team variation. There was a map for 1V1, 2V2 and 3V3 play. While that is technically three maps, each one followed the same standard structure of three lanes. There was nothing different going on, aesthetically, between the maps I played.

From my experience as the Space Marines, cover was also massively scaled back from DoW II. There weren’t buildings to garrison my units or even trenches to hide in. For that matter, there was nothing unique to explore on any of the maps. It feels like most of the window dressing was axed for the sake of playability, leaving you with only the units you’ve selected beforehand and basic ground to walk on. 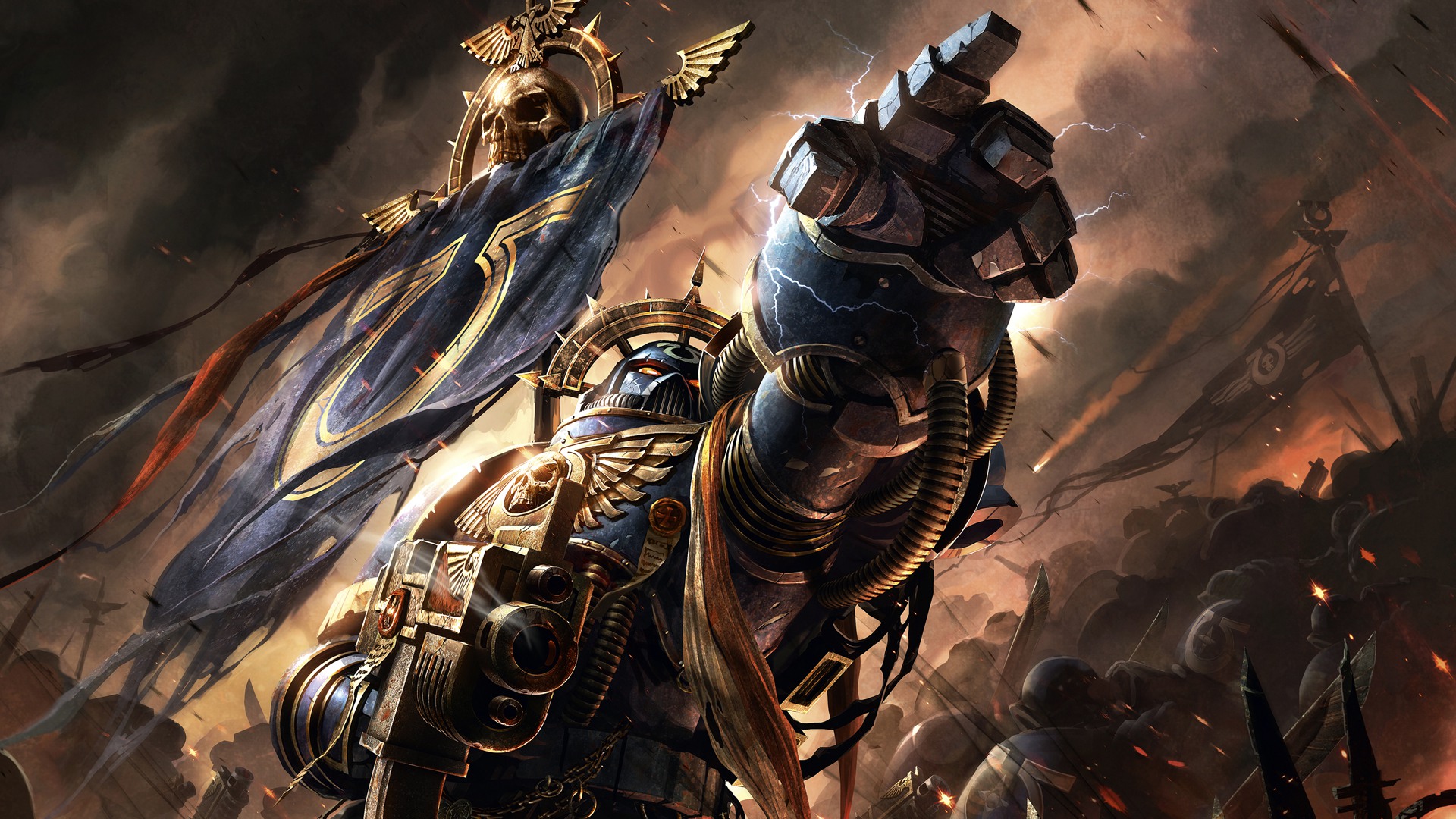 As for how the main game will turn out, I don’t really know. The multiplayer portion in the final Dawn of War II expansion was basically a regular RTS game, so who’s to say if other options won’t be available in post-release patches. The campaign could also be radically different from anything I played here, which might placate my indifference to the multiplayer portion. At least there was no lag during the match and the performance was fine in this beta (though I am on a GTX 1060).

We’ll find out when the final game launches. I’m sure there are going to be people who immediately take to the changes found in DoW III, but it wasn’t my cup of tea. I’m glad some of the base building is back, but this feels more like a compromise in an attempt to please everyone instead of trying to achieve a unique vision.

[I apologize for factual inaccuracies in the original write-up. This hands-on preview of the closed beta has been amended.]