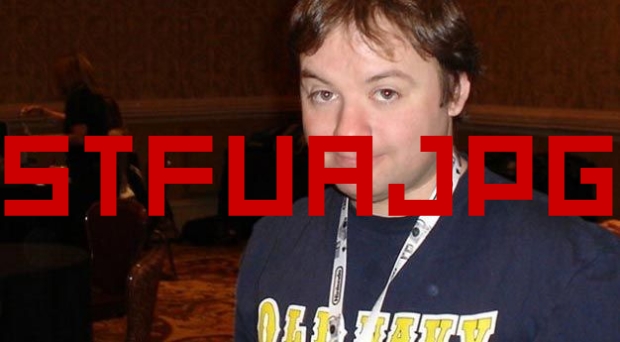 Destructoid is no stranger to the words flying out of David Jaffe’s mouth. In fact those words have flown directly at us. In short (if two sentences are too long for you), David Jaffe has a big mouth and he likes to run it. However, it can get him in trouble or in his mind it can get him misunderstood. Since he’s tired of being misrepresented by these here internets Jaffe has decided to “JUST SHUT THE F— UP for the next 6 months.” Evidently, the final straw was a recent internet argument between Jaffe and a blogger about used game sales.

Jaffe says that, “No matter how clear you make yourself, people simply ignore what you have to say. And so I will now forever be the guy who opposed to used game sales (which I am not).” As such Jaffe has promised to shut up for six months. He will still be doing interviews and basic PR for his upcoming games, but he will be stopping all personal blogging and twittering. It doesn’t end there though — and here is where you come in — Jaffe says he will give away a free game to the first three people who catch him breaking his promise.

The argument he got in was pretty banal and has been all over the internet 50 million times already, but now that it has the possible outcome of free games for people it’s got a little interesting. I suggest we all keep an eagle on on Mr. Jaffe and check every IP on every comment on every post about used games, Jaffe’s games or Jaffe himself.