[In “Dat DLC,” we check out some recent downloadable content to give you an impression of what you may or may not have missed out on.]

After tinkering with the gender-swapped versions of the existing four young heroes in Dungeon Defenders, it was about time for a truly new class. The Barbarian fulfills this role on the PC version, with melee-oriented skills and dual wielding as the main draws.

For $2.99, a new hero class may be a no-brainer for a lot of Dungeon Defenders fans who have been waiting for a long time to try out a new type of character. But how does the Barbarian play, and does he hold up against the other heroes?

If the Apprentice is on one end of the “Defense first, Offense later” spectrum and the monk is on the opposite end, the Barbarian sits about 20 lightyears beyond the Monk. With no defensive towers at all, the Barbarian is all about tanking and pure offense thanks to his ability to dual wield Squire weapons. Instead of static defenses, he has “stances” that affect his stats and attacks. Beside these stances, the Barbarian also has a two special abilities to boost his mobility and damage output.

The Barbarian also has a rather cumbersome special combo attack. If you alternate your left and right weapon attacks five times, he’ll do a super slice-and-dice move that does increased damage in a wide forward arc. This can be rather hard to pull off in the heat of battle, and depending on your mouse finger dexterity it can be counter productive to utilizing weapon speed bonuses. Thankfully, you can also hold down both mouse buttons to perform this combo, or assign it to another mouse button using whatever software you use for your mouse. 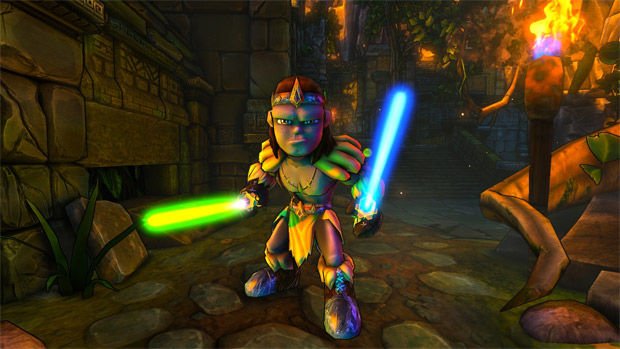 Stances can be turned on and they will drain mana over time. Initially, this mana drain is manageable, but it quickly speeds up until you can’t just sustain it with the mana you get from killing enemies anymore. You can have two of these active at the same time, and turning off a stance will start a short cooldown timer before you can turn it on again. The game does a rather poor job of communicating what spending skill points on stances actually does, but to the best of my knowledge investing skill points in stances tends to stall the increased mana drain you’ll suffer when you keep a stance on for an extended period of time, or it moderates the negative aspects of certain stances.

This stance increases the movement and attack speeds, as well as your jump height. It also increases knockback for your many attacks. It comes at a cost, however, as you’ll suffer a pretty big penalty to your damage output.

Another downside to using this stance for attacking is that the Barbarian will generally kind of lock on to an enemy when attacking it, similar to the Squire or Monk. The increased knockback can sometimes lead to pushing one enemy away from his group, while the group itself presses onwards to your Eternia Crystal. While this is a problem you’ll have to work around with most melee classes, it just happens a lot faster with Tornado Stance enabled.

Somewhat of an odd stance, this one. It lets you stun enemies with each hit, but it doesn’t work on Ogres. You shouldn’t really be in any position where enemies get close enough to your Eternia Crystals for this stance to be useful, but perhaps it’s helpful on Nightmare difficulty. The big downside here is that each hit costs you health. The more points you put into this stance, the less health you’ll lose.

When you run low on health, you can switch to Siphon Stance. Alternatively, you can just use both of them at the same time.

Your typical vampire stance. Each hit gives you health, but while it’s active it also lowers your resistances which may lead to a net health loss if you don’t pay attention. If you can just slice through a group of enemies, Siphon Stance lets you heal up without spending mana and time on healing yourself. Of course, like every stance, having it active will drain your mana anyway, so it’s more about not having to take the time to stand still and heal.

Turtle Stance is the tank stance. Acting like a shield of sorts, you’ll take reduced damage while your movement speed takes a big hit. After a recent patch, you also won’t get stunned or webbed by spiders anymore when you are in Turtle Stance (yes!). Think blocking, but with the ability to keep attacking albeit with a slower speed.

Hawk Stance is rather odd. It costs 120 mana to make your next attack deal a potentially huge amount of damage. The amount of damage is said to scale with the physical damage of your weapon(s), but I found it pretty hard to figure out exactly how to calculate the damage potential. You can use it against Ogres, but after using the Hawk Stance super attack, you’ll be stunned for a few seconds. It’s nothing that you won’t survive on most difficulties, but you’ll have to be a pretty skilled player to get the most of this. Chances are you’ll often forget to use this since it’s mapped to the 0 button by default. 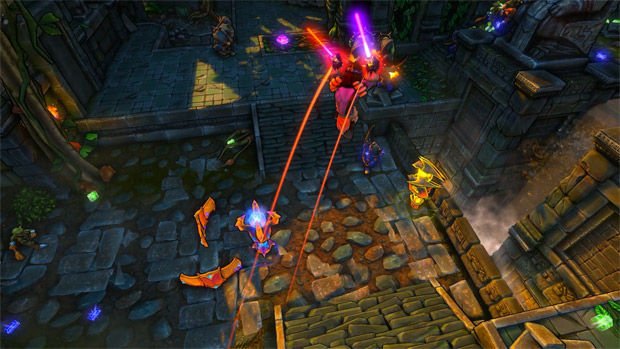 Arguably the most fun and effective ability the Barbarian has, Battle Leap lets you jump a fair distance and hit a bunch of enemies for increased damage as you land. There’s a bit of a cooldown to keep you from spamming it, but it helps the Barbarian become a bit more mobile. You can also use it to jump to higher areas on some levels, which saves you the trouble of running over to wherever the action is.

This ability is pretty basic. You hit a few enemies in a wide arc in front of you, and finish with a ground pound. The area-of-effect isn’t very large, but it can help you deal some extra damage when you are in the thick of it.

As you can see from the stances, the Barbarian is a pure combat support character. He’s useless in solo — even more so than the Monk — and he’s also clearly tailored to veteran players who have a dedicated group to play with; the types who may want to bother with learning how to most effectively use and combine his stances and abilities on harder difficulties. He’s also not without his problems.

The stances can be useful, but they don’t always make you feel as powerful as they are supposed to. Using Tornado Stance and holding down the mouse buttons lets you cut through waves pretty easily, picking up mana as you go to sustain the buff for quite a while. However, it also made me knock back enemies and follow them off a cliff, mid-combo, in some levels. Lightning Stance is easy to forget about, since you’re usually too occupied with simply hacking and slashing your way to victory to care about keeping enemies stunned instead of staggered. It’s the same with the Hawk Stance; unless you encounter an Ogre or you just need to burn mana, you’ll likely forget all about it.

Turtle Stance is still good for tanking, especially when used with Siphon Stance to keep your health up. Then again, tanking a boss or an Ogre is something the Squire and Countess could already do. When you compare the Barbarian with the Countess, you’re looking at a dual wielder vs. another high damage output character who can also build defenses. The Countess’ Joust ability might also be more useful to some players who like to skewer through entire lines of enemies, even if you’ll probably run off a cliff about as often as you will do so with the Barbarian. 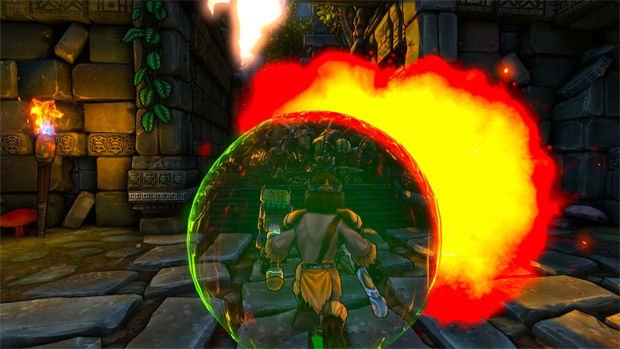 Another issue that pops up when playing the Barbarian is that the stances’ default key mapping is counter-intuitive for combat usage. If you use the default WASD and 1-0 key layout for movement and abilities/stances, you have to stretch your fingers pretty far to activate and deactivate the stances. For other classes, this is never a problem; at worst you’ll blindly hit the wrong numeral key, but you can always see what you are about to place before you actually place it. Plus, you hardly ever place a defense when you are under attack. With stances, you don’t want to activate them unless you are already close to enemies. After all, the closer you are, the less mana you’ll lose, and you don’t really want to move your left hand away from the WASD keys when you’re about to enter combat.

For both the stances and the basic attacks, it’s best if you tweak your key layout and mouse bindings to match the Barbarian’s playstyle. Now, this isn’t the hardest thing to do, but it’s silly that you have to work around the character’s design in such a way. Especially if you are more of a solo player who likes to swap characters between waves, this is an unnecessary annoyance. Can you imagine if you had to remap all your keys if you switched from one character to another in Baldur’s Gate or Dragon Age?

This lack of attention to practical detail is evident in the act of equiping your dual wield weapons as well. You’ll only have one weapon to compare to in your item box, even if you have two of them equipped. If you just found or bought an amazing weapon, you can’t choose which equipped weapon you want to replace it with. You have to go to your hero outfit menu and manually look at which weapon you placed where, remove the one you want to replace, and then equip the new one you want in the inventory. And even then, it’s a matter of guesswork at first until you know if it will replace the one weapon you had already equiped, or if it will end up in the second weapon slot. Again, it’s an unnecessary bother.

Having said that, it’s a new class to play with if you’ve already reached level 74 with all the other heroes. For a measly $2.99, it can be worth checking out if you are still playing Dungeon Defenders a lot and if you are looking for fresh ways to extend your playtime; perhaps you can even use it as a reason to finally move from Open to Ranked mode with a team of friends. The Barbarian is so dependent on a good team, however, that you’ll want to have a bunch of other people to rely on. And even then, you’ll have to really focus on him to get the most out of the new hero.

If you main an Apprentice or Huntress and you’ve never tried out the Squire or Monk, it might be worth giving the Barbarian a try. If you are already running through Nightmare with a level 74 Squire or Monk, the Barbarian may not be interesting enough to bother with grinding him to level 74. He’s not fundamentally different enough to warrant jumping to a new melee class, and the annoyances from inventory management and controls may prove too bothersome for some.

Still, if you are serious about Dungeon Defenders, the Barbarian hero class is not absolutely terrible either, so it’s really up to whether or not you are the kind of hardcore player who is most likely willing to overlook his faults in order to enjoy him. Perhaps some future patches will improve the Barbarian and address the inventory issues, but for now he has a bit of a limited appeal.