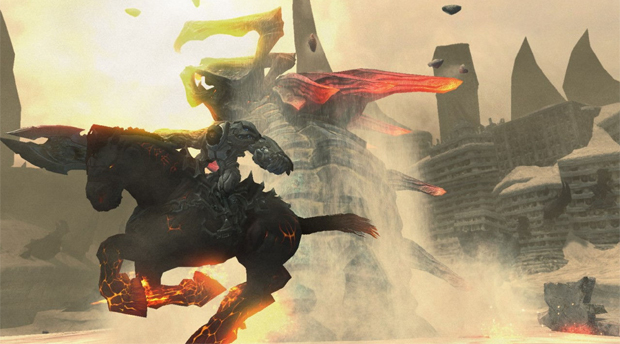 After the jump, you can check out a trailer THQ recently released for Darksiders. Thing is, I’m either crazy or I’ve absolutely seen this before. I seem to recall car throwing, epic horseback riding and a giant worm cropping up sometime in the past, but I haven’t found any evidence to support my admittedly spotty memory. So, worst case scenario, you get it again.

On a largely unrelated note, do you know who I think really nailed the Four Horsemen of the Apocalypse? Neil Gaiman and Terry Pratchett. Their vision of War, Famine, Pestilence and Death were absolutely brilliant interpretations. If you haven’t read Good Omens, I highly recommend it. A bit trite at times, but there’s something really appealing about a confused Antichrist with an angel and a devil on each shoulder who want nothing more than to stave off the Apocalypse and keep their cushy jobs.

Hit the jump to see some CGI footage of Darksiders.